I’m not exactly sure when we started our New Year’s Eve Feast for Two, but we have been doing this for quite a few years now.

When we were a “younger couple,” we would go out. For a few years we did the “NYE Packages” of dinner, dancing, hotel room, breakfast the next day, etc. We are not a fan on driving on NYE night. (My brother used to refer to it as amateur night – drinking reference.) So, we would splurge on a package deal and stay safely in one place. 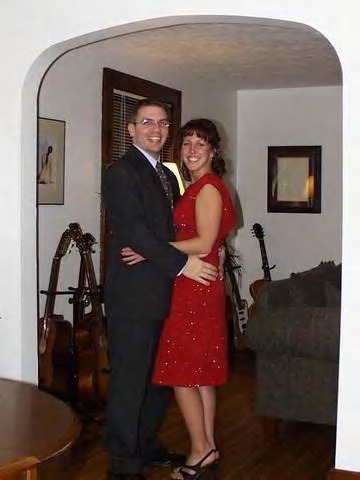 Above: Oh my, here is our very first New Year’s Eve together when we were dating.
All dressed up and ready for dining and dancing!

Well, those days – although fun – have come and gone. And now I think we do something even BETTER.

We make a Feast for Two every New Year’s Eve and dine all night!

In recent years, Mr. Gordon and I began switching off on deciding the menu and cooking the dishes. Although we still have a few weeks left before the end of the year meal, I am already in planning mode. This year is my turn in the kitchen. But first, a blog appetizer: a few photos from New Year’s Eve dinners past…

If I remember correctly, we started our Feast for Two yearly celebration with several sushi dinners – and yes, we bought everything and rolled the sushi ourselves! (Can’t beat Wegmans for its sashimi-grade fish.) 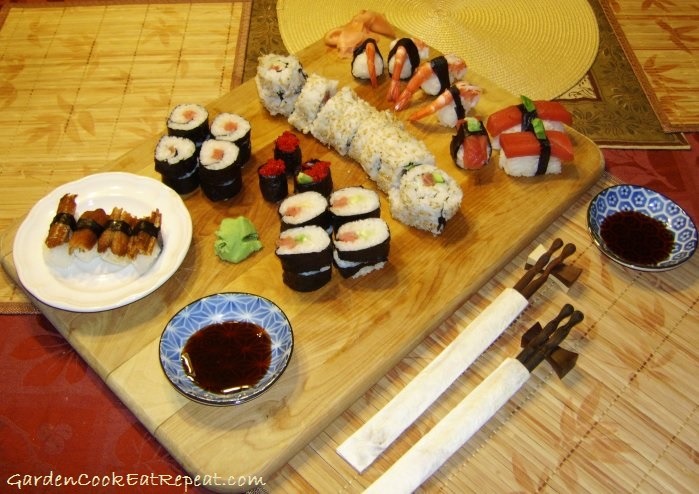 We kept the sushi-themed feast the next year, too. And we increased our offerings. AND we started drawing up menus… We named the menu after my Mother that year. 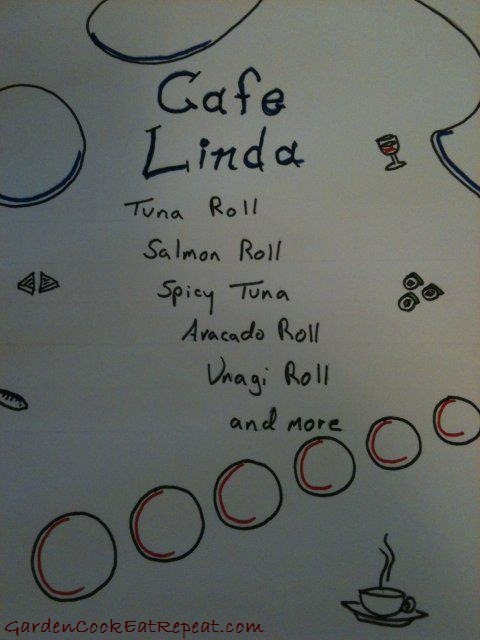 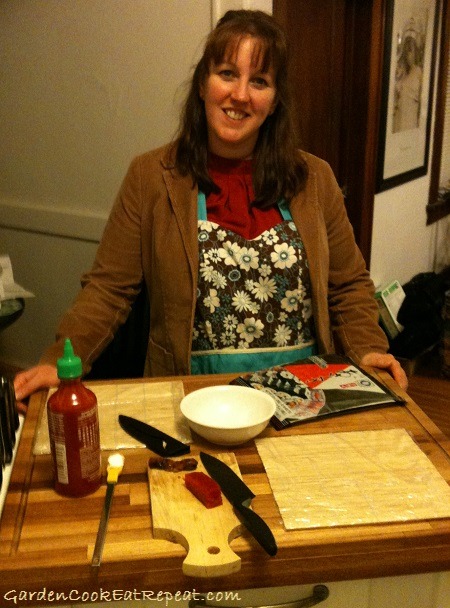 Our city house tiny kitchen – we had a rolling butcher block that came in quite handy. 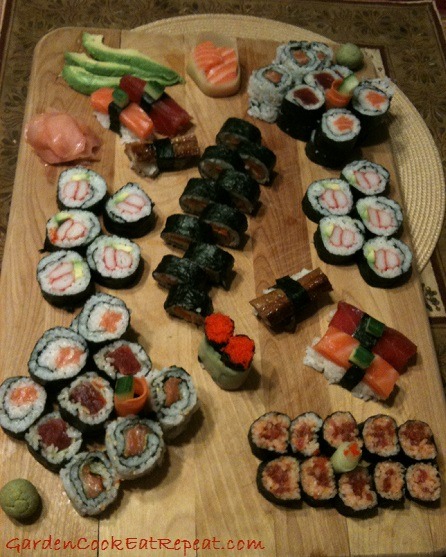 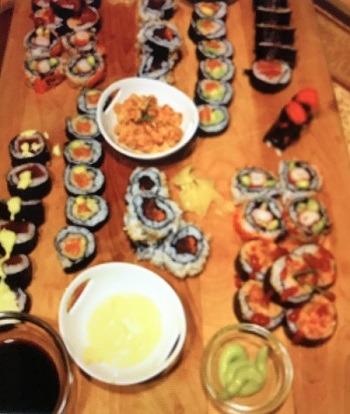 We switched gears in 2014 – Surf and Turf! Creamed onions, steak, and lobster tail. 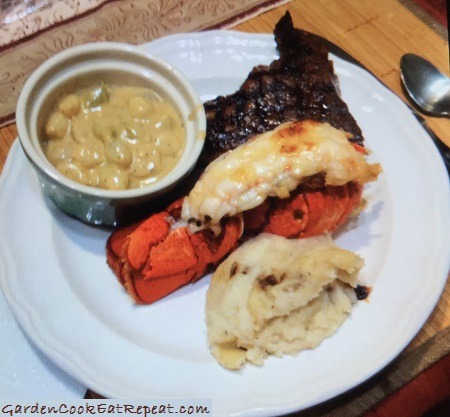 Then we seemed to either not take many photos – unlikely! – or I lost them. I’m fairly certain we did surf and turf again in 2015 into 2016… Maybe even crab legs and steak. Hmm. 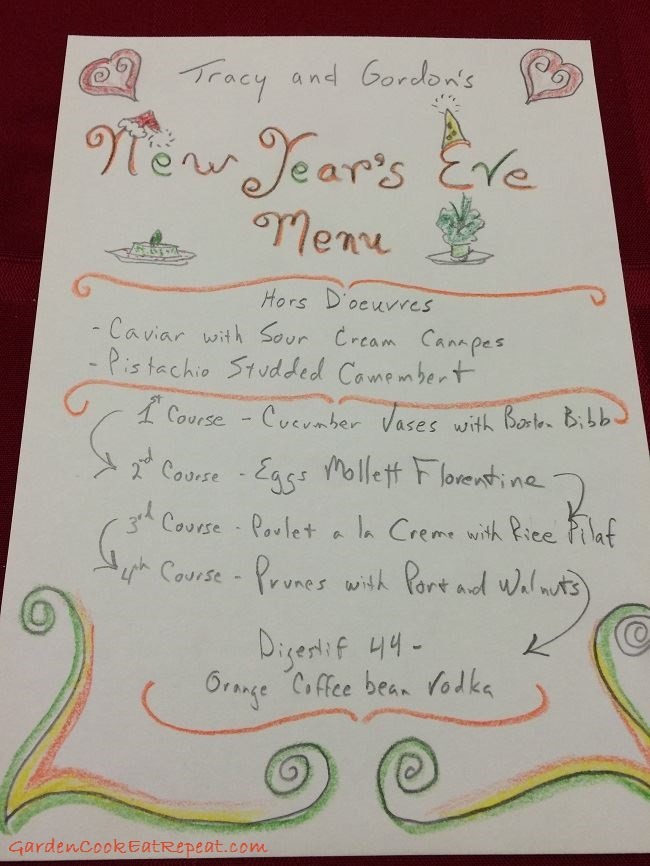 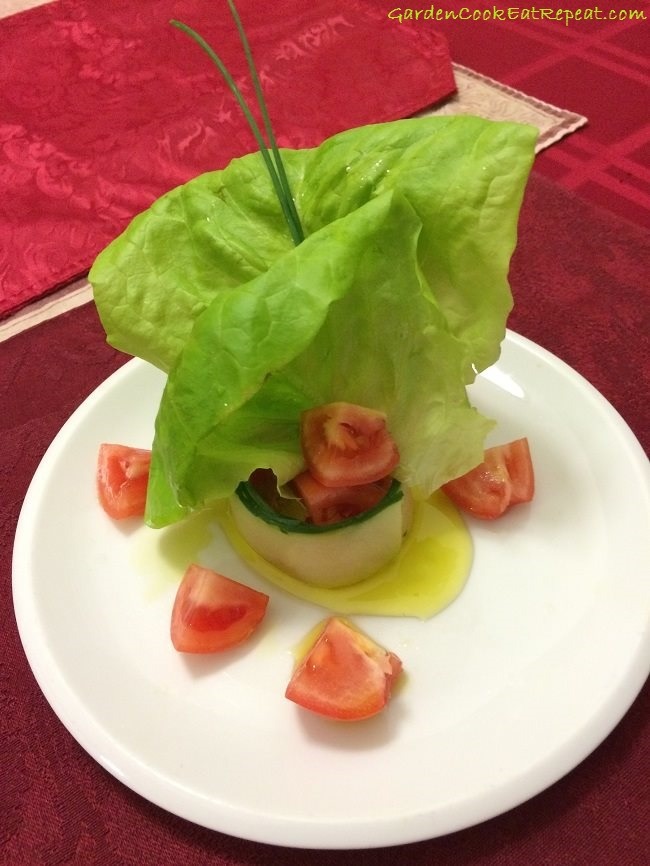 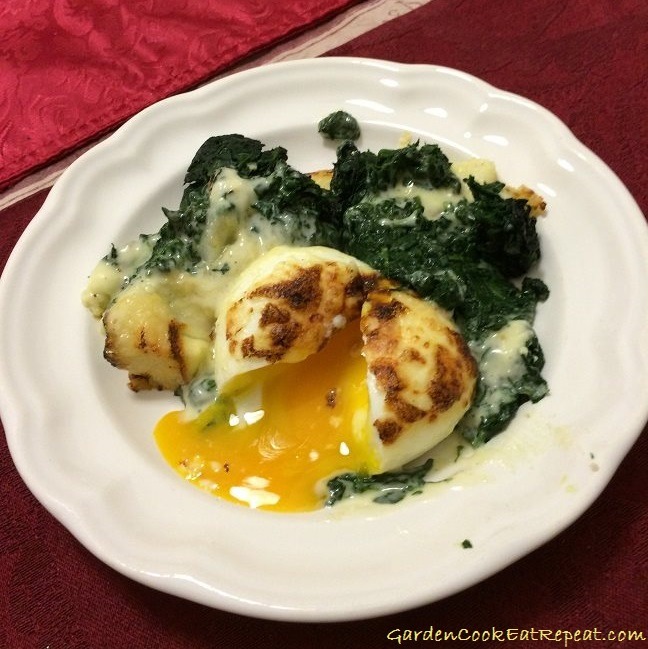 Oh my! The egg is boiled 6 minutes and then plunged into ice water. When it’s time to broil the dish, in goes the spinach, sauce with egg and nutmeg, and Gruyere and Parmesan cheese on top. The yolk is still delightfully runny. Such an amazing combination! 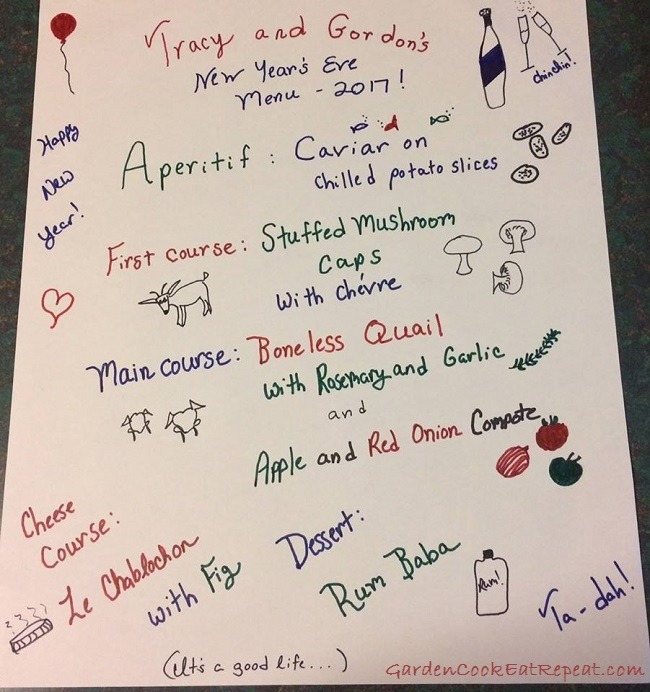 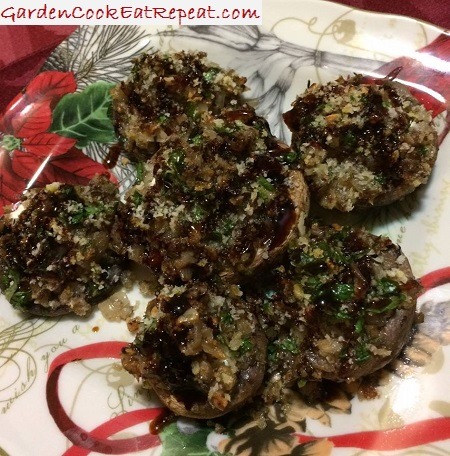 One never says no to stuffed mushrooms.

Fresh thyme and garlic… drizzled with balsamic vinegar glaze. Recipe from French Taste by Laura Calder. (Photogenically, the plate was not the best choice, I know. But these mushrooms ROCKED.) 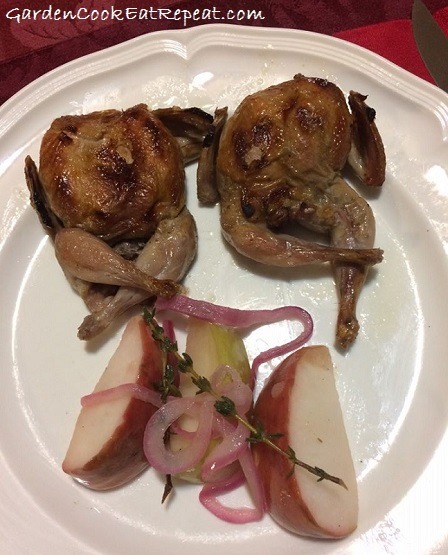 I honestly do not think I’ve ever eaten quail until I baked this dish. Very nice! 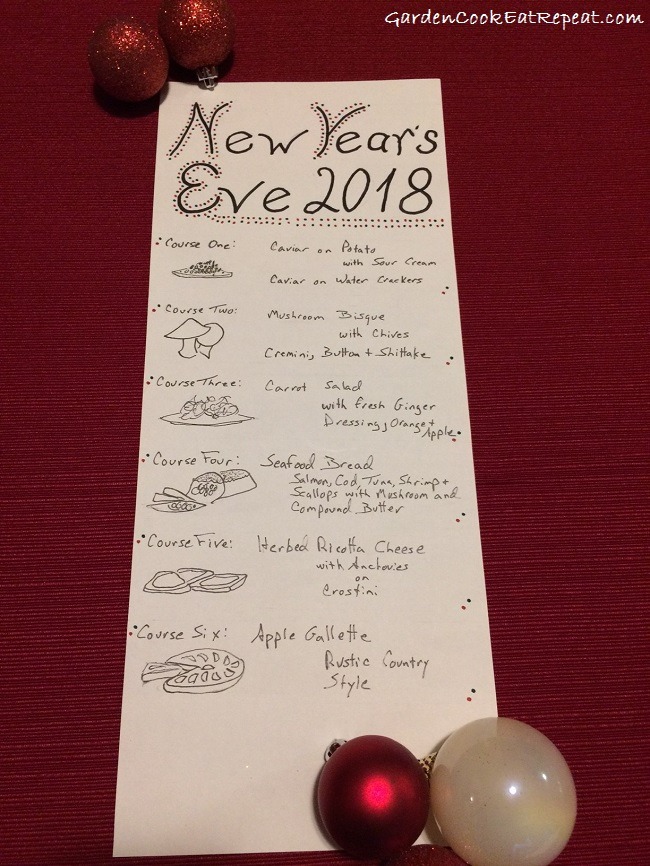 The Seafood Loaf (Fish Bread) is something we wanted to try for years! And as special as this is for New Year’s Eve, you could make this any time. Truly very good. 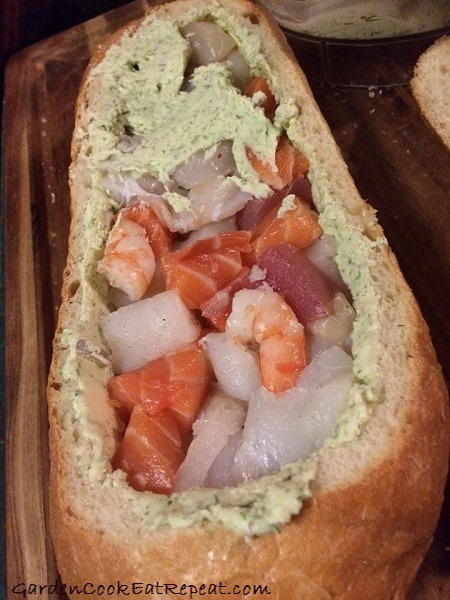 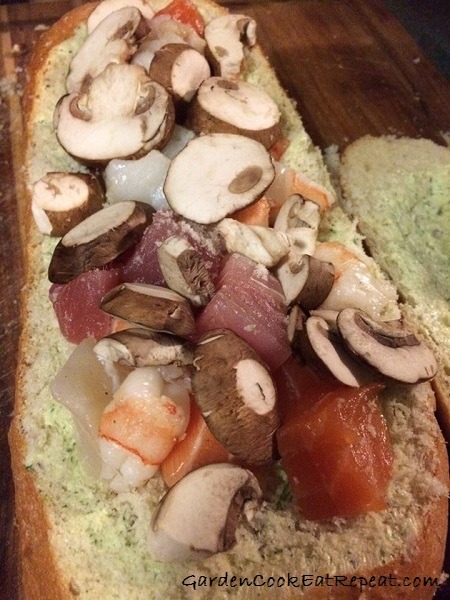 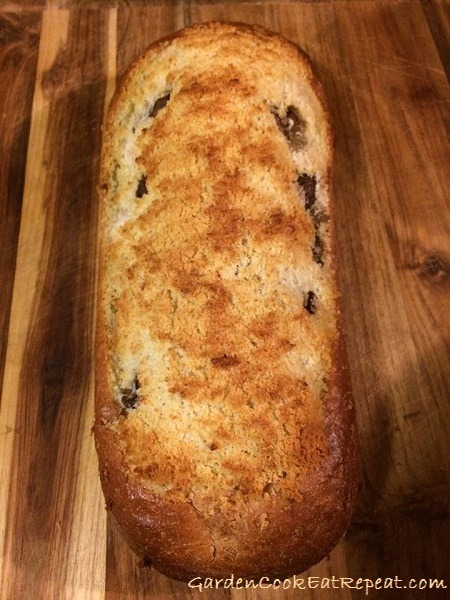 And possibly from this old, well-used when I was younger, and cook-stained Betty Crocker’s Dinner for Two Cookbook! 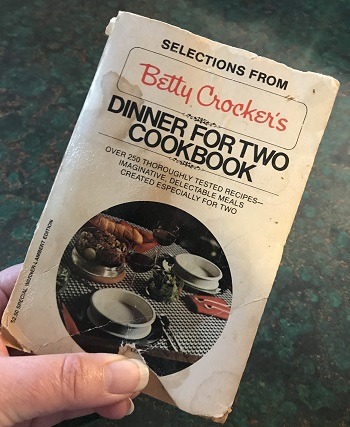 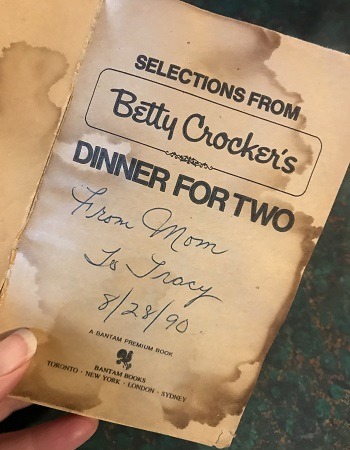 UPDATE: The Menu – and photos from our feast! Click here!

In the meantime, what are YOUR New Year’s Even plans? Even more importantly, what are your NYE FOOD plans? 😀 Please share in a comment below!