Oh, I could have come up with many different post titles to hint at what I did / did not do.

First, let me start by saying you still might have enough time to make 44 – if you can get your hands on organic oranges ASAP.

Let me share one philosophical note, and then I’ll continue with my story/recipe. We have to remember that we are all interconnected on this planet. The horrible fires in California impacted more than the people, animals, and plant-life living there. I was reminded of this when I tried to buy organic oranges a week ago. The produce employee told me that although the organic orange groves they buy from in California have not caught fire, the smoke has had an impact. My NYS grocery store – and the others around here, we checked – have not been able to get any. Now, not being able to get oranges is certainly not a big deal. Losing homes, lives, land, businesses in California because of the fires? Big deal. My heart goes out to those suffering because of these losses.

But it’s a reminder, folks. We are ALL interconnected. It’s not just them. This world is an us.

Now, onto my story and maybe even a new recipe for you!

So, we make a delicious vodka-based liquor about this time every year called 44. You can read about it here. We got the recipe from favorite author Laura Calder. It’s actually the last recipe in her cookbook French Taste! (Highly recommend her cookbooks!)

One of the ingredients is espresso coffee beans. Actually, 44 espresso beans.

So, on September 8, I started my 44. (The finished product pictured below.) 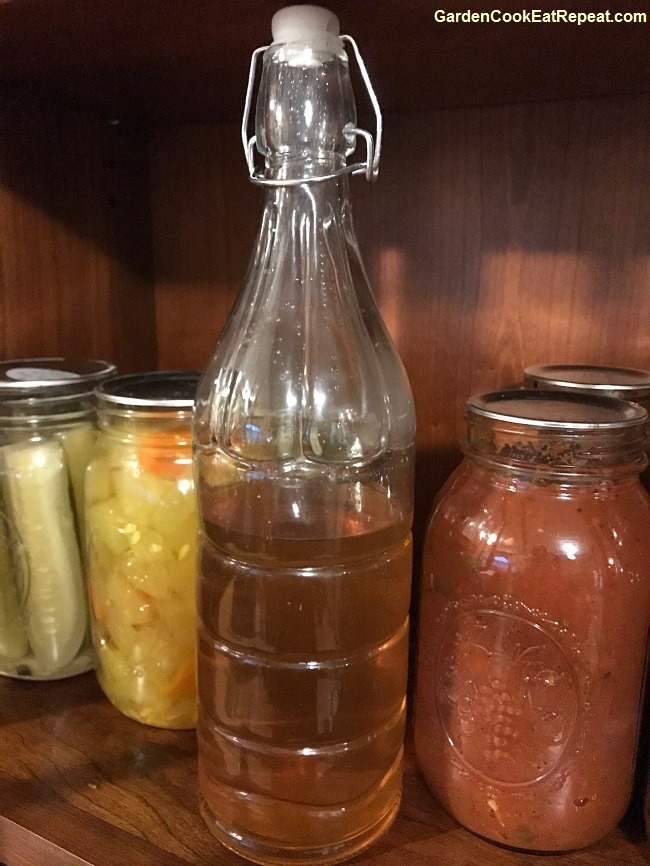 I gathered my ingredients…including 44 cloves.

We decided to try a different brand of vodka this time around. Since we had plenty of time before Christmas, I only made one bottle. I wanted to make sure that the “new” brand of vodka would taste as good as the brand we usually use. It would still give me enough time to do batches before Christmas to give as gifts.

“Oh, how smart and prepared I am!” I thought.

So, we made the 44 test batch. I stuffed 44 cloves into 2 organic oranges. Into the jar they went with the vodka and the sugar.

“Hmm, it’s good, but it does taste different,” I said to Mr. Gordon. He said maybe a little different, but he liked it. We decided that the new vodka would work. That weekend, I bought 3 bottles of vodka for the “gift batch” of 44.

Now, I was unable to get organic oranges at our usual grocery store, and while I was making some calls looking for a place selling organic oranges, I was sipping a teeny, tiny glass of the test 44 mixture. It was good… but I just couldn’t quite put my finger on what was different. I just couldn’t get that smooth, coffee liquor finish.

I did a face palm. What was I thinking? I studded the oranges in the test batch with 44 CLOVES, not 44 espresso coffee beans! I didn’t make Orange Coffee Liquor… I made Orange CLOVE Liquor!

The moral of the story… read the dang recipe, even if you have made it plenty of times before.

Well, now I had 3 bottles of vodka, sugar, and espresso beans, but no organic oranges. You need to use organic because the oranges are in the vodka for 44 days with their skins on, and you do not want to use oranges that have been sprayed with pesticides.

So what do you do when life does not give you oranges?

You look around for what you have!

I have… oh, about 200 Joe’s Long Cayenne Peppers reddening and drying in my kitchen and spare bedroom. So online I went, Googling cayenne pepper vodka.

Well, from the few recipes I looked at, they only called for 2 ingredients:

The timing, however, varied greatly. One recipe said 24 hours (doubt that), another said “a few weeks.”

We have decided to go with 3 weeks and….

Sometimes your “great ideas”are not so great when you actually test them out in the kitchen. The cayenne pepper vodka was one of them. While we had planned to marinate the peppers in the vodka for 3 weeks, we thought it wise to test after 2.

It was not good. No no no! Mr. Gordon and I LOVE hot and spicy foods, but this was so hot it made us both rather ill-feeling. And we only took a couple of sips. We also decided that it would not even be salvageable for use in cooking (like the vodka blush sauce). We definitely would not want to give this as a gift!

Even if it looked pretty. 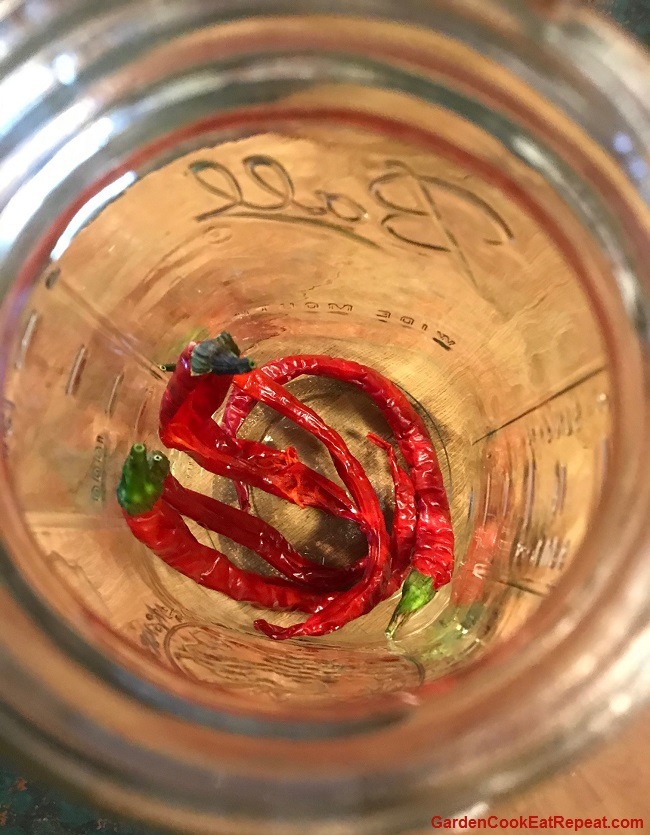 This is part of what we do. We test out our ideas in the kitchen. We typically have some success (think of the cloves in the 44 recipe I described above – an accident that still turned out to be good), but there are times like vodka-hot pepper that just really flop.

Maybe there’s a great cayenne pepper vodka recipe out there. But I think Mr. Gordon and I will leave it to someone else.

Any of your “lemons” turned into lemonade?

Or, coffee beans into cloves? 😉

Home Cook’s Warning – A final note on hot peppers in the kitchen.

You REALLY want to wear plastic food-grade gloves whenever you are handling/cutting hot peppers like cayennes. The cayenne pepper WILL stain your fingers and coat them with juices that can sit on your skin for days. Do not touch the peppers and then your eyes. It will burn and can cause real severe eye health problems. Even after washing your hands traces of pepper juice can remain on your skin. Please wear gloves when handling, cutting, and scraping the cayenne peppers (any hot peppers). And keep the raw peppers / pepper juice away from children and pets.

Check out my growing “Digging It” page for a couple of new things I’ve posted: cat gloves and a cookbook that I’ve read, but never used as a recipe resource. (New “dig its” always at page top.)