And here we are: June 2020. There’s been a lot going on this past spring, hasn’t there?

So… we changed our garden plans we made back in January. As you might know, we did a change up in April and decided to wait a year on planting our small orchard. Instead, we’re going to take the time to prepare the soil for a year. That freed us up to take a very big step: bring home our eight chicks and focus our energies on coop-building, etc.

Now we are at the point where we’re putting in the 2020 vegetable gardens. Again, some change-ups.

We did NOT add a third 20 X 20 garden as planned since we funneled the budget for that to our chickens and coop. This meant we had to be choosier about what and where to plant. If we wanted a variety, we’d have to plant less. If we wanted more of something, there would be less variety. 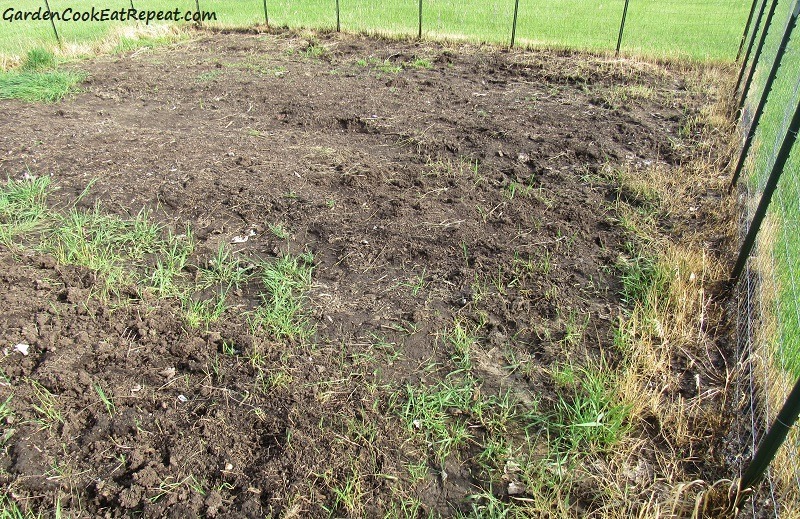 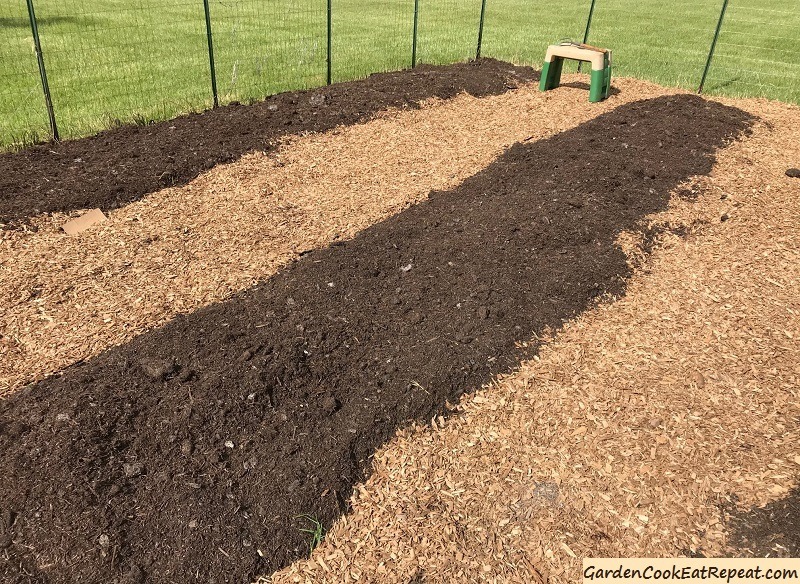 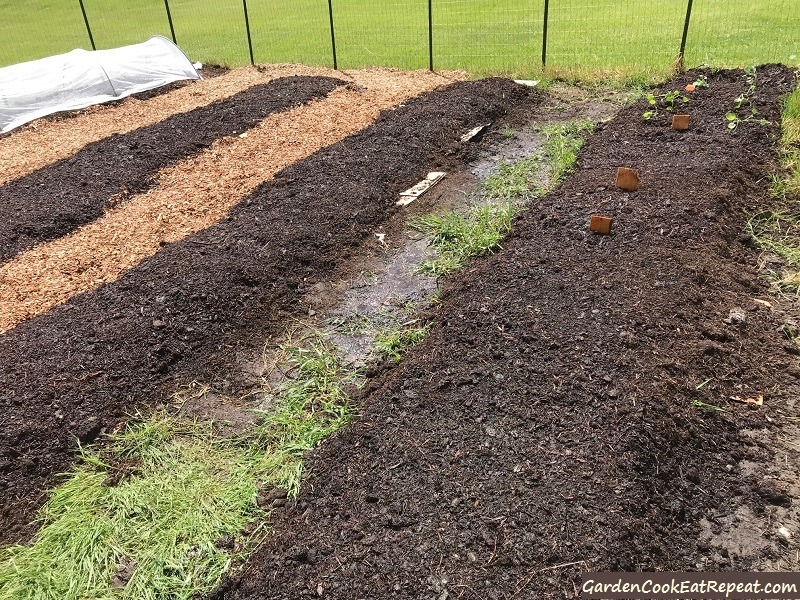 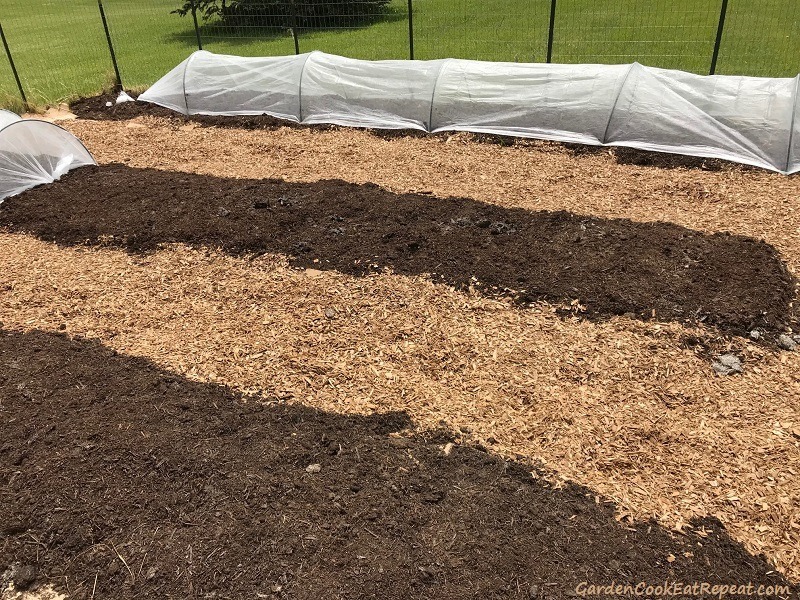 The four photos above and the two below are of the Lower Garden.

As in previous years, after weeding, we added a layer of mushroom compost.

This is always where I struggle: I wish we were able to generate enough compost ourselves. Instead, we buy it from a local resource. This means an additional expense every year. I’m not sure there is a way around that. But, at least we buy less now than we did the first year. I believe we will be able to get away with buying only four yards of compost for 2020. We need compost for four rows in the Lower Garden and two in the Upper Garden. 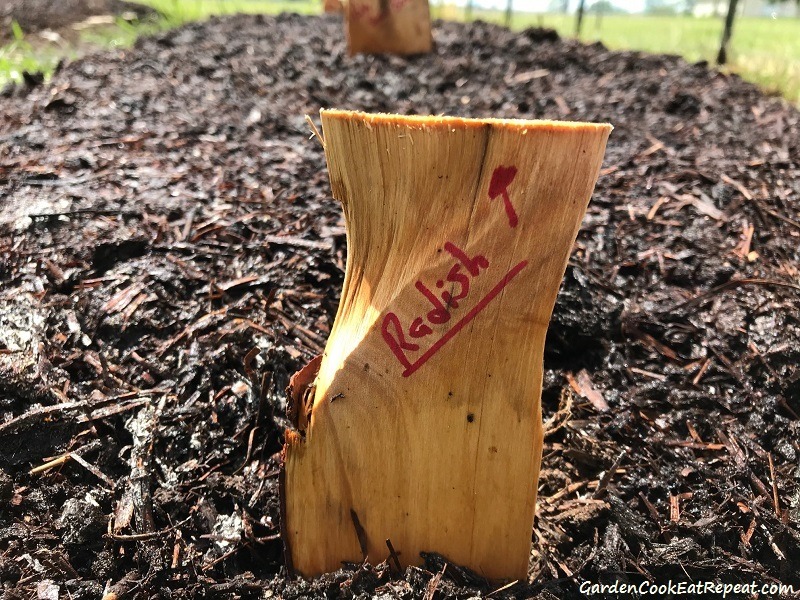 Below is a photo of the Lower Garden.

New this year: playground wood chips. This is wonderful and yes, an expense ($42.00 per yard with tax and not delivered), but how I love it. Makes walking and planting along the rows so much easier. We laid down cardboard over and between the rows to help with weed control. Compost and wood chips then get added on top. 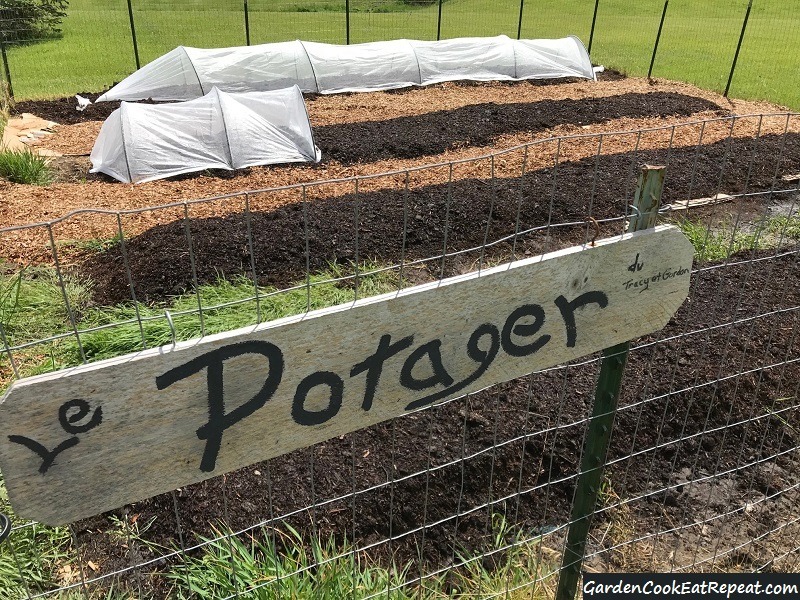 We planted both seedlings and seeds. Our tomato seedlings were definitely small this year. We are protecting them under little, white hoop covers (new this year). We are also protecting them from the birds! Yes, that’s right. The Robins ate a bunch of our seedlings last year. But they are still frail and a peek I took this morning has me worried. I’m not sure how they are going to fare.

Okay, time for some chicken pics to lift your spirits!

I call these: Strut, Ready for My Close-Up, and EXTREME CLOSE-UP! 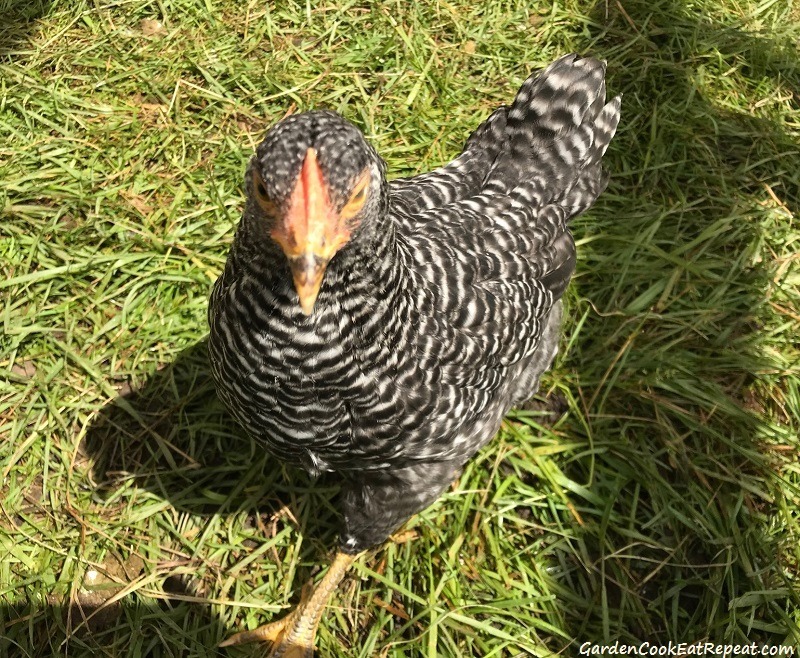 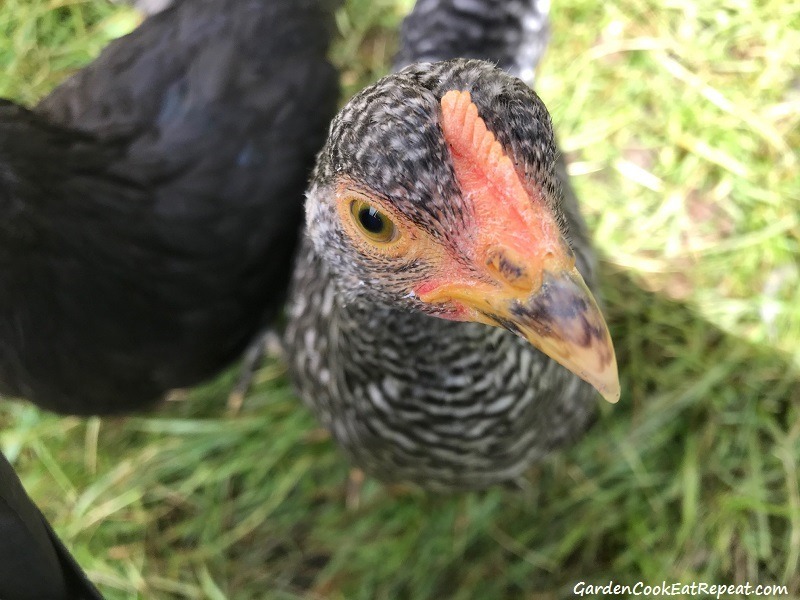 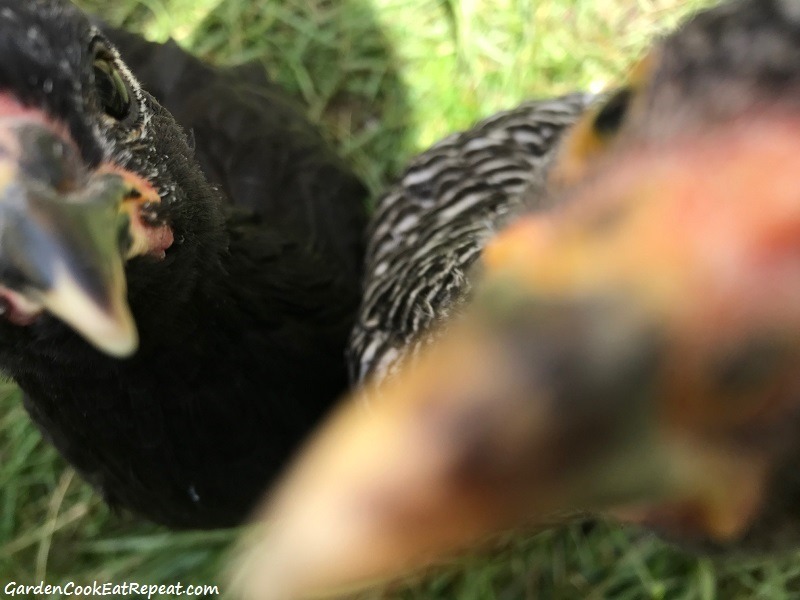 Meanwhile, in the Upper Garden

Mr. Gordon spent a good amount of time weeding out the Upper Garden and freeing the three types of garlic and shallots that we planted last fall. 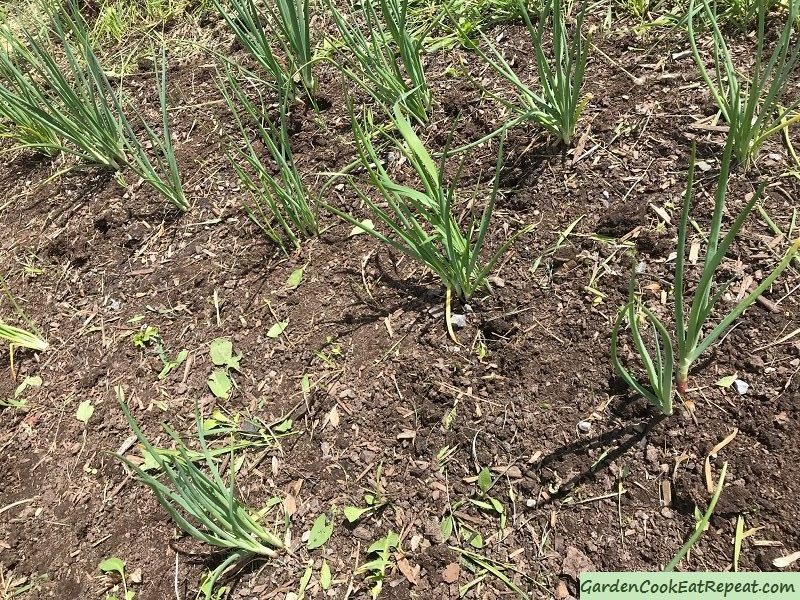 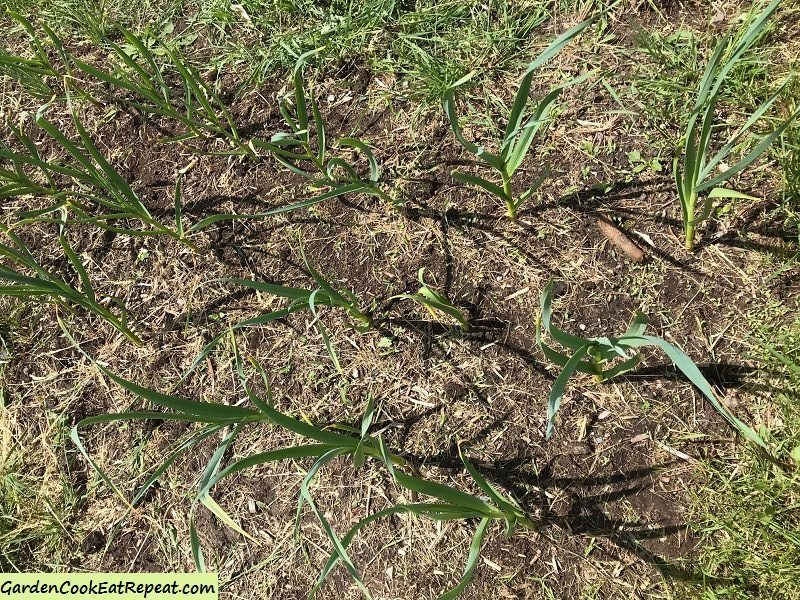 We decided if we want to invest more money in garlic planting, we can absolutely plant garlic cloves closer together. If not, we might be able to use less row space.

We still need to plant some items in the Upper Garden. I’m holding off until we get the weekend delivery of compost (the second half of the compost we’re using this year), but truthfully, even if we had the compost spread out, it’s so cold that I would not want to plant the peppers. When we plant, we’ll be two weeks later than usual.

Planning To Plant in the Upper Garden:

Our theory is by focusing mostly on onion, garlic, leek, and peppers in the “un-fenced in” Upper Garden that the deer won’t be as big of a problem. Yes, the fence around the Lower Garden can be easily jumped by deer, but they haven’t seemed to bother those plants. Let’s hope that continues.

As mentioned, we are planting a little later than planned, but the weather has been extremely unpredictable and cold. I mean, as we were planting the tomato seedlings at the end of May, it started to rain… then HAIL.

What Else Is Going On in the Gardens?

Above the Upper Garden (see pic below), the sheep manure (got a bunch for free from our good neighbor Gerry) has been spread out into two rows. It’s already fairly decomposed, and would be fine if we tilled into a garden, but we practice no-till, lasagna gardening methods.

Instead, we will cover it and let it decompose even further. Then in spring 2021, we will plant our eight fruit trees! 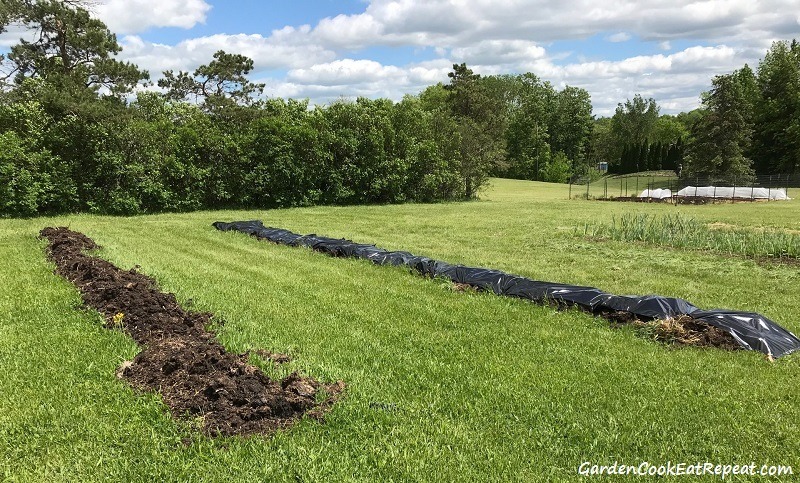 Since we did not add a third 20 X 20 garden this year, we cut five slits in the black covering and planted these robust seedlings:

We’ll see how that goes. It’s an experiment.

Notably missing this year: Double Yield Cucumbers. None, and I tried twice, but none of my seeds sprouted. Well, we may just have to buy a couple of plants from someone and go from there. But right now, it’s not my priority. (Update: We bought 2 “Straight Eight” cucumber plants from Tractor Supply. They are now planted by the fence in the Lower Garden. There. Done.)

There were many other veggies we had hoped to plant this year, but again, we put our energies (and budget) to the chickens and the coop. Next year we can add a third garden and plant even more varieties. (And the fruit trees!)

We still need to install the new watering system. Last year, Mr. Gordon ordered – I think – a drip-irrigation set-up so we don’t have to haul out hoses all of the time. At least not to every garden, anyway. I’ll provide an update when that happens.

We have four pretty Australorps growing like crazy. Meet three of them: Penelope (very sweet), Daisy (she could be the chicken in charge, although a Barred Rock is challenging her), and Zorro… who is really not at all brave. 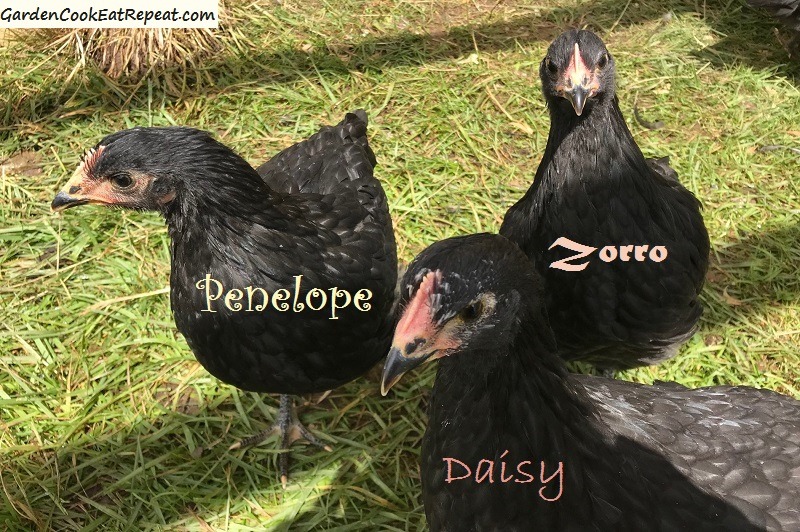 Not only did Gerry give us the sheep manure, he brought over some mulch for around the house. Very kind neighbors we have! And finally, the flowers (Dianthus?) around the pear tree are blooming. They smell lovely. 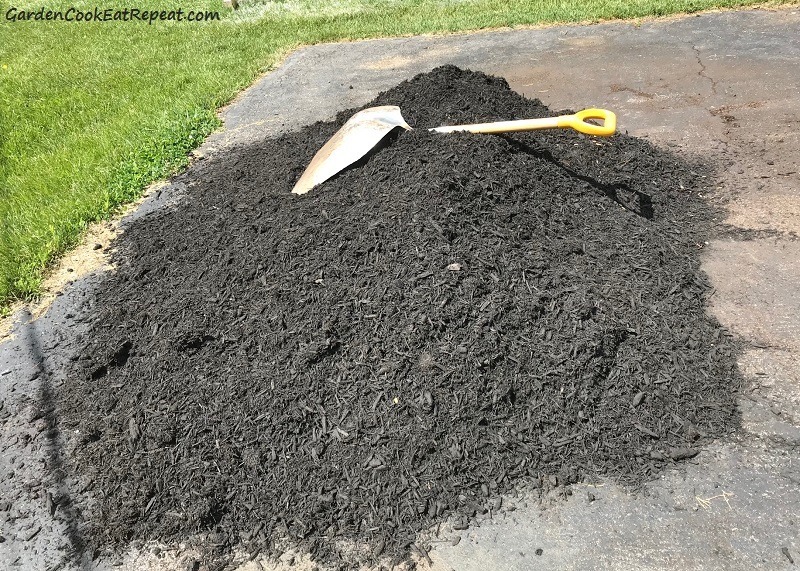 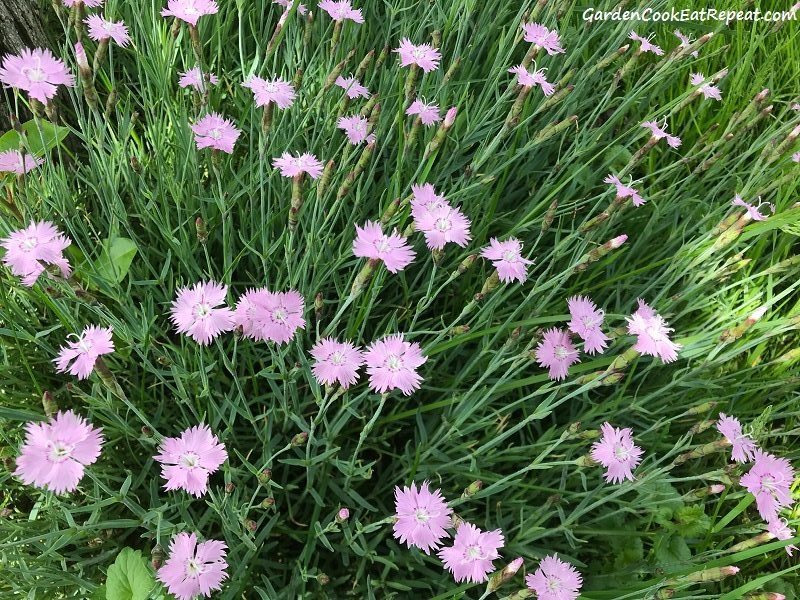 Wait, is she winking at me?

Our four Plymouth Barred Rocks are a laugh-riot. I read in one “expert chicken book” that “they are known for their calm personalities.” HA! Not our chickens. We call them the Rowdy Girls. They are always stirring up some trouble. One jumps side-ways with her feet to the side when she’s getting everyone riled up.

They are harder to tell apart now that they are older. But, I think this is Alice. 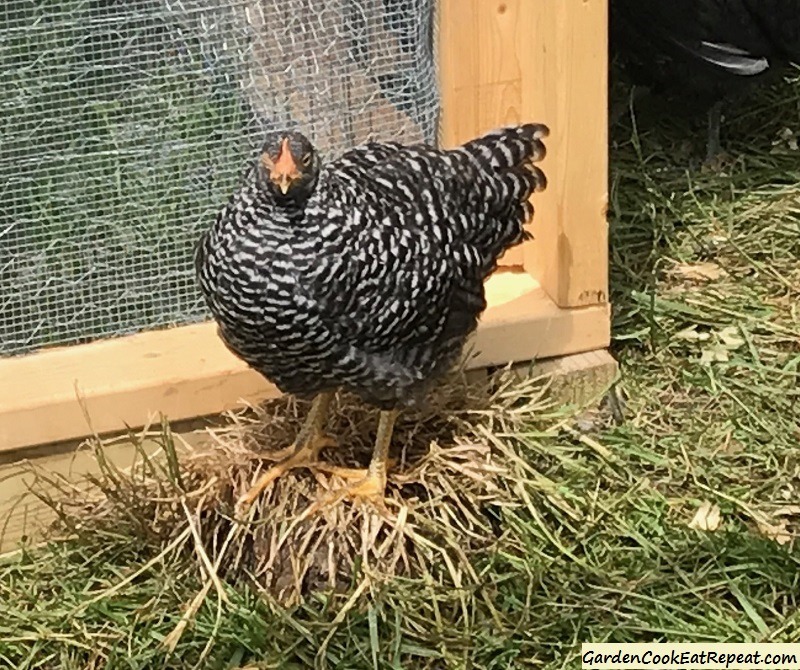 That’s all for now…

I could go on and on, but this is a long post. Please feel welcome to ask questions about our gardening methods.

We’ve learned that you have to remain flexible when planning and gardening. It’s hard, because sometimes circumstances outside your control work against your dreams and plans. In my experience, you have to HAVE a plan and work it, but also be ready to get creative when roadblocks and hurdles appear. That’s what we are doing.

You also need to deal with failure, because it is going to happen often. And when it does, look at each other and say: “we’ll figure it out, we always do.” And then keep moving forward. That’s what we do.

Where are you in your gardening and chickening world? 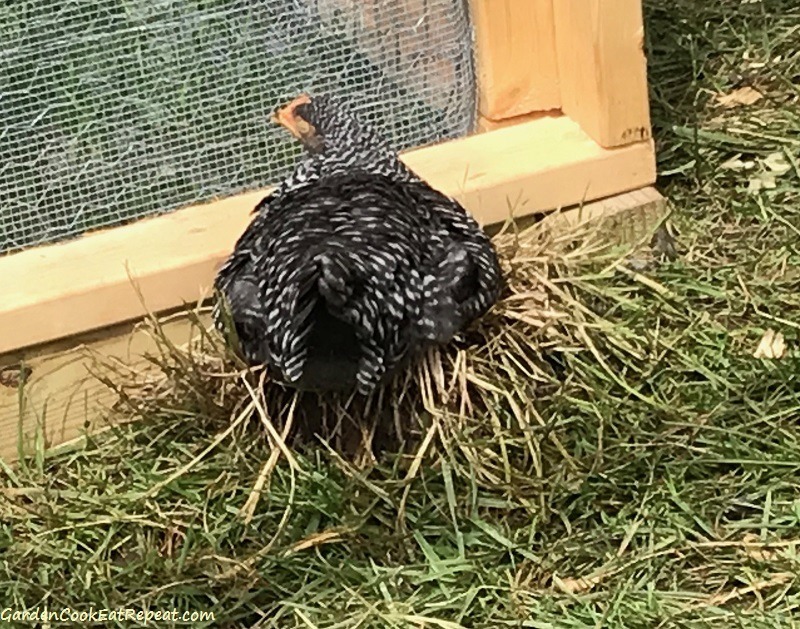