As you know, I have declared this to be the Season of Soup! Sound the trumpets! 😀 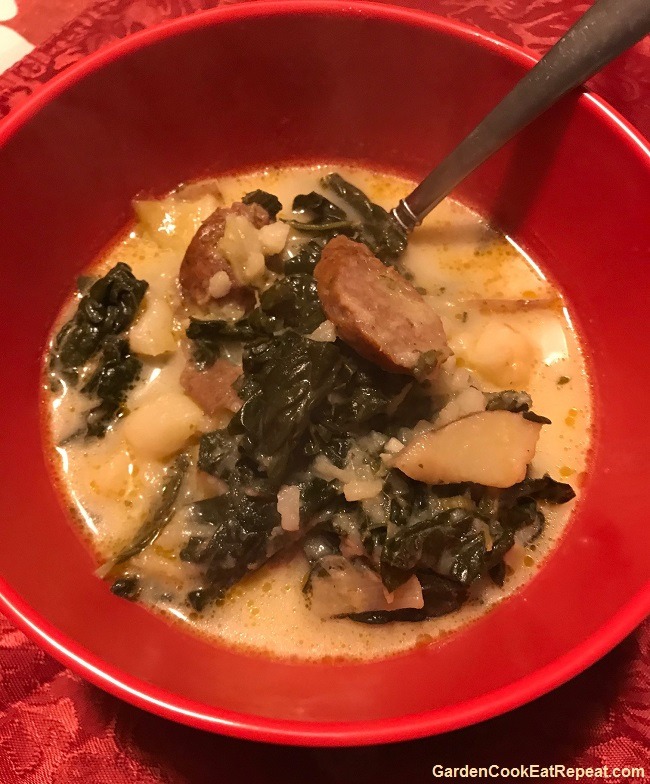 And wouldn’t soup look lovely in some new soup bowls? I love these folk art fox ones!

As the season gets cooler, and with these rainy Autumn days that bring on the chill regardless of temperature, I start thinking about leek and potato soup. This is especially on my mind because the last items still to be harvested from the garden are the American Flag Leeks and the Golden Globe Turnips.

So this past Sunday, it rained in the earlier part of the day. A lot.

I put on my rubber boots. I squished down to the lower garden. You might say it’s a bit wet. 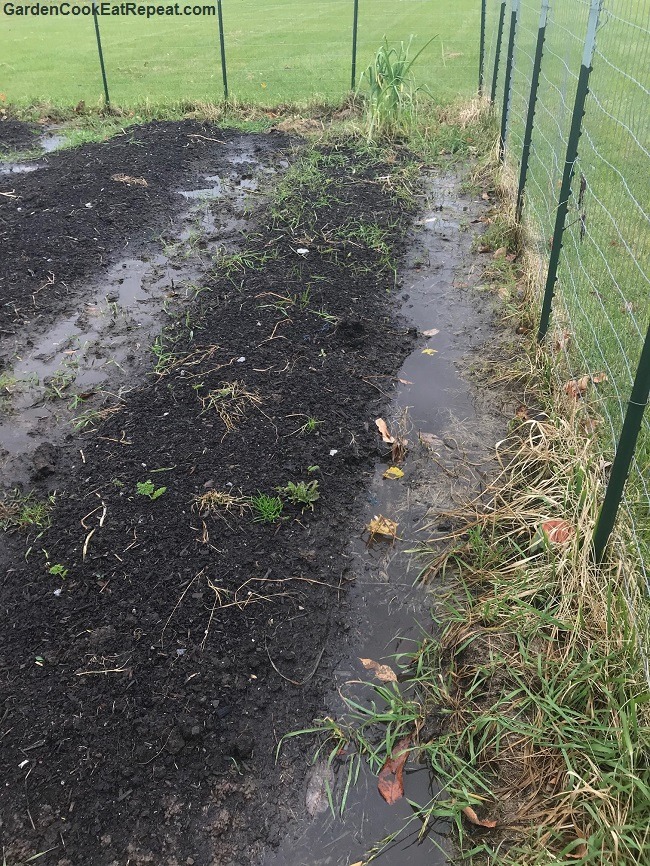 At the end of the first row grows a beautiful bunch of tasty leeks.

Saturated soil sucking at my boots, I slogged my way to the end. 😀 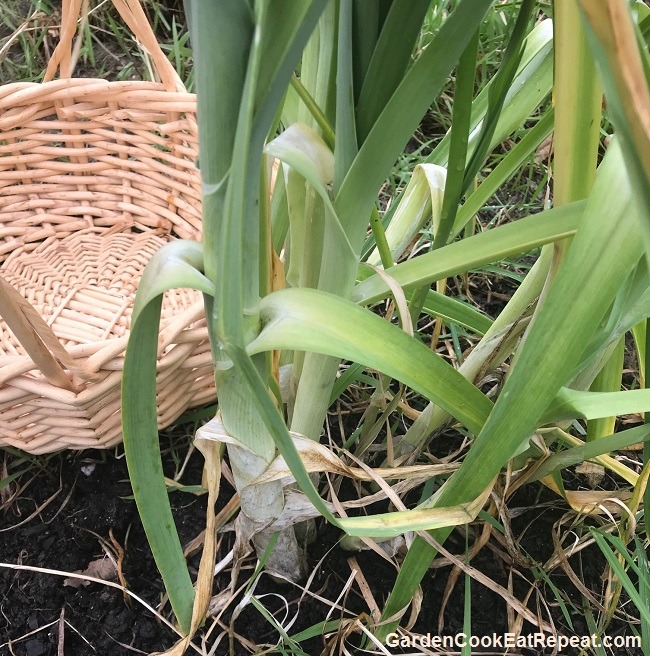 The recipe I planned on using called for four medium leeks.

I picked the four plus one teeny, tiny one that came up as well. Pulling them up was quite the show! The roots were very deep and I kept thinking as I yanked on the green tops: Please don’t let slip and fly backward into the muck!

I left the remaining few for another time. I will have to pick them soon, though. 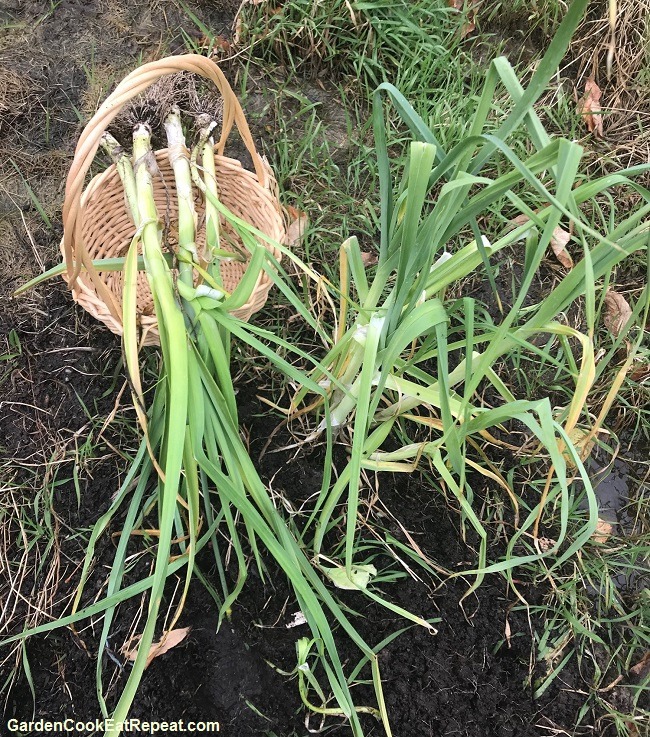 The latest leek and potato soup recipe I decided to test can be found on the Mother Earth News website here: Hearty Sausage and Potato Soup Recipe. Sunday afternoon, I pulled out the Dutch Oven and set out the ingredients.

This is a lovely (lightly) cream-based soup. It is hearty and will warm your bones on a cold fall or winter day. The recipe is from farmer and author Barbara Damrosch. Her husband is organic farmer Eliot Coleman – one of Mr. Gordon’s favorite authors.

I followed the recipe pretty closely with just a few adjustments / recommendations:

Next Up, Feature Ingredients

LOOK at these lovely leeks from our garden! 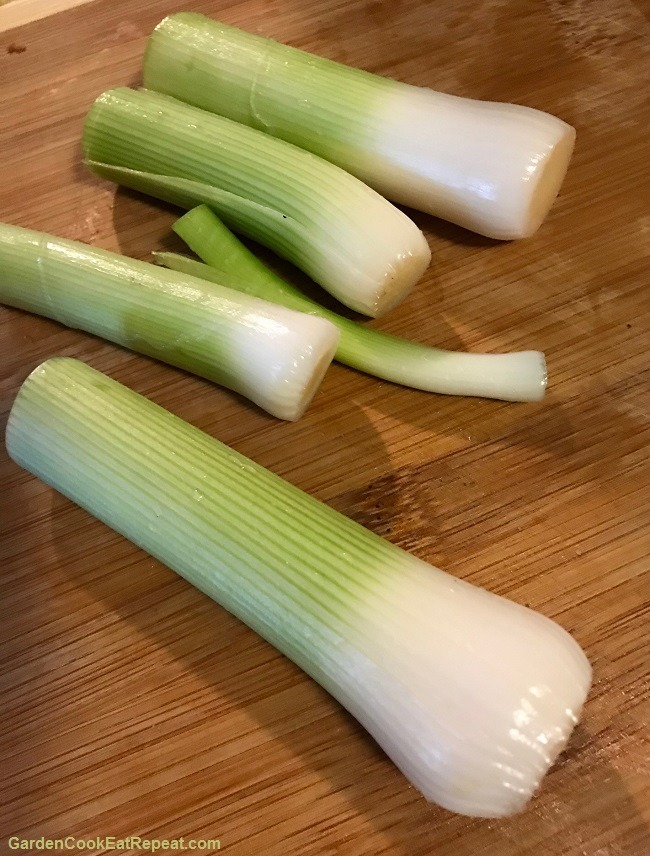 I peeled off just a couple of layers, cut off the dirty roots, and gave a quick rinse.

When it came time to split open, they were so dirt / soil free that I did not have to rinse them again! Simply beautiful! 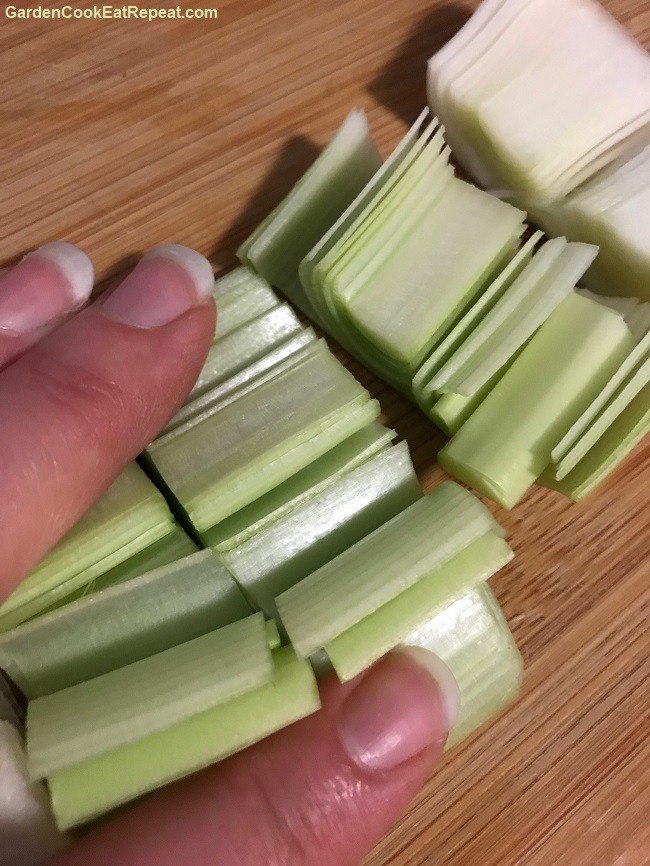 I picked up a pound of kielbasa from the grocery store just for this recipe. I peeled the casing off, but you don’t have to do that. I just decided that for this batch of soup, I wanted it off.

Then, into a cast iron pan with a little bit of olive oil for sauteing. Browned up a bit, but not much. 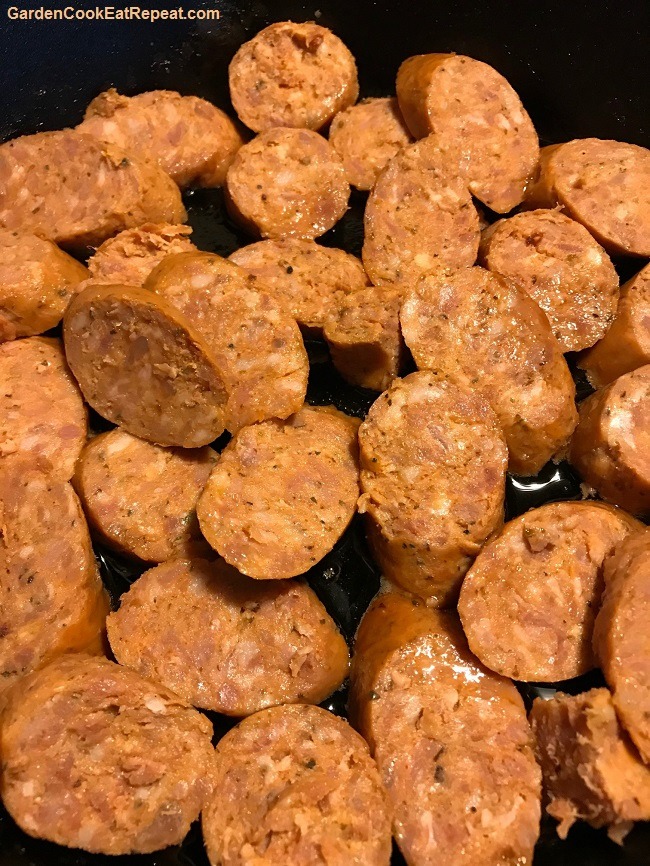 After the kielbasa was browned and moved into the Dutch Oven, into the same pan went the leeks to soften. (You leave the oil / fat from the kielbasa in the pan. No need to drain.)

I probably sauteed the leeks for about 12 minutes. Added a tablespoon of water. The recipe author called for 2 tablespoons at the end to get the brown bits when scraping, but I don’t think you’ll really need that much. I don’t believe it will hurt anything if you do use the extra water, though. 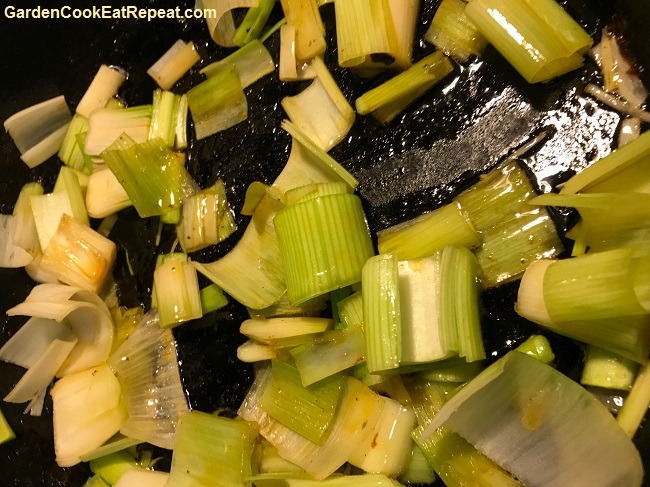 Not only do we have homegrown leeks… Just look at our red potatoes we grew this year! (Variety: Dark Red Norland.)

We’ve been keeping the 65-75 pounds of potatoes we harvested in the humid side of the basement. They are storing well. 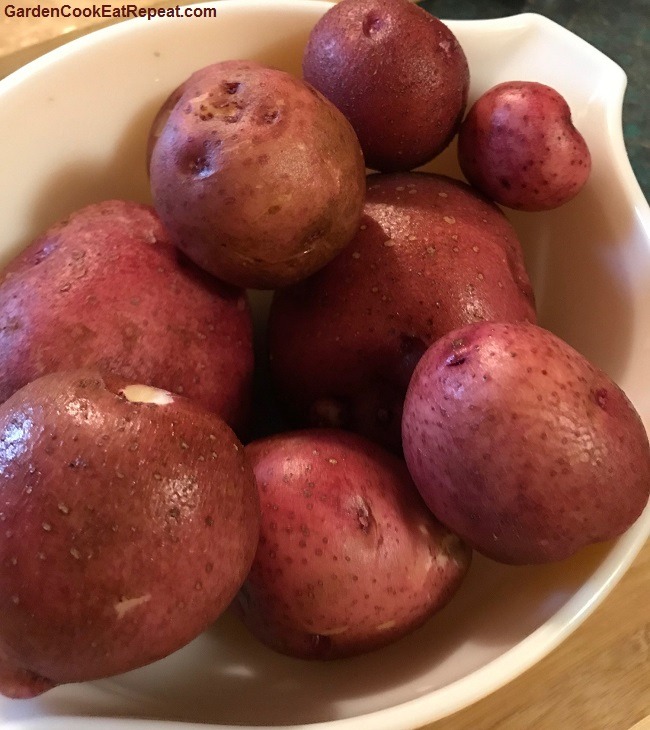 Look at how white they are on the inside!

Homegrown potatoes really do seem to taste different from store-bought ones. If you can, try to grow a variety or two in your garden. Totally worth it and relative easy to do! 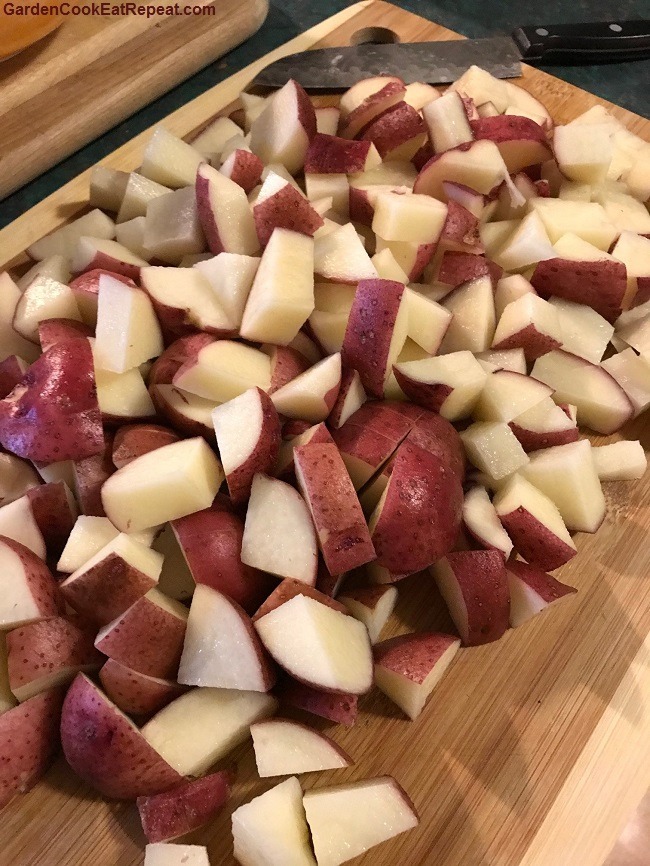 We bought the locally-grown organic Lacinato Kale from the grocery store. I like when our grocery store supports our local farmers by purchasing and offering their produce and meat to customers.

I’m not a big fan of kale, per se, but cooked down in a soup is fine. And kale just seems to go with sausage / kielbasa. 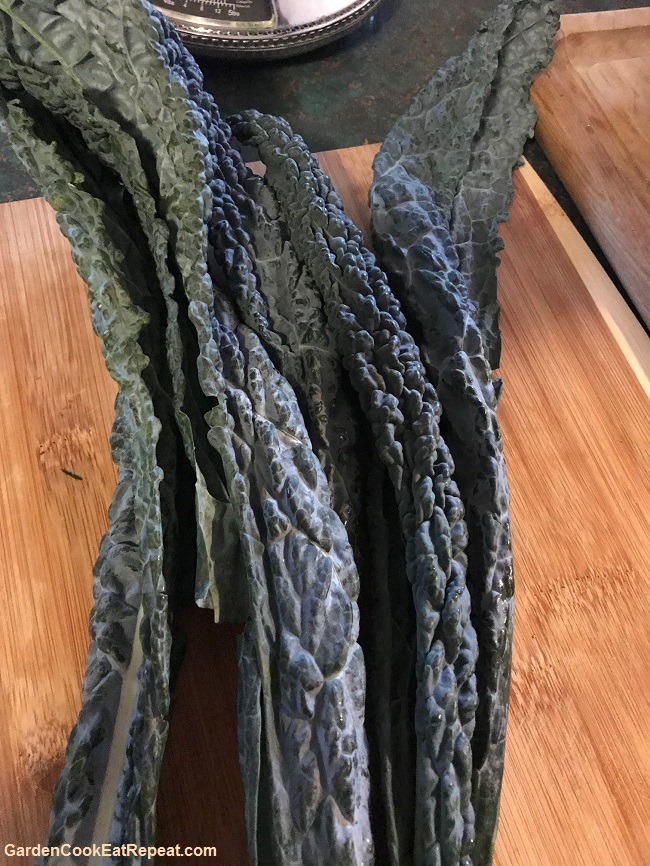 Peel the leaves from the stem (stems can go in the compost) and chop up. Kale then can go into the pot on top of the browned kielbasa and sauteed leeks.

It will all cook down. 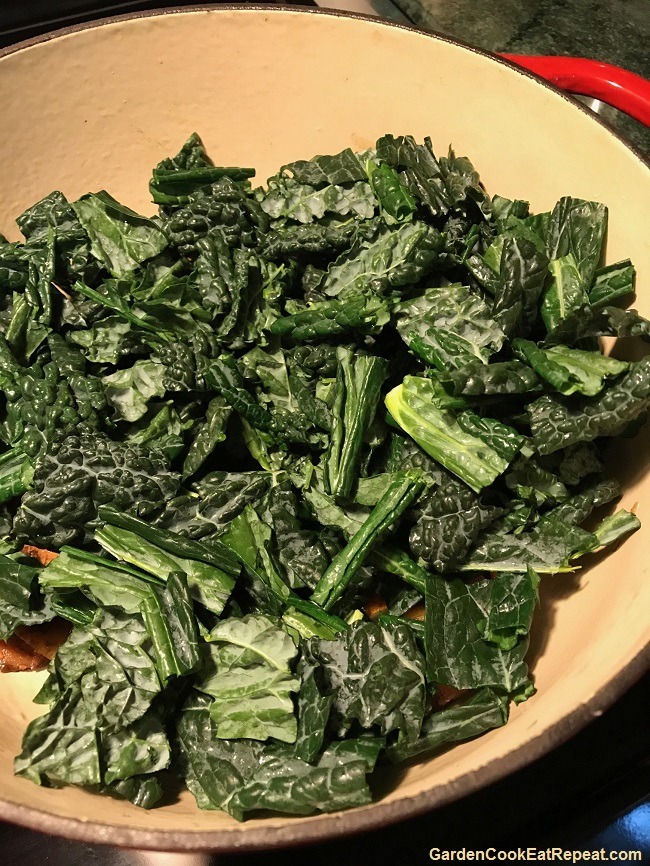 Yes, that is garlic from our garden and lovely, delicate thyme from my herb plant on the window sill. 🙂 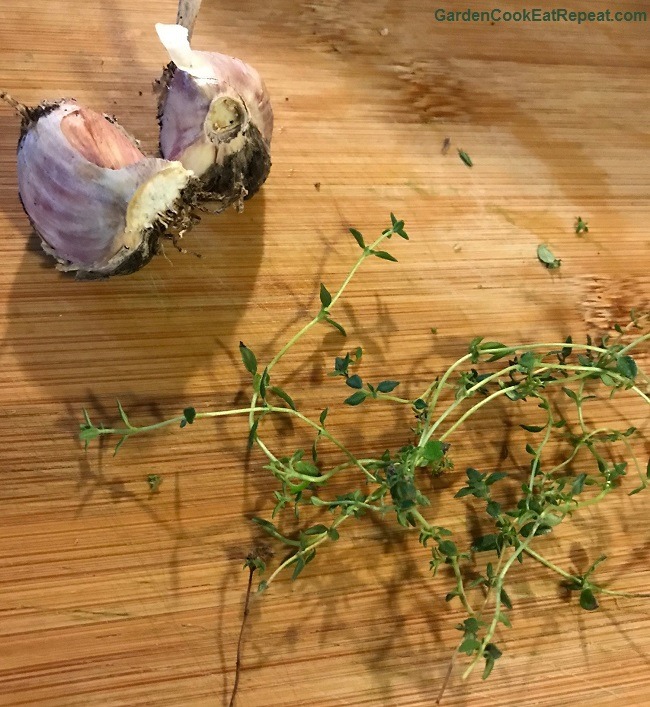 Chopped up with some fresh sage from the grocery store.

I do plan to plant a sage plant next year. I need to find a permanent spot for it. I had a beautiful one in my back yard when we lived in the city. 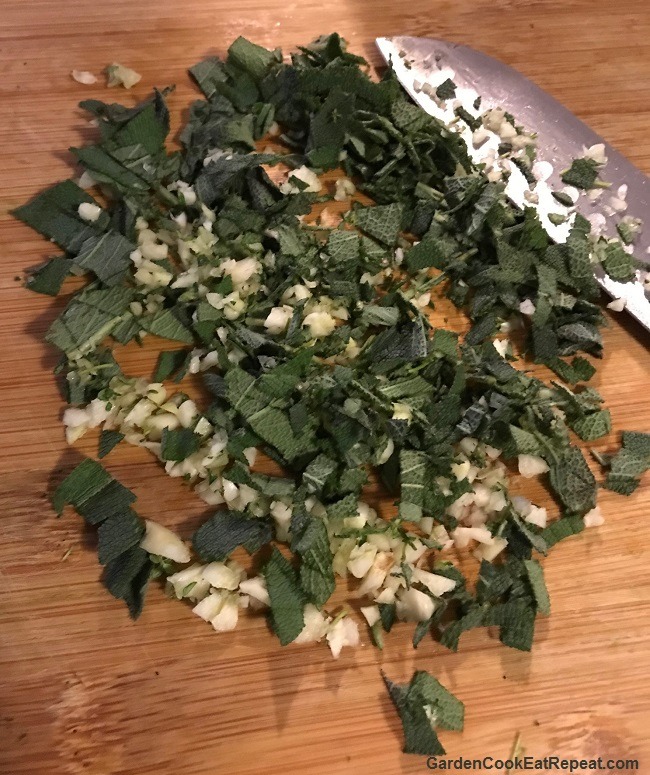 Everything into the pot to simmer!

Here is where I added the 4 cups of water, even though the recipe called for 3. I think either is fine. I brought to a quick boil, then lowered to simmer for the recommended 30 minutes. Salt and pepper added now, of course. 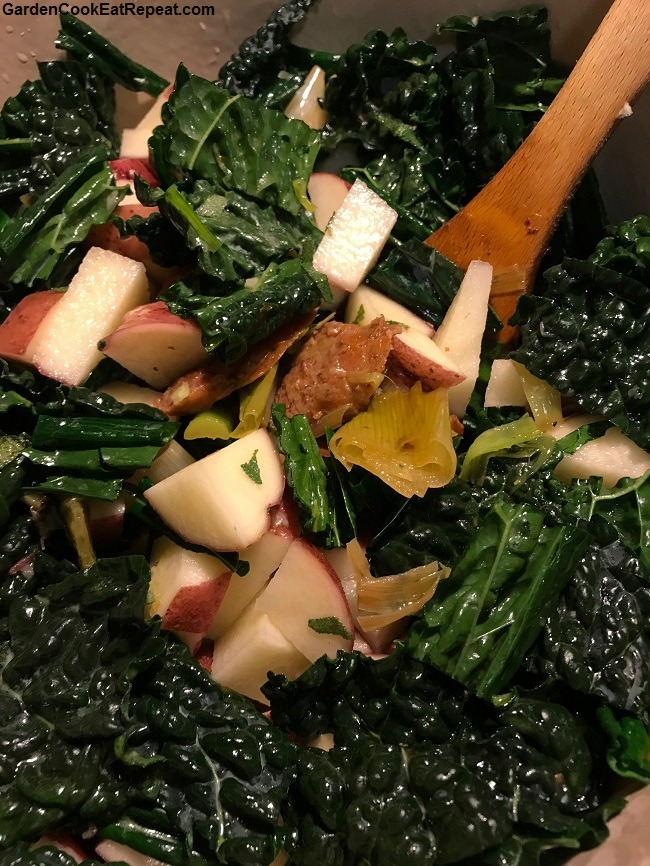 I decided to follow the recipe and only put in a half cup of heavy cream. I was tempted to put in a full cup, but did not. I’m glad – the half cup was the right amount. And see how nicely everything cooked down? 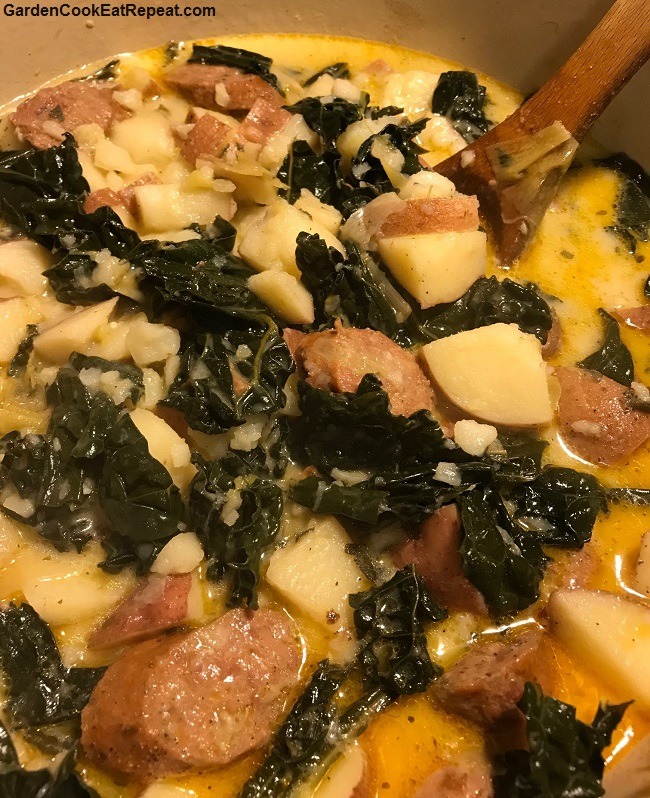 Did I mention that Mr. Gordon also baked tasty perfect-for-soup homemade bread? Yes, he did!

When he learned I was planning on cooking up some soup, he baked this hearty, chewy boule. I think he might put up a post about it. He baked it in the Dutch Oven before I made the soup. 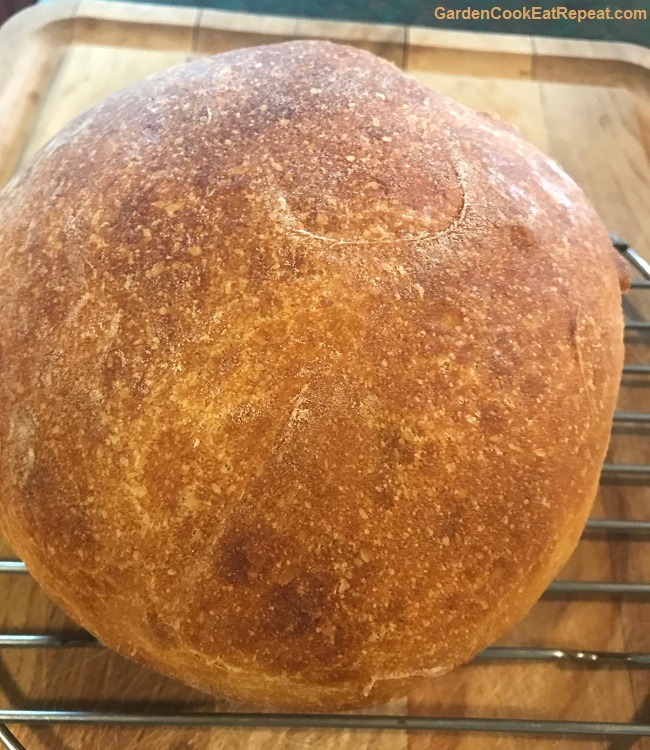 …And it was awesome.

The bread AND the soup! 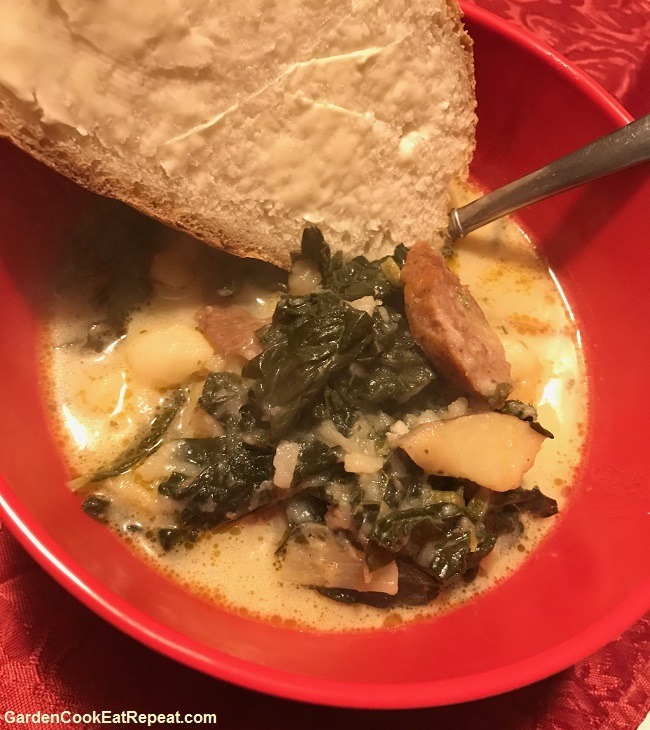 So there you have it!

This soup was so satisfying! The flavor of the kielbasa is key, but the notes of the leeks came through. And the garlic (lightly). And the herbs… 🙂 The red potatoes are also perfect for this soup because they are “creamer potatoes” and add a nice consistency.

So, if you are wanting to try an awesome new fall-ish soup recipe with cream – although not a thick cream soup – give this Kielbasa, Potato, Leek, and Kale Soup recipe a try! The full recipe details are here at Mother Earth News, so check it out!

And let me know if you do make it. I’d love to learn what you think of it!