‘Tis the Season… for Football, Buffalo Wings, and Halloween!

Alright, this post was originally going to be short and swe… SPICY. 😀 I was going to focus on making homemade Buffalo Chicken Wings and leave it as that, but an impromptu drive to Mr. Gordon’s cousin’s house where he has built a Halloween SPECTACULAR display around his house produced a lot of fun photos to share. Those photos to follow below, but let’s start with the Buffalo Wings.

I have a confession: I am at that point in my life where I have started to lament the cost of things today as compared to… back in my day. I am, *clears throat* 46  years of age, and I am appalled at the price of some things. I’m willing to agree that some higher prices make good sense – such as the cost of eggs when I was buying them at age 20 (say, 49 cents a dozen CAFO produced) versus the $4.00 I pay for a dozen of organic eggs at the store or $3.00 – $4.00 from a local person raising chickens.

BUT, there are some prices that have gone up and I just can’t abide it. One food in particular: Buffalo Chicken Wings.

I grew up in Western NY. I have had some of the best chicken wings ever made. As time has passed and I moved into the Finger Lakes region, I have sought out pizza shops and pubs that produce the Buffalo Chicken Wings of my younger years. Some have been close, most have not. Still, I have enjoyed a good wing along the way. But I digress.

However, the cost of ordering 10-12 wings (why some places now sell by the 10s I’ll never know) finally pushed me to the edge. On average, when I order wings, it’s close to a $1.00 per wing. They vary in size, of course, and some are fairly big – which, I don’t believe is absolutely necessary.

Recently we ordered a medium pizza and 10 mediocre wings one Friday night (for two, knowing that we would have some pizza leftovers) and the cost was just over $29.00. I threw my hands up. I went online.

So I found this recipe from The Kitchn: How To Make Buffalo Chicken Wings in the Oven 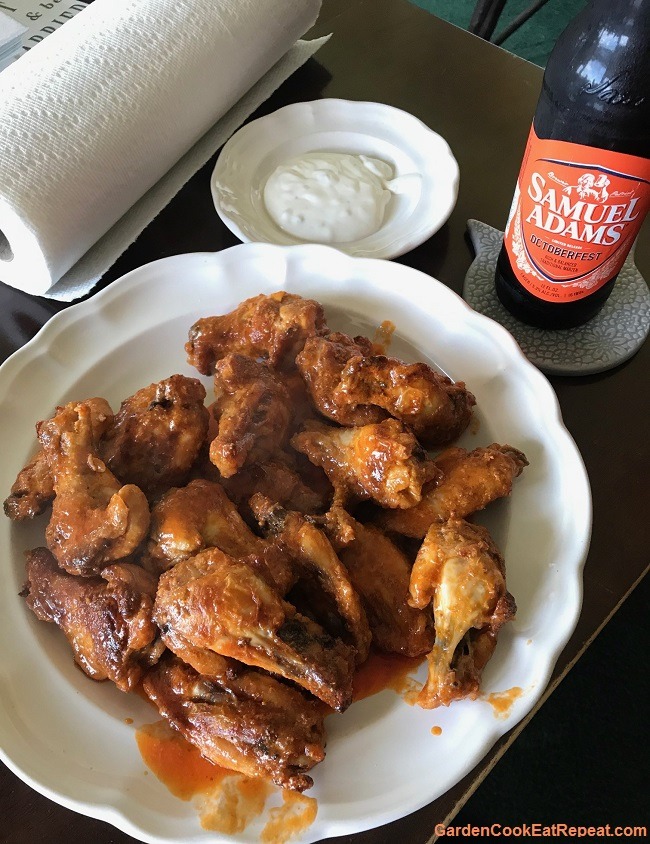 I have made the recipe twice now and I think it’s pretty good, so I am sharing it here. Some notes / changes I recommend: 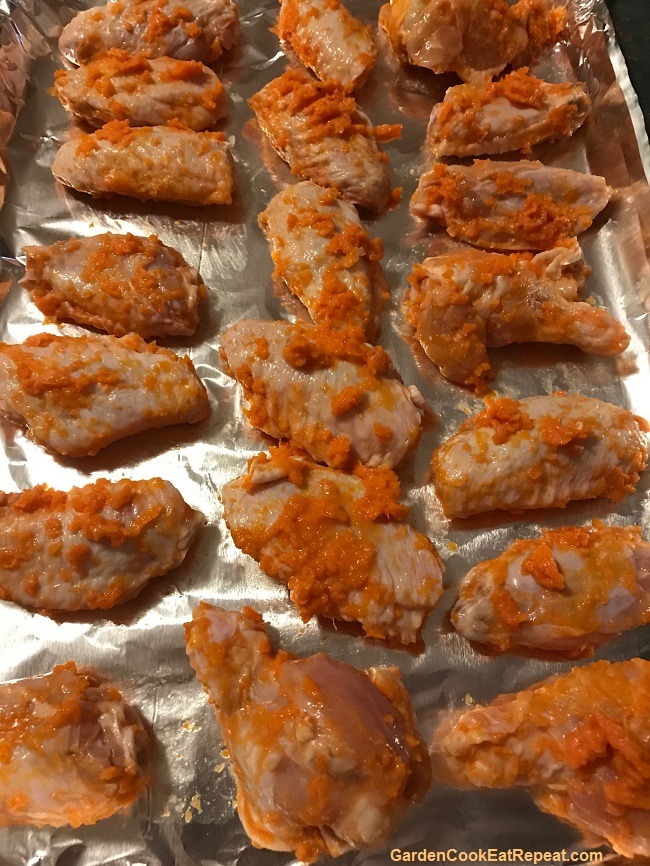 The recipe directs you to toss the wings in half the sauce, then broil on one side, then flip and broil again, then toss with remaining sauce and serve. I happen to like a crispier wing versus sticky, so I recommend:

Serve with chunky blue cheese on the side! (My favorite blue cheese dressing is Ken’s Chunky Blue Cheese.)

This recipe is pretty dang good. While it’s not the “wings of my youth” recipe, it’s good. PLUS, I get to buy organic chicken wings at $4.69 per pound. This pack will probably have around 20 wings/drumsticks in it. I paid $7.46. That’s around 37 cents per wing. 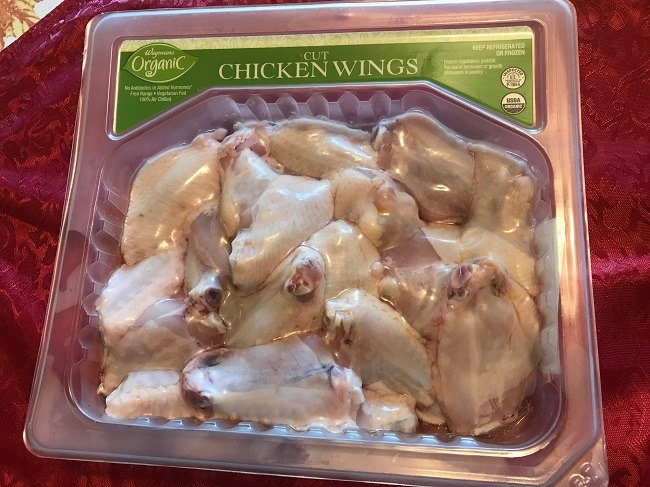 Yes, there is the cost of the hot sauce and butter, but a bottle of hot sauce covers about 60-90 wings (rough estimate) and the butter is minimal. The blue cheese dressing I always have on hand. (We never eat the cheap blue cheese that comes with the wings when we order takeout.)

At the end of the day, it’s not like I am saving huge amounts of money, but it’s the principal of it. (A dollar per wing, for Pete’s sake…) And while Mr. Gordon makes fun of me when I get on my “can you believe how much that is?” kicks…

…he still eats the Buffalo Wings I cook up! 😉

So, if you like Buffalo Wings, check out this recipe from The Kitchn, cut the salt in half, always use Frank’s Original Red Hot Sauce (affiliate link), and enjoy with someone you love. Preferably with Sam Adams Octoberfest beer. During football. 😉

Well, I guess that post was NOT as short as I had planned!

And, I’m not done. Check out this massive Halloween “home display” that Mr. Gordon’s cousin Karl has built. He’s been building and adding to this display for maybe 4 years now. I think this year he added the corn maze. I took a lot of photos, but here are the top 14 from yesterday’s walk. Enjoy!

Here’s a panoramic view photo I took of Karl’s side yard showing an epic skeleton army attacking tree monsters and the house. This is absolutely incredible. 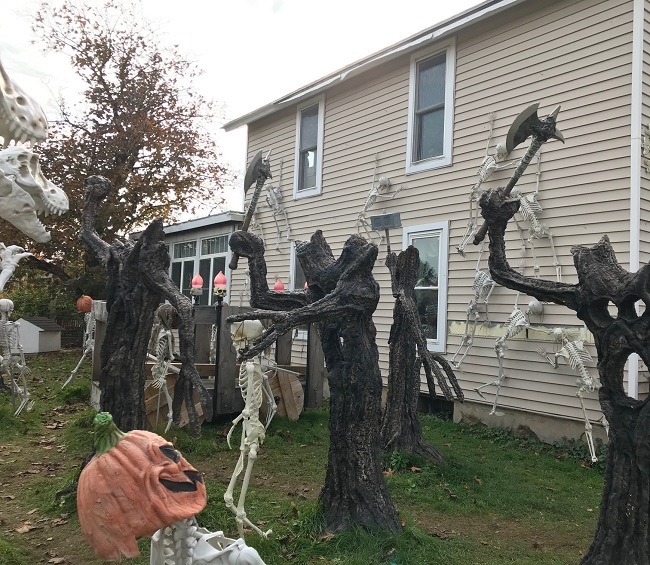 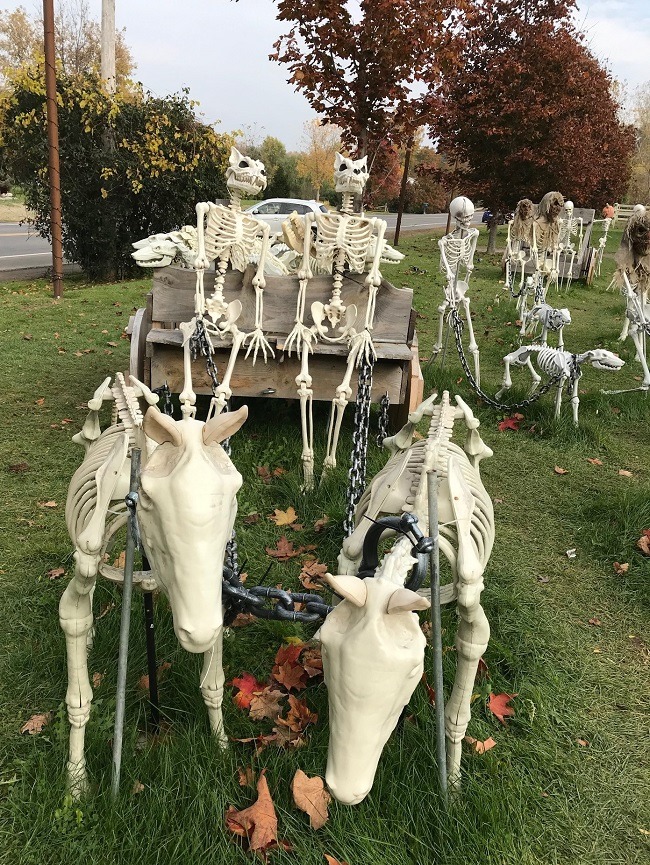 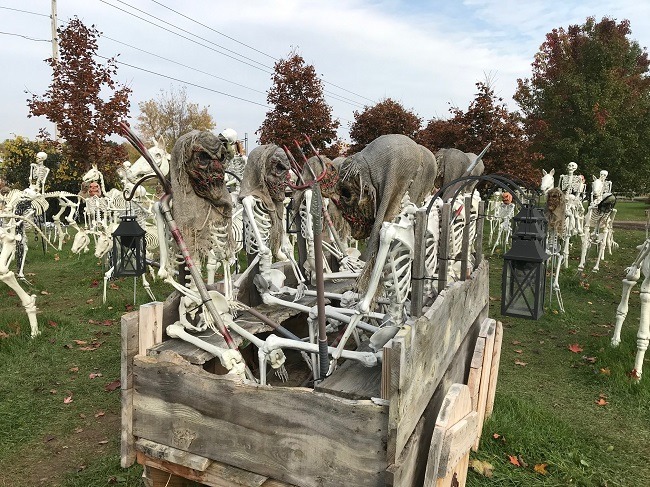 Okay, this Boat of Bones is pretty freaking awesome! 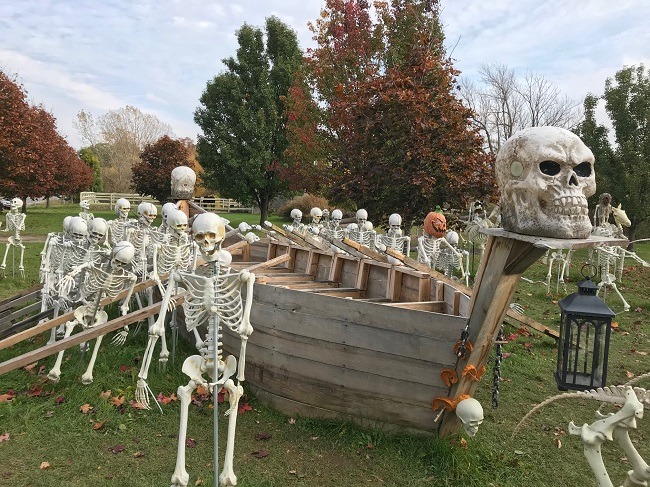 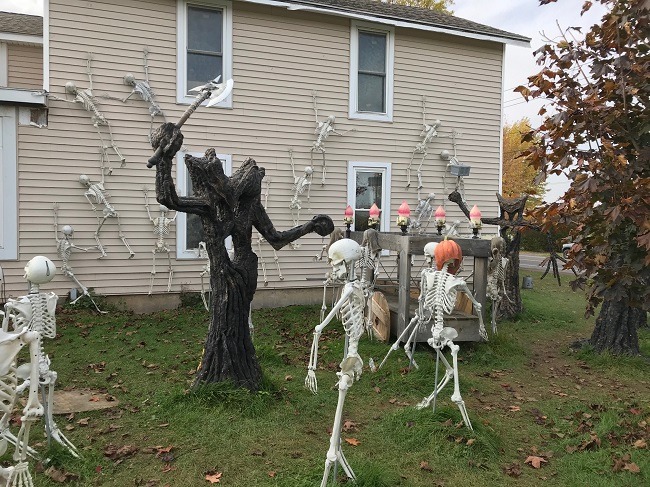 Scary displays built and placed throughout the property. Some move, have music, etc. Some were horror/gore themed, some more traditional, like this witch one. 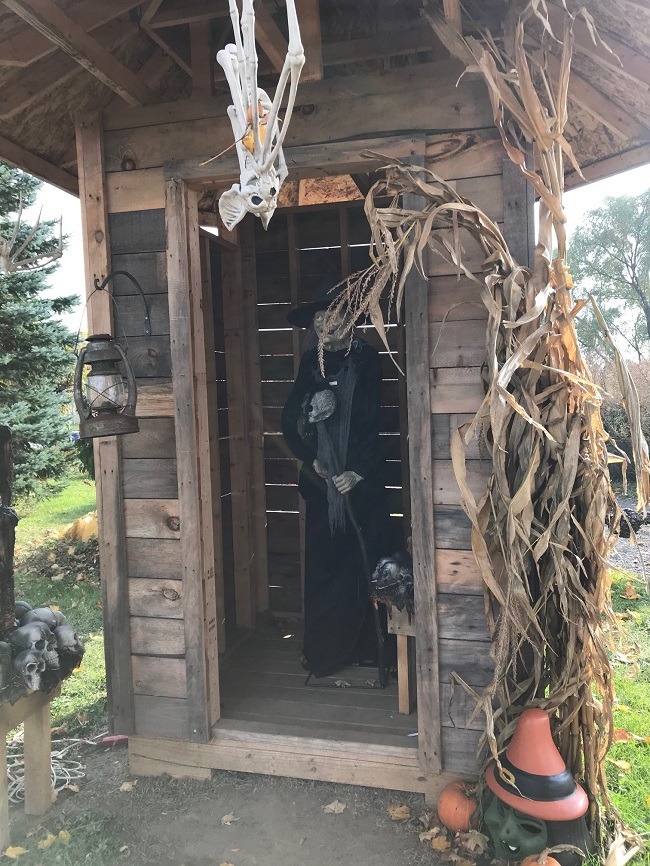 Welcome to the Cemetery! 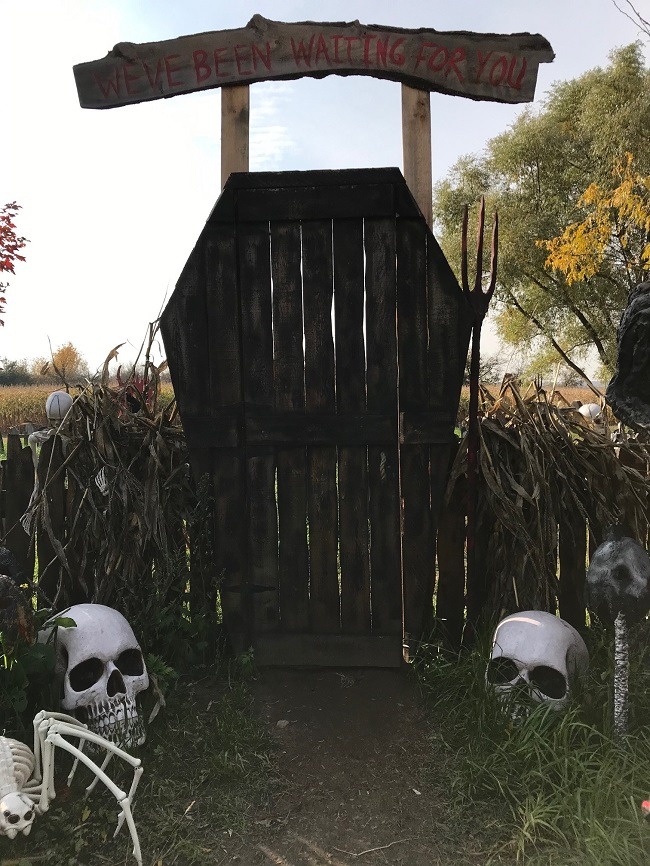 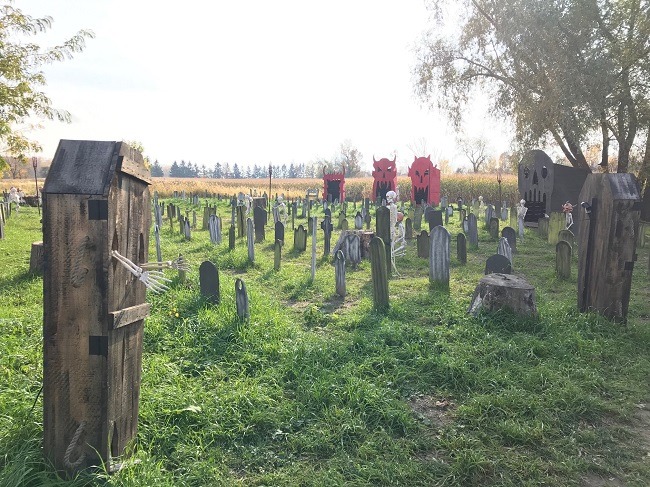 No, Mr. Gordon, you go first! (I hear at night Gordon’s cousin has friends roaming the corn maze and scaring people. No thank you, daytime visit is fine for me! LOL!) 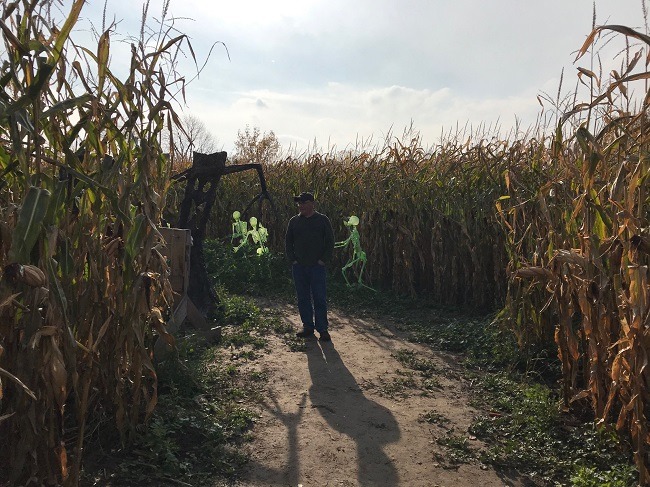 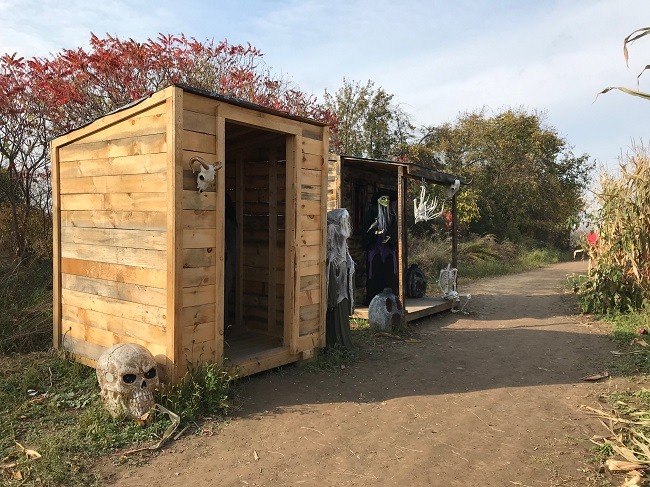 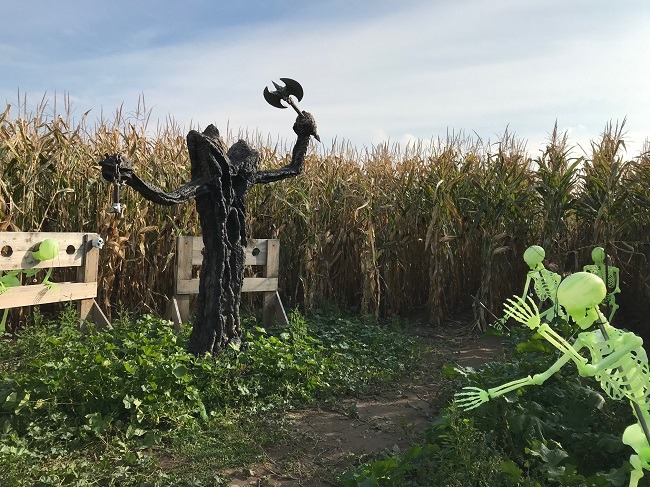 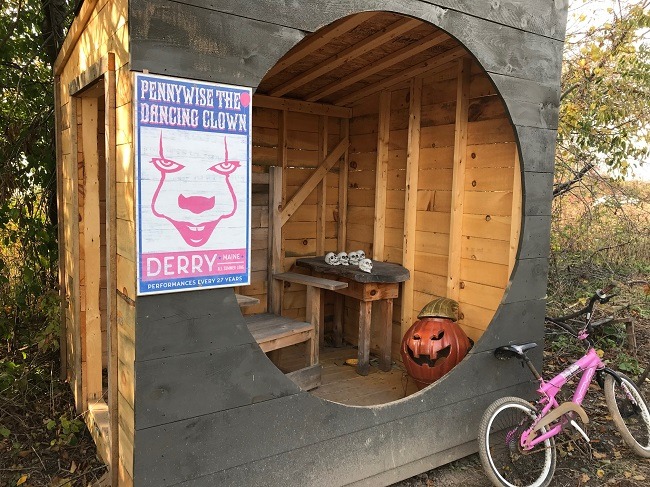 Even the Dead Must Dine. 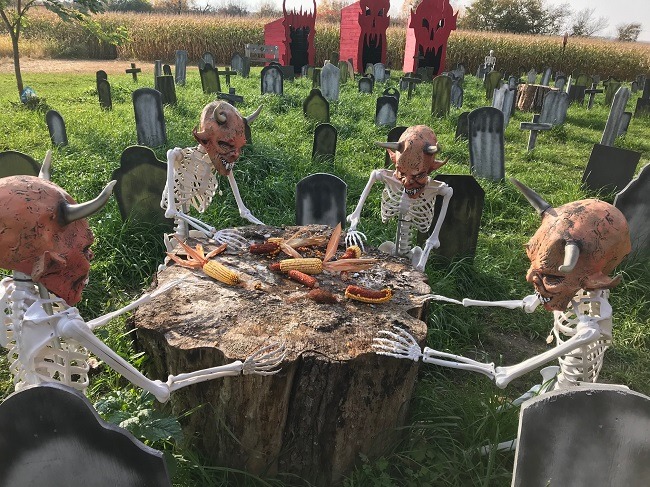 Like I wrote above, I just put up a few photos here. There are a lot of other displays, too. The skeleton army attacking the tree monsters and house (that first photo above) is so impressive, though. Karl built a catapult and other great scenes within that whole battle. If you are in the Finger Lakes region, make the trip up to Karl’s Housel’s House of Horrors at 4017 County Road 4, Canandaigua, NY 14424. But hurry, the display won’t be up for much longer!

You can also read more of Karl’s “why and what” story here: https://www.fltimes.com/lifestyle/from-near-and-far-they-flock-to-housel-s-house/article_eb5250bb-de32-5d09-b701-7c951aa87fba.html

So… Happy Halloween and BOO! 😀