We’re pretty sure it did, anyway.

Several weeks ago we got slammed with a horrible thunderstorm. The rain was torrential, the wind fierce. It hit in the afternoon while I was working. I work from home out of an office in the back of my house.

The minute I saw the rain coming down sideways, I threw a windbreaker (why did I bother?) over my head (it blew off) and ran out to close the side windows on the coop (I got soaked to the bone). I was dripping wet and had to change all of my clothes when I returned. The wind whipped outside and I felt sorry for our chickens. I hoped they’d be smart enough to go in the coop. I had to go back to work.

My husband also works from home now due to Covid-19. He finished up before me that day and was in the kitchen. The storm had finally stopped, the sun was out – the air hot and humid. As I closed up my laptop for the day and stepped out of my office, he met me in the hall and said:

Now, I am going to tell you something, but I don’t think we should interfere.

My first thought: oh my God, the chickens! But that was not it. Mr. Gordon led me to the kitchen window. He pointed to three soggy brown lumps in the yard underneath the flowering pear tree.

The Robins and their empty nest lay on the ground. The wind had blown everything from the tree, and three not-quite-ready-to-leave-the-nest little birds were stranded in the yard. They were drenched, and now the early evening sun beat down upon them.

The Mama bird knows they’re there, Mr. Gordon told me. I’ve seen her feed them. I don’t think we should interfere.

They won’t survive the night, I said back.

I went outside and carefully walked over to the babies and took a peek. (No, I didn’t take pictures. This was too serious to stop for photos.) I tried not to get too close. The Robins were still small, but not without a fair amount of feathers. The nest was somewhat intact, but truthfully I couldn’t imagine successfully getting it back into the tree – and then getting the birds back into the nest. Even if by a miracle we got the nest and the birds back in the tree, I had a feeling they all would just fall back out.

Whenever I feel helpless or like the problem is too big, I tell my brain: you can figure this out. You’re smart. We’ll figure this out. I started to circle the tree, looking at the lower branches. I had a sturdy wicker basket (actually, it’s Mr . Gordon’s basket) and if we could get the birds in the basket, we could hang the basket from the tree somehow. Yes, that’s what we could do! I would convince Mr. Gordon to help me – because I was doing it with or without him.

I went back in the house ready to announce my plan.

Mr. Gordon was ahead of me at that point. He went on YouTube and found a video of a man rescuing baby birds who were in a similar predicament as ours. That man used an empty hanging basket – you know, the kind flowers come in. He filled it with grass and hung it back in the tree.

We have one old hanging basket, I said. Let me get it.

Well, it had some gaping holes, but we patched them up with duct tape on the inside and outside. There were water holes in the bottom and a tray over the holes which we left in. If it rained again, the basket would need to be able to drain out any water. Next we put in clean pine shavings from our chickens’ litter stash, followed by a lot of green grass and cushy clover.

Mr. Gordon brought out a ladder and placed it underneath the tree. We wanted to get the basket as close to where the nest was located before it blew to the ground. He found a sturdy limb and attached the hanging basket to the tree with a massive amount of duct tape. Now we had our “hanging home” for the nest and the birds. 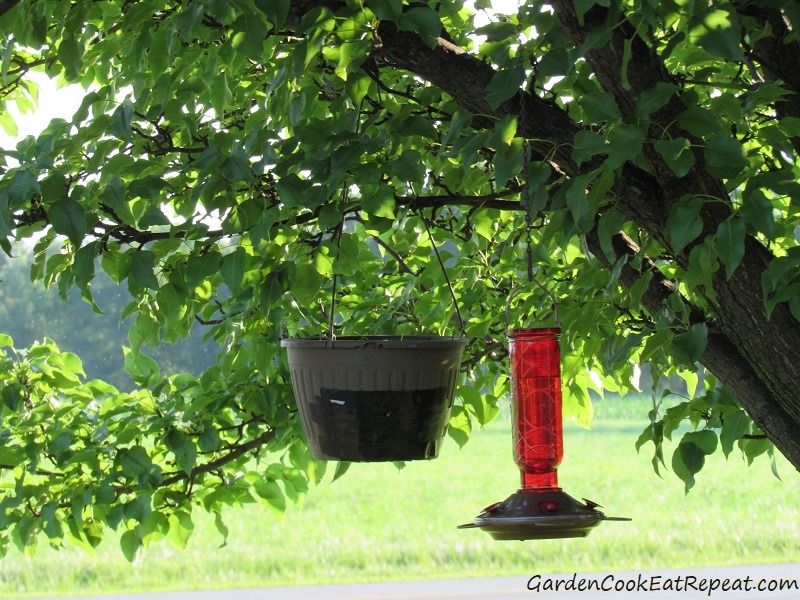 Next, the nest went in. Mr. Gordon donned his leather work gloves and gently nestled it down into the grass and clover. Now, for the baby birds. He carefully scooped up the first one. I held the ladder still while he climbed the ladder with just his feet – both hands cupped bird number one.

Bird number two – this rambunctious babe starting wailing the minute he picked it up and kept yelling as he got it to the nest… right before the baby bird jumped back out of the nest and tumbled into the ring of Dianthus that surrounds the tree. It stretched out not a quite fully feathered wing. Back down the ladder came Mr. Gordon. Bird number two scooped up a second time, a lot of bird yelling, and then back into the nest. Bird three went in right after that, also complaining loudly.

Holy moly, all three babies in. 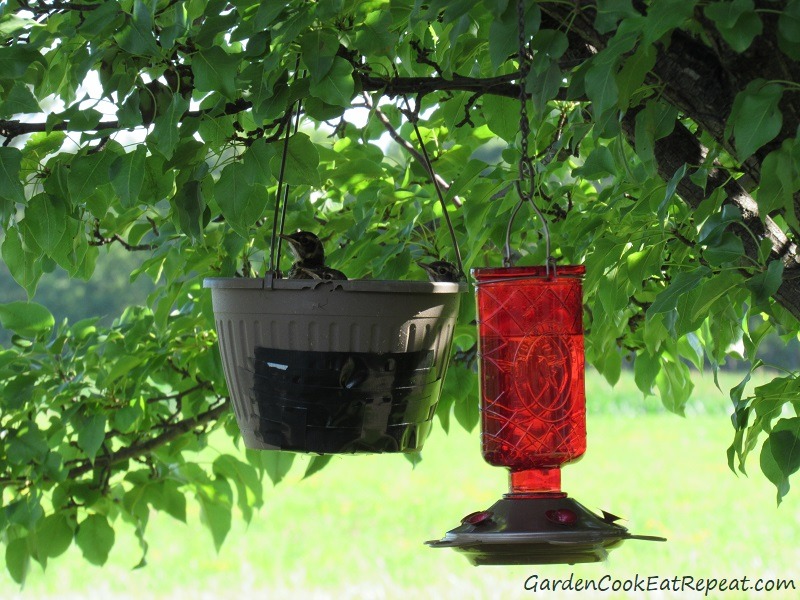 We skedaddled out of there.

Mama bird, where are you? I scanned the yard from my kitchen window.

She came back, skirting the driveway, running around the yard with a worm in her mouth. You could see that she was looking. Where did the babies go? Look up Mama! They are not in the yard anymore! They’re in the tree! Can’t you hear them? (We could hear them.) She ran in the opposite direction.

Papa bird came by. He even flew into the tree. Three babies cried with mouths open. He hopped from branch-to-branch. He looked. He left.

We gave them a fighting chance, Mr. Gordon said to me.

What if she abandons them? I worried. What if she doesn’t come back? What will we do?

But then… then… Mama bird came back yet again and hopped through the branches. She got closer… closer to the basket… she perched on the edge. The babies begged with mouths wide and crying. 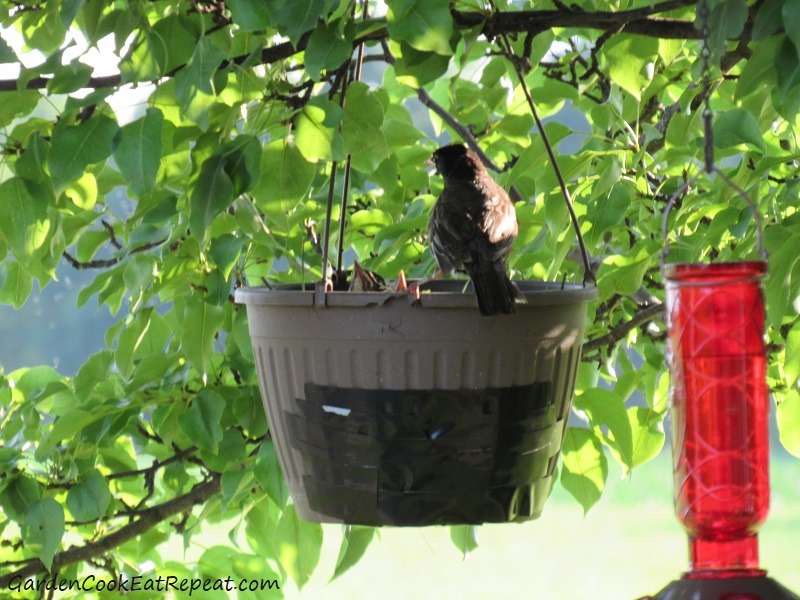 Mama hopped in. She dipped down with a worm. The babies were fed. 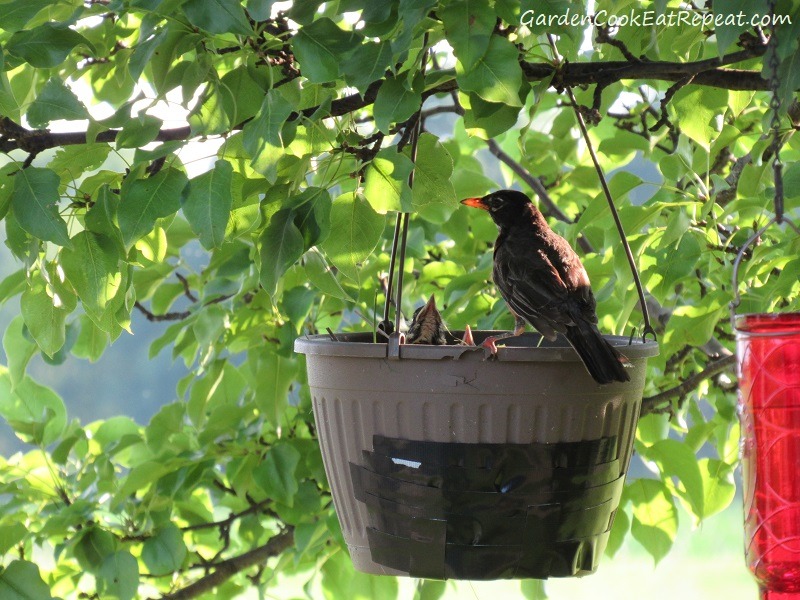 And so it began, our vigil and Mama bird’s endless food delivery service, back and forth, seemingly hundreds of times a day. The babies appeared to grow bigger overnight – and got a little plucky in the basket. Up and curious. 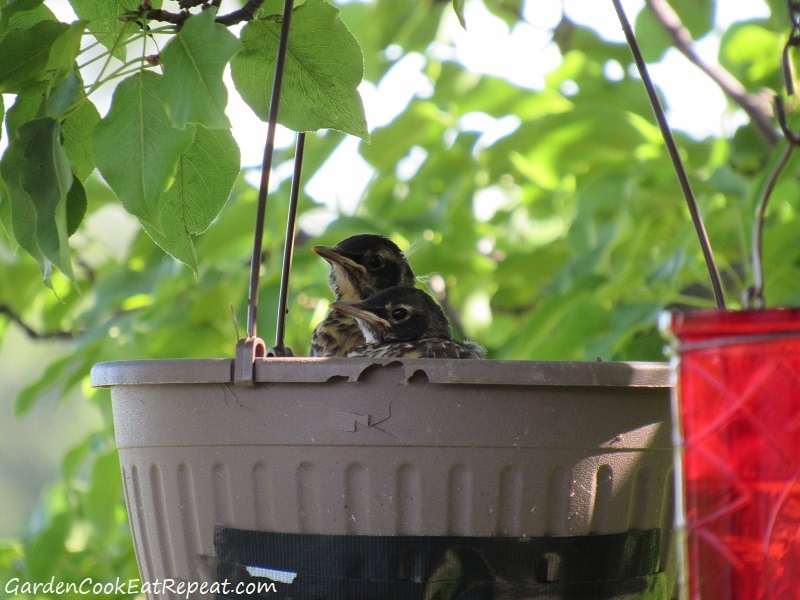 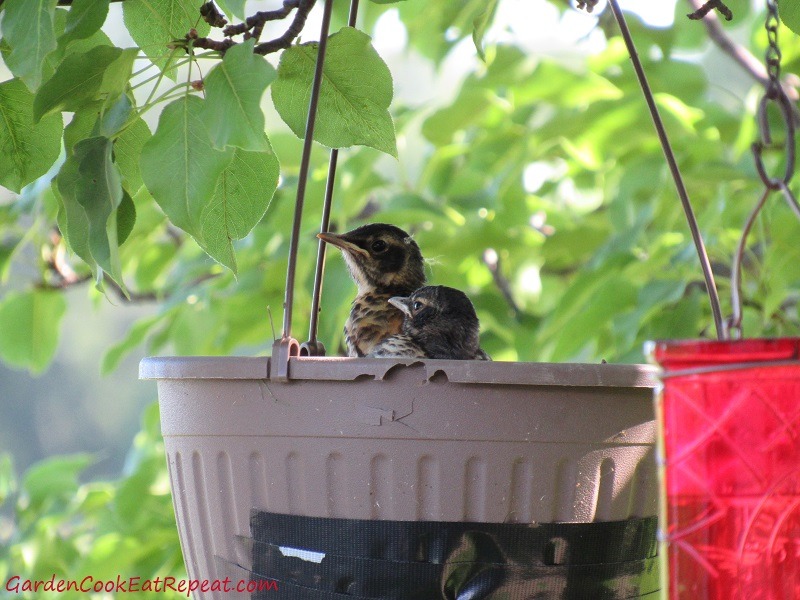 Get away from the edge!

I cringed and watched through the kitchen window. 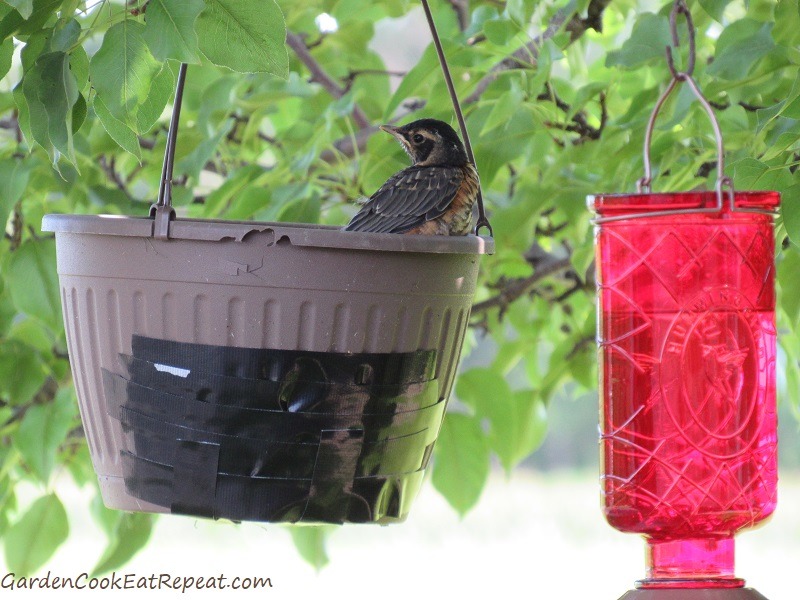 But, they suddenly seemed bigger. I said to Mr. Gordon: I wonder when they will be ready to go?

One morning soon after that, I looked out the kitchen window and saw no heads popping up, no flapping of growing wings on the edge of the basket-nest. Were there no birds? No, it can’t be! Were they really ready to go? Could they have left? And where is Mama bird? I watched. Nothing.

He put up a ladder. I watched from the kitchen window. He cut down the basket from the tree.

The birds were gone. No sign of foul play.

Were they there the day before?

Yes, yes I think they were. We saw Mama bird, right?

So they just flew away, right?

Yes, they must have.

All three… Just flew the nest. Just like that?

So we didn’t witness the big moment, my friends, when “our” baby birds left the nest. But we did interfere that stormy day. And lucky birds, it had a happy ending.