This Post: Gardening Update – When gardens don’t go as planned.

We’re entering the last week of July and I’m just going to say it: this has been a rough gardening year. Why is everything harder and so out of whack in 2020? Don’t answer that.

From the get-go, it’s been tough with the plants. We were staying at home religiously at the beginning of the pandemic, and I didn’t have all the gardening supplies I would have normally picked up for seedling starting. Still, I had compost from last year and some organic peat pellets, a few peat pots, etc. The rest I improvised, like using leftover dixie cups. 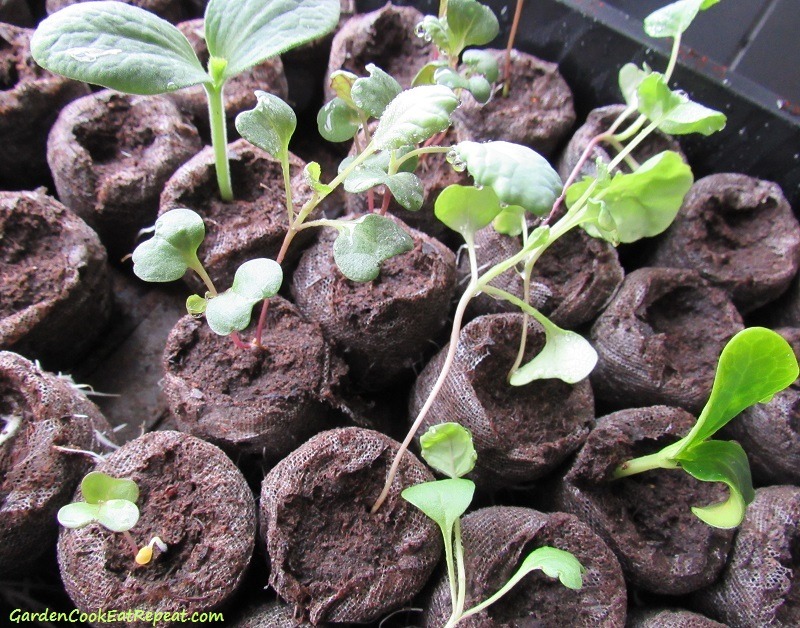 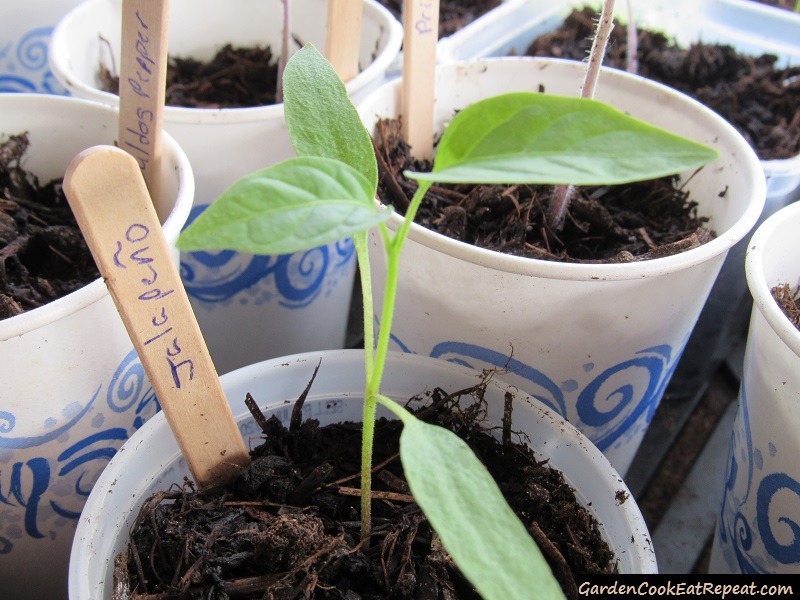 And although the squash seedlings looked good – more on that later – so many seeds did not germinate this year. I also used LED grow lights for the first time versus the usual T5 fluorescent lights. Call me crazy, but I think the lights stunted my kitchen herbs. My basil is stuck at 1 inch (seriously! and I planted the seeds in February) and the chives just never came up. Admittedly, I have yet to grow chives successfully regardless of grow lights. I struggle with onions, too.

My tomatoes were incredibly frail when I transplanted them. In May. While it hailed. (We covered the row with a white hoop cloth to protect them.) My broccoli and Brussels sprouts… looked pretty good when I transplanted 9 seedlings into the garden. But between the bugs and the birds: gone.

Cucumber seedlings – I tried to start them several times – never germinated this past spring. I finally broke down and bought two very healthy-looking Straight 8 cucumber seedlings and planted them. The birds – pretty sure it’s the damn Robins – ate them down to stubs. One came back… and then was eaten again. God love it, it’s trying again and this time it might make it. 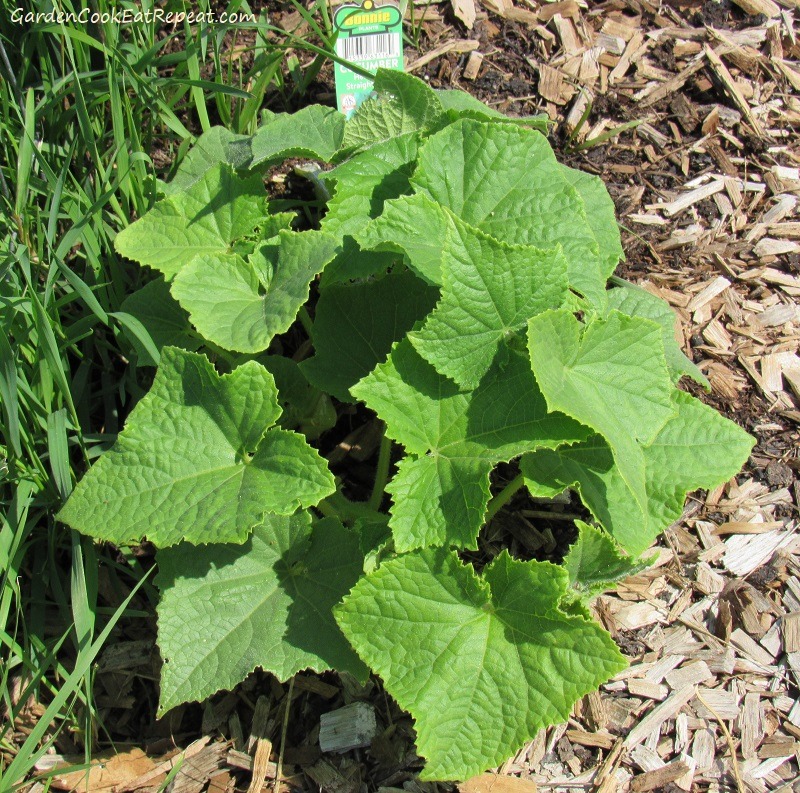 The transplanted tomato seedlings were doing poorly under the white cloth row cover so we took it off. We had lost most transplants and were down to a handful barely hanging on. 🙁

The direct sow Golden Globe Turnips and Tall Utah Celery never came up. Leeks? Nope. Onions? Some. Again, I never seem to have a lot of success with onions and chives – I won’t have a huge harvest. Same with carrots. Ruby Queen Beets, usually our first great crop, have been slow to start. But, they are improving. I plant those in succession and the second crop started looks like it will have a better yield, although still smaller than usual. 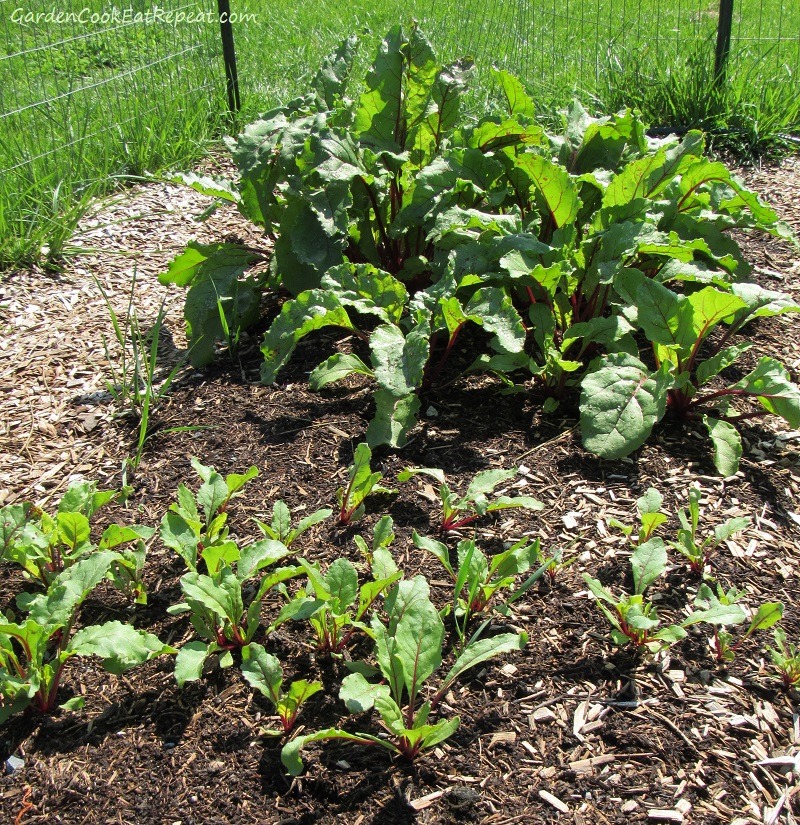 Squash: We planted the squash (four varieties) in a whole new section that is designated for our next year’s fruit trees. This Blue Hubbard Squash was looking damn good and I was excited. 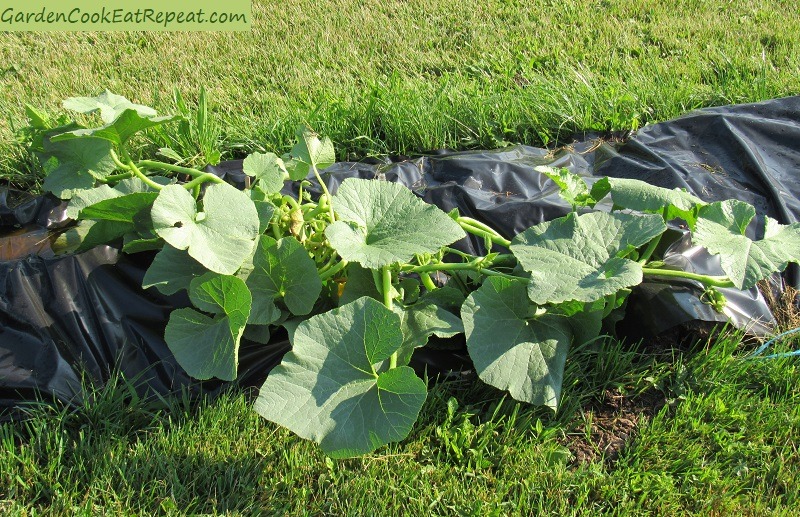 But… was it bugs? That Blue Hubbard Squash plant pictured above? Pretty much gone in a couple of days. See below. We know there was some cucumber beetles, but we are not sure that’s the cause. Maybe a disease? We don’t know. We have since pulled it out of the row. The lone Black Beauty Zucchini Squash I had transplanted was gone long before that – not to squash bugs, but something got it early on. Cut worms? Again, we just don’t know… 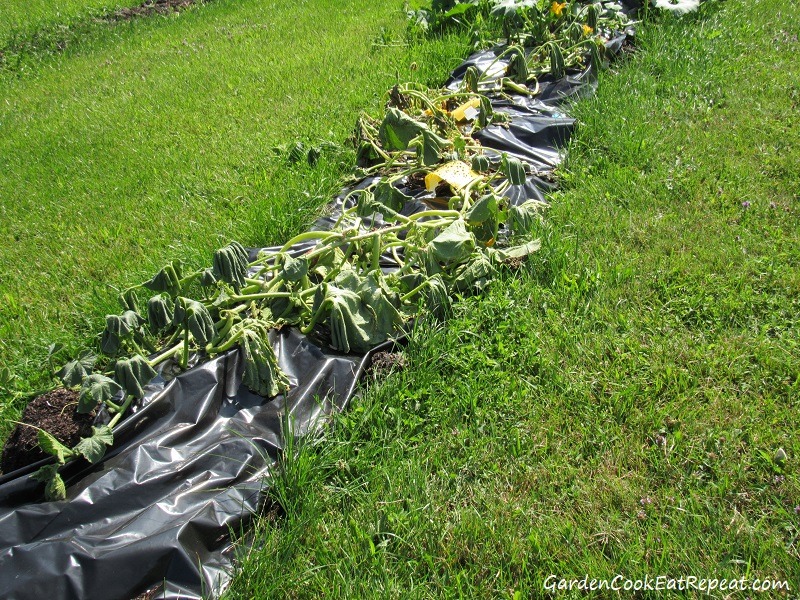 Mr. Gordon at one point asked, why are we doing this?

Yeah. Why? It would be easy to give up. I don’t know… do the math. Is it really worth all the work, time, and the money we do spend?

Okay, here’s where I landed: some years are going to be harder and tougher than others. This might be one of those years. I think we can all agree, 2020 is just a bad one overall so far.

And yet… The lower garden began to produce new tomato plants all over the place. These brave “volunteers” grew from prior years’ tomatoes that had hit the ground and dropped in seeds. Nature, my friends, doesn’t give up as fast as humans often do. We let those “homegrown in the garden” seedlings come up (you go, mighty mighty Amish Paste!), get stronger, and then transplanted them to the tomatoes row. We anticipate a mix of Amish Paste and Rutgers – two of our favorites. 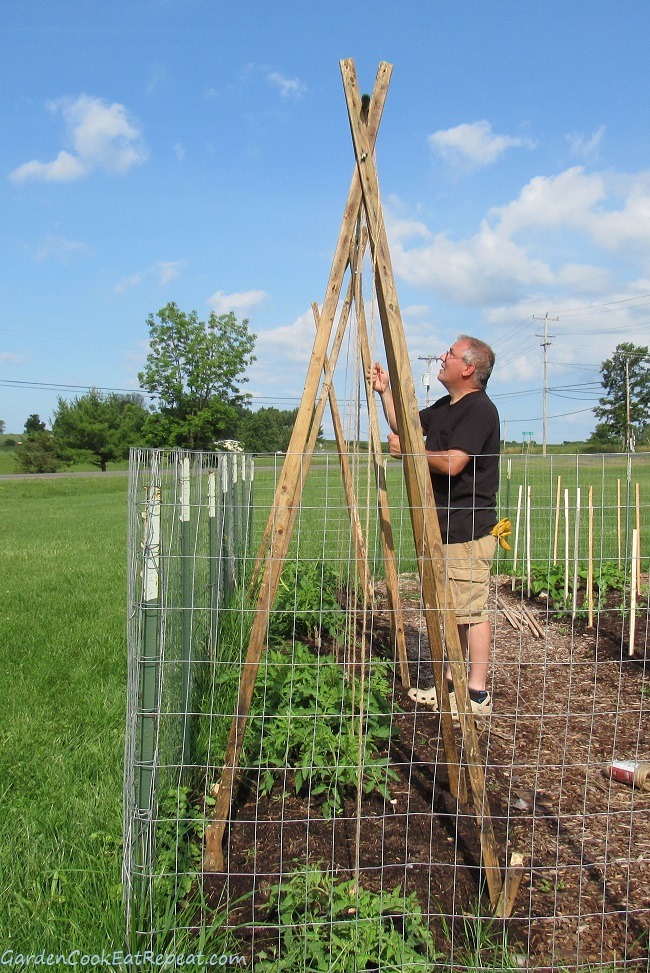 The Black Beauty Zucchini seeds I direct sow planted in the upper garden in a moment of prayer and hope? So far so good. We’ve been harvesting fresh zucchini and it is AWESOME. If this works, I am doing direct sow of zucchini from here on out! 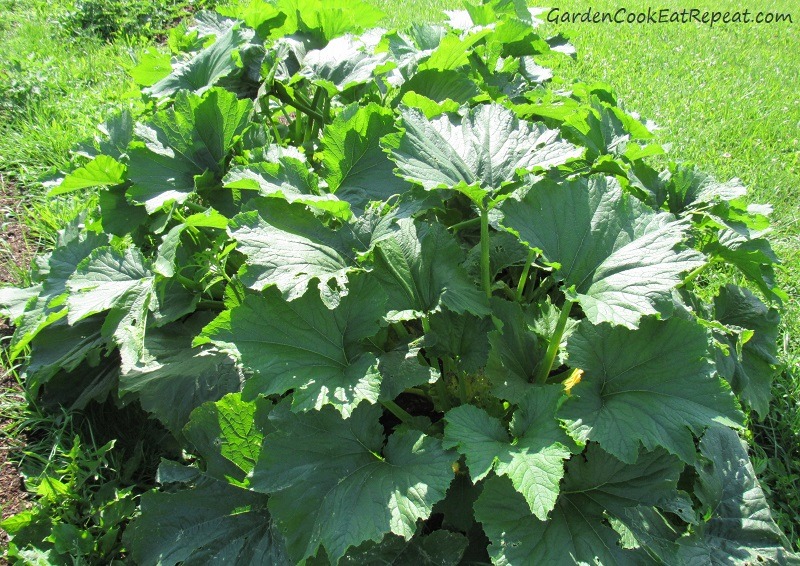 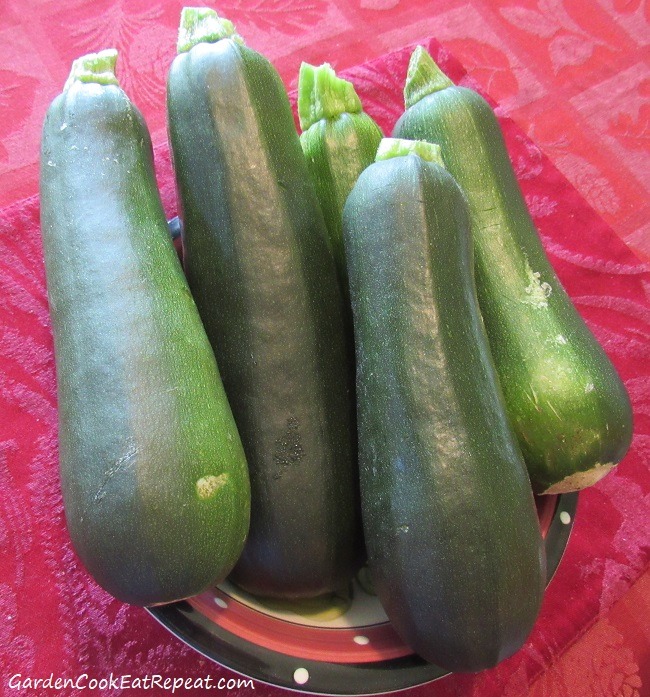 We enjoyed a pretty decent harvest of garlic (Music, Chesnok Red, German Extra Hardy) in July. We had planted the three varieties last fall. Surprisingly, the German Extra Hardy were very small. But all in all, not bad for a first real “harvest.”

This fall, we might only plant Chesnok Red and Music, though. They seemed to grow the best. 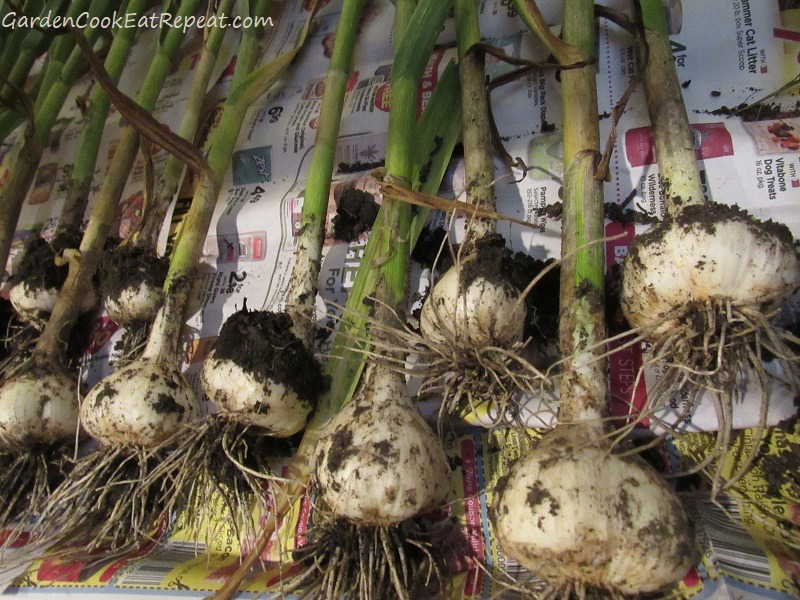 Apparently we ARE potato growers.

Four varieties (Dark Red Norland, Elba Whites, Yukon Gem, and Keuka Gold) are looking good – although we are out of compost to add any more layers. Well, we’ll make do with what we have. 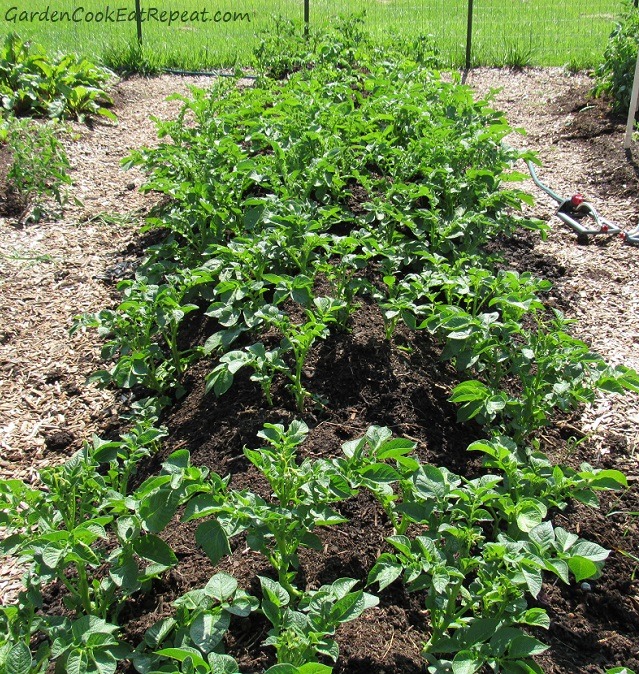 The Gold Rush Yellow Wax Beans – a bush variety – were off to a slow start, but they are coming around. The Green Arrow Shell Peas and Sugar Snap Peas have their stakes and lowest twine in place. We’ll add more when we pick some up. I forgot to soak the peas before planting, and again, that lead to a slow start. At the end of the row, Firminio’s Tomatoes grow. 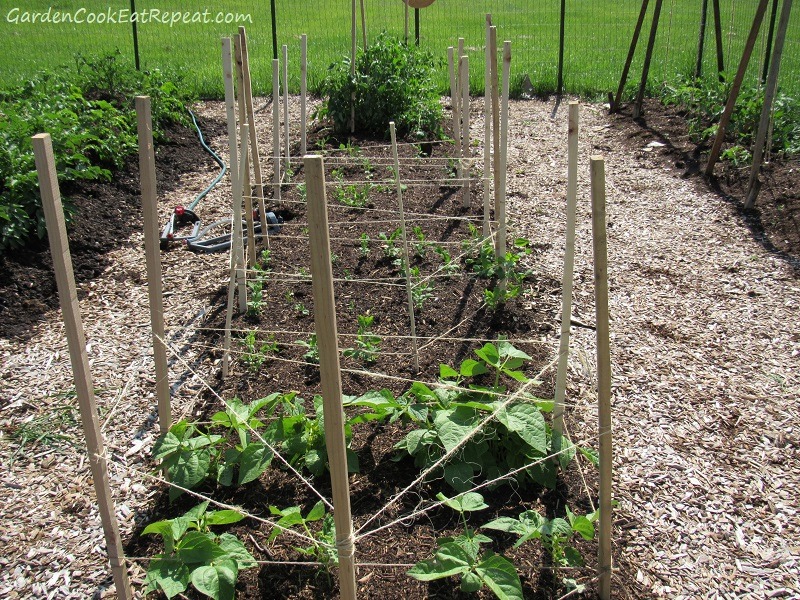 We are starting to see a smattering of the Rudolph Radish.

They are so cute. 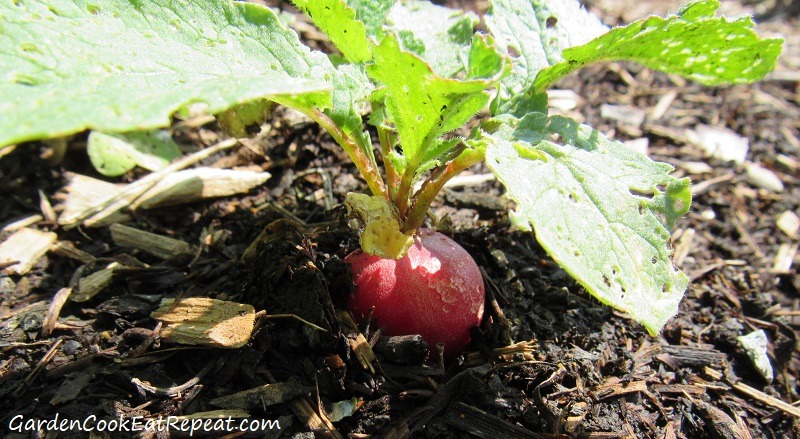 The pepper seedlings did not fare well. The Tam Jalapenos all failed – a huge disappointment. All but one Joe’s Long Cayenne pepper plants didn’t make it. The Bridge to Paris peppers are holding on (below) and so are three of the Boldog Hungarian Paprika Spice peppers.

But, even with that wicked heat wave that we had, the plants haven’t been growing as fast as I would expect. 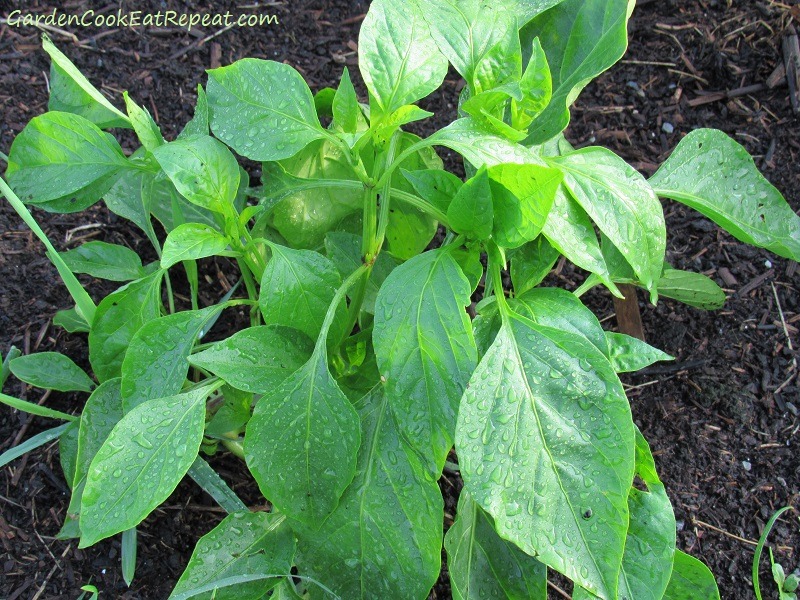 The Dutch Red Shallots have been harvested fully as of today!

This variety, planted in the Upper Garden in fall 2019, is supposed to keep well in storage. 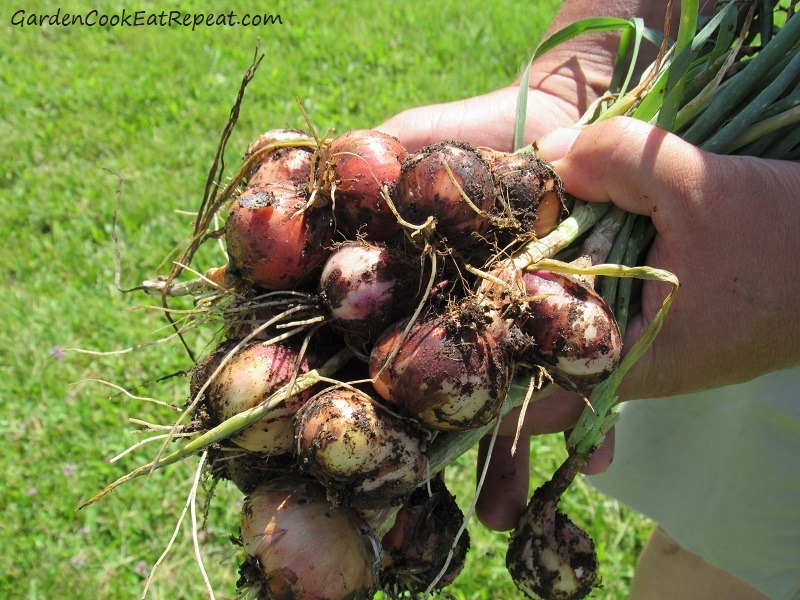 Two harvests of the shallots = about 95 bulbs pulled!

This is the last of them, in the photo below. Five were small and reminded me of fresh green onions, so that’s how I’m going to treat them. 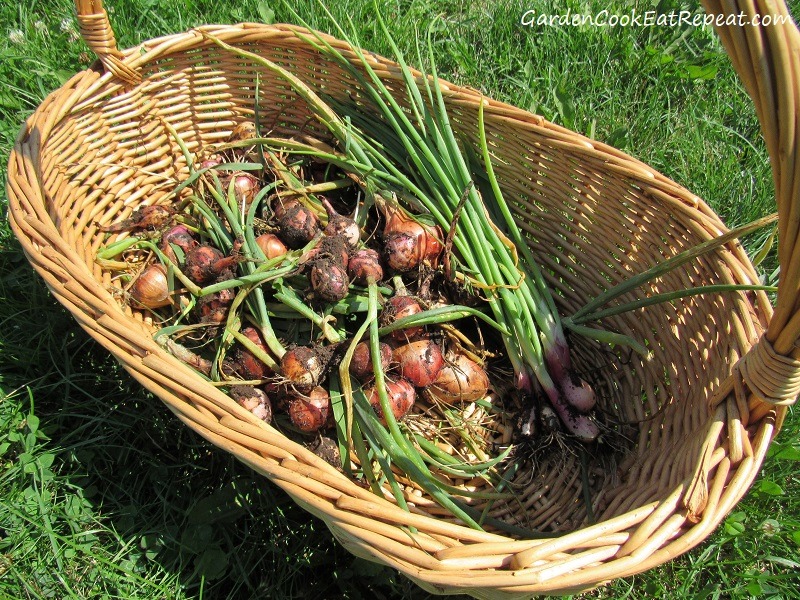 We have been drying the garlic and shallots on wire racks in the basement. 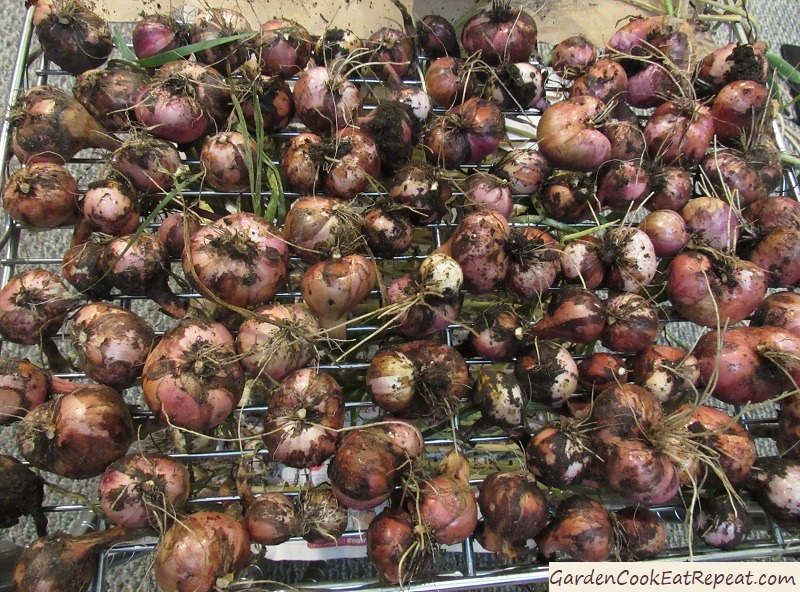 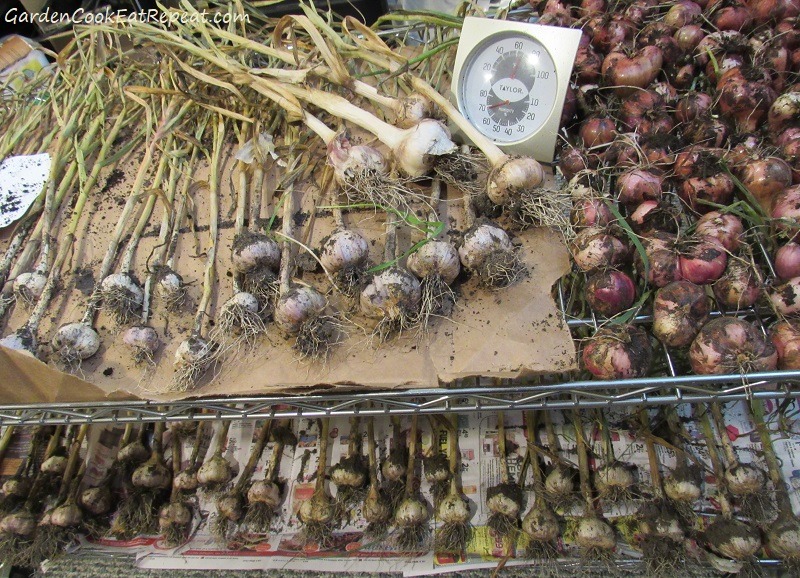 I’m hoping one or two are also the Rutgers Tomato variety – they are very good “eating” tomatoes. 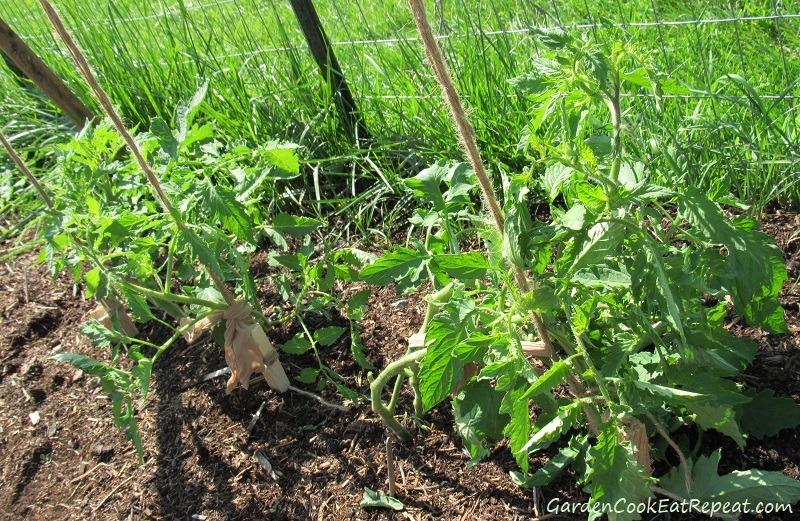 Remember, the tomato plants are smaller than usual for this time of year since the seedlings either failed (most of them) and those that made it were stunted. Or, they are the “volunteers” growing from seed in the garden. Kind of makes you wonder: If these are plants growing from seed from tomatoes that toppled to the ground in the garden last year, maybe they are right on time and just the right size.

And hopefully, Mother Nature will help the remaining squash survive and thrive. 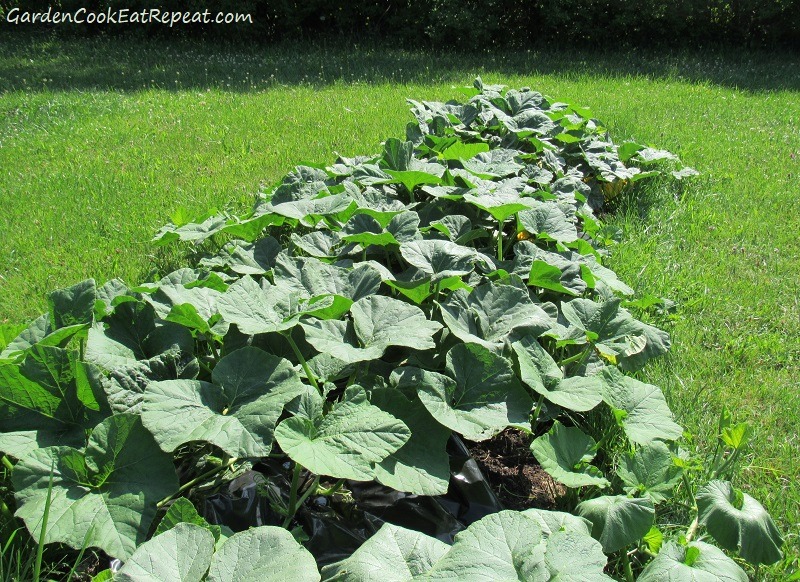 Above the Upper Garden, Mr. Gordon covered the second row of sheep manure to discourage weed growth. This will overwinter and in spring 2021, we hope to finally plant our fruit trees. 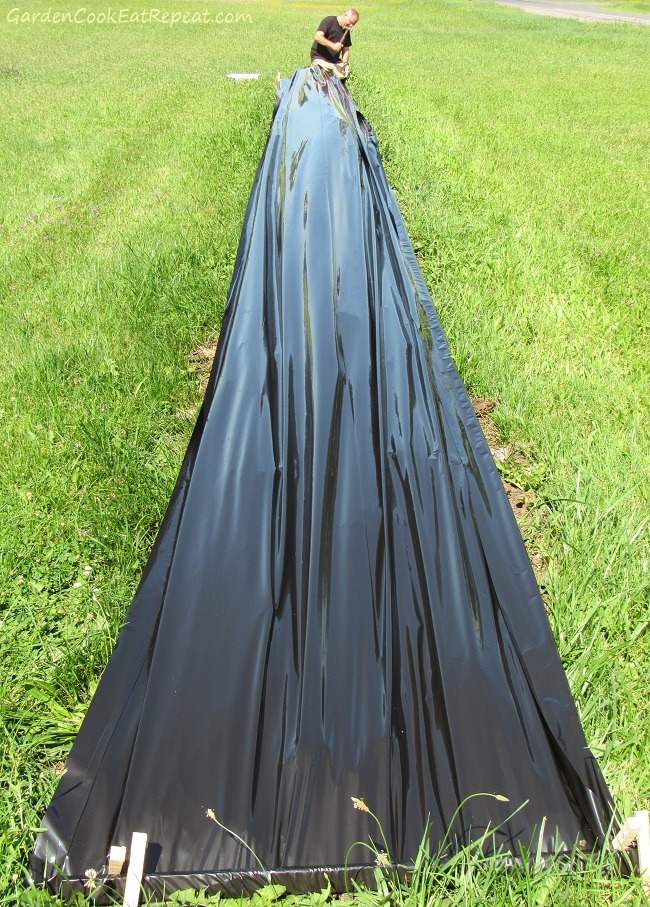 So… a lot of challenges this year, some disappointments, and some surprises that served us well. We’re not out of the woods yet. Until we are harvesting and “putting up” food we won’t know what we truly will have.

We’ve also discussed not using the Upper Garden after this year, but instead extending the Lower Garden (doubling it) to the West. I think we probably will.

We plan, we act, we adjust, we learn, we discuss, we make changes when we need to.

How Does Your Garden Grow?

How is it going for you? I hope you have not had the challenges we’ve experienced this year.

But if you ARE having your own share of troubles, how are you dealing with it and what’s the plan?