Years ago, when we still were living in our city home, we dreamed of a little homestead in the countryside where we would have big gardens and chickens. We carried this dream with us for over a decade as we looked for a place – and a way – to buy our country home.

Back then, our teeny, tiny, heavily-shaded backyard was no place for chickens. Actually, it was no place for a garden either, as many unsuccessful attempts proved. Hosta plants, yes. Tomatoes, no. 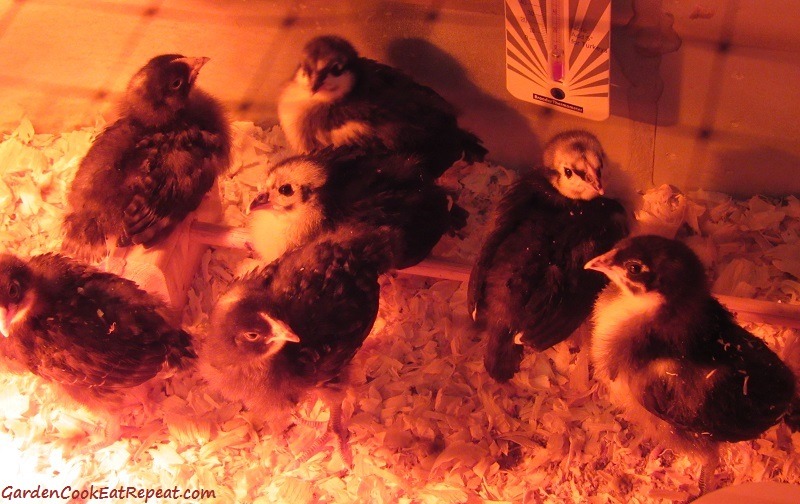 Fast forward: We moved to our home(stead) here in September of 2017. A couple of sunny acres and plenty of space for gardens and even chickens. As we settled in that first season, we realized we had an opportunity to purchase solar panels for our roof (we are in the perfect location with a southern-facing roof) and take advantage of state and federal tax rebates (to the tune of over $10,000) to off-set the cost. We decided that renewable energy – plus our first fenced-in 24 X 24 garden – would be where we put our budget and energy. Then maybe chickens in 2019?

Mr. Gordon’s son was raising up to 20 chickens or so downstate at his place. We met the chickens, heard about the pros and cons, the challenges, etc. We had to really be honest and ask ourselves: Are we ready to take on the responsibility for chickens?

I changed jobs at the end of 2018, and Mr. Gordon changed jobs in 2019. Also in 2019, my department had a major shake-up and I was worried I might not be employed for long. We decided our only expansion in 2019 would be more garden space.

As we entered into 2020, we thought our “expansion” for the year would be fruit trees. We were doing our research and still trying to nail down exactly where we wanted our orchard to go. We were “this close” to ordering trees when we went back to two items: 1) we still could not agree on location of the orchard, and because we did not have a location designated, 2) we hadn’t employed the advice to take a year to prepare the soil for the trees. It’s this constant evaluation that we hope helps us be successful when we do act.

Where we landed: Let’s finally determine a space and prepare the soil for a year. Okay. And then we decided: It’s time to get our chicks. I’ve been working from home full-time since fall 2019 (good timing); we have the budget for chickens and a coop; and even Mr. Gordon is working from home (temporarily) and can help care for the chicks in the first weeks of their lives. Done and done.

And then, the frightening public health crisis (C-19) landed in everyone’s lap! It impacted our plans, certainly with sourcing the laying breeds we wanted – I always wanted to include silver-laced Wyandottes, but alas, it was not to be. But, we did get two of the other breeds we planned: four Australorps and four Plymouth Barred Rocks. Both should do fine in our upstate NY winter weather. For me, that – along with friendly, productive egg-layers – was very important. 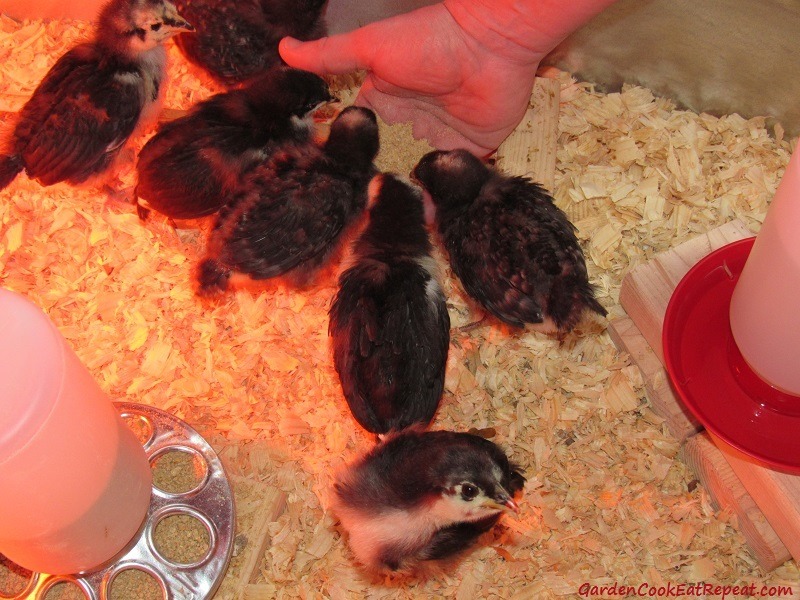 That’s Maxine at the bottom of the photo, posing.

And so it began…

We brought our girls home at the beginning of April 2020. Brooder, lamps (2) and bulbs (2), brooder thermometer, starter feed, litter… feeder, waterer… And away we go!

Things we learned in the couple of weeks:

Their personalities are definitely coming through!

The four Australorps are Penelope, Daisy, Maxine, and Zorro. Penelope and Daisy are probably the biggest of all the eight chicks. Daisy is no wilting flower. I hope she won’t be a bully. She’s a little pushy now and again. Penelope seems like she wants to be the boss, but the Barred Rocks have decided that… “…that Penelope, she thinks she’s the boss of us… but she’s not!”

I will tell you that Penelope has a big, gorgeous wingspan. When she flaps, it’s just glorious. 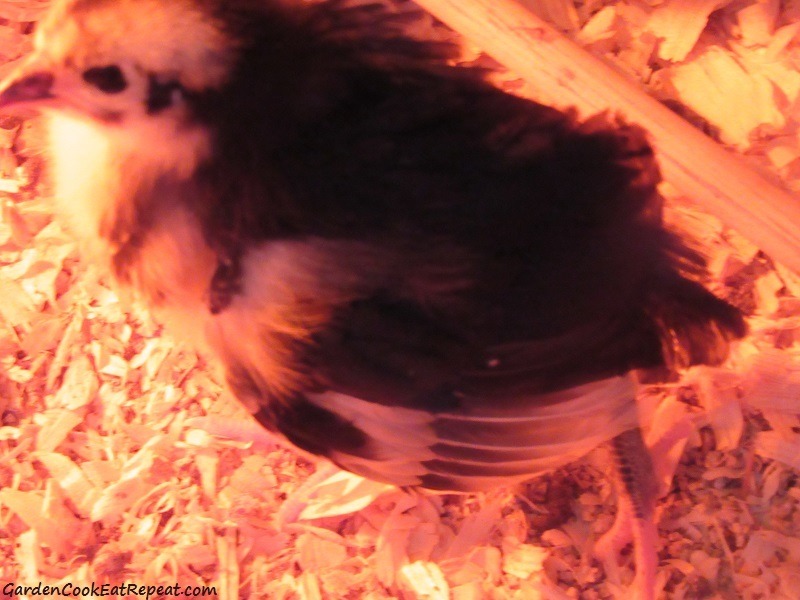 A Peek at Penelope’s Wing.

Maxine and Zorro are the shyest of all the chicks. Maxine looks like she’s wearing charcoal eyeliner and donning a light-colored cream stole around her shoulders. Her “mane of hair” is black and sleek. Zorro, so-named for her little black mask, tries to avoid all excitement no matter what. She hides behind the mask. 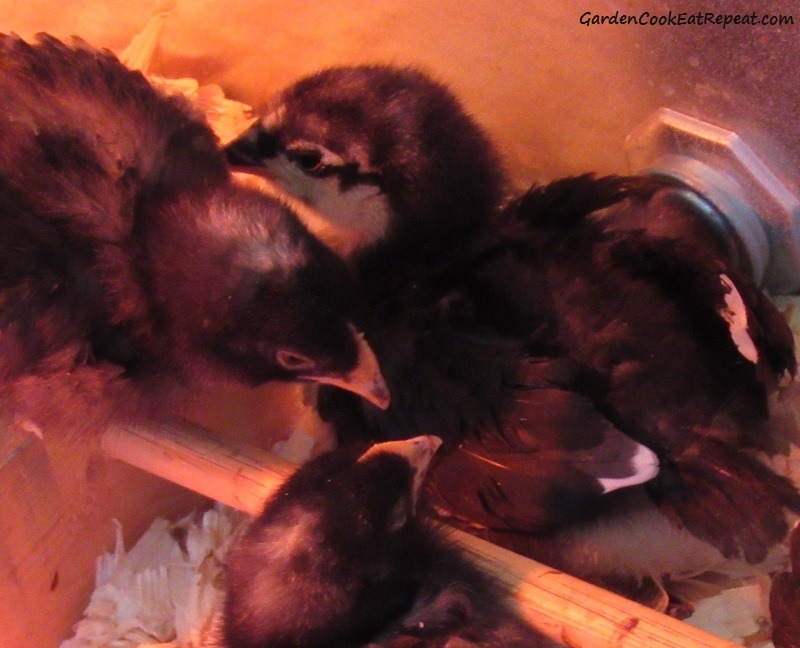 Maxine all snuggled in. 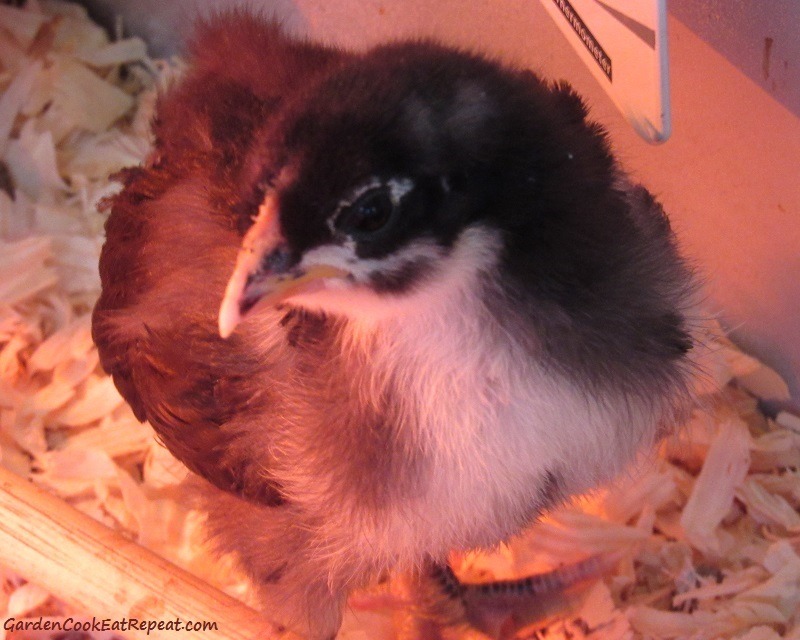 The Barred Rocks are a little harder to tell apart. Mr. Gordon noticed the markings on their beaks have slight variations, so we are starting to get an inkling. At first I was calling the tiniest one Charlie (from the song Charlie Dunn, the little frail one), but she got bigger! “The Bards” – as we are calling them – are the rowdy girls. 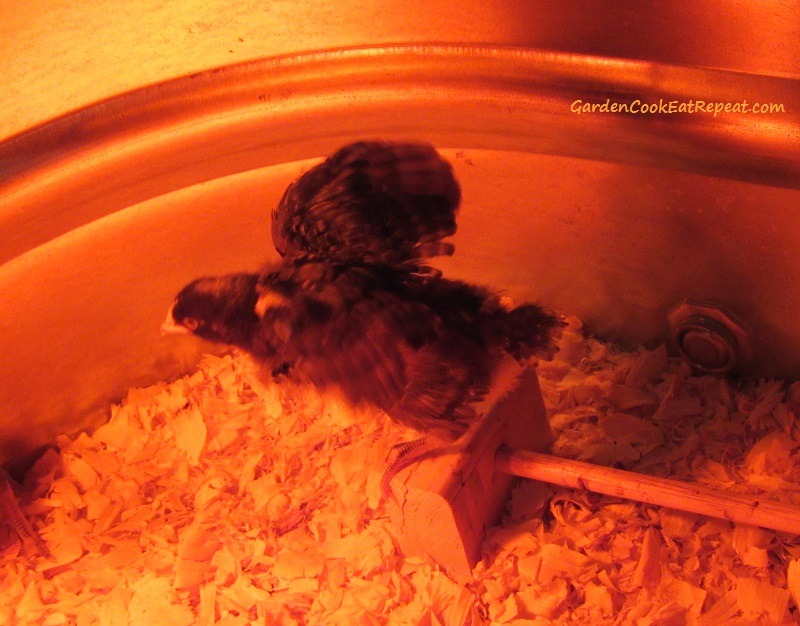 There’s one in particular, I’m pretty sure it’s her every time, that I’ve been calling Alice. She is a curious one, that chick. Kind of like… what can I do next? What can I fly to next? How can I get the others all stirred up? She looks me right in the eye. She’s fearless, that one. 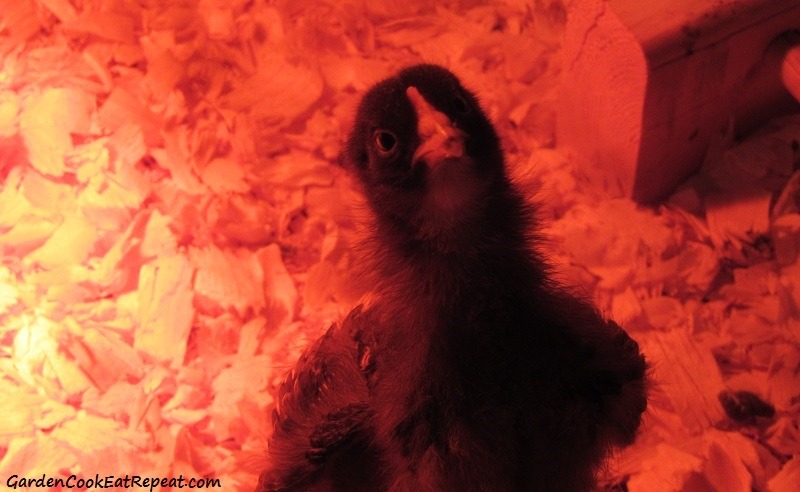 This might be Alice… she’s got “that look” on her face… Trouble, that one. 😉

“The Bards” are beginning to get their white checks on their wings, and if you look super close, you can see teeny, tiny flesh-colored combs low on their brows. 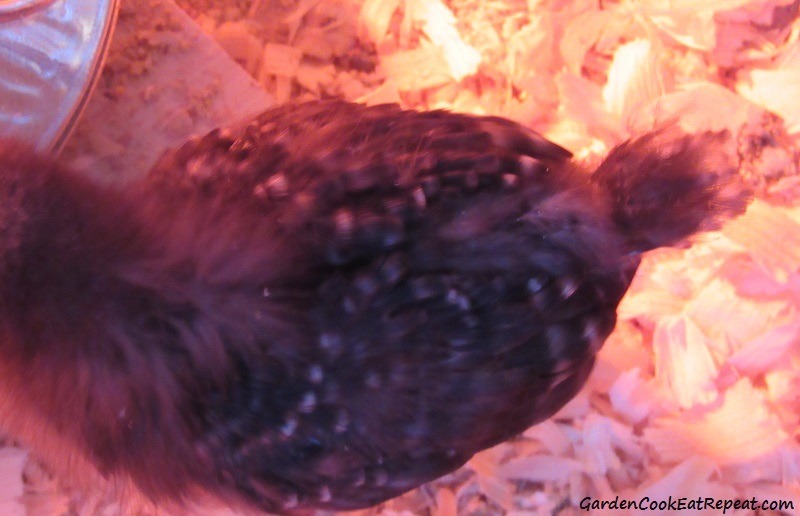 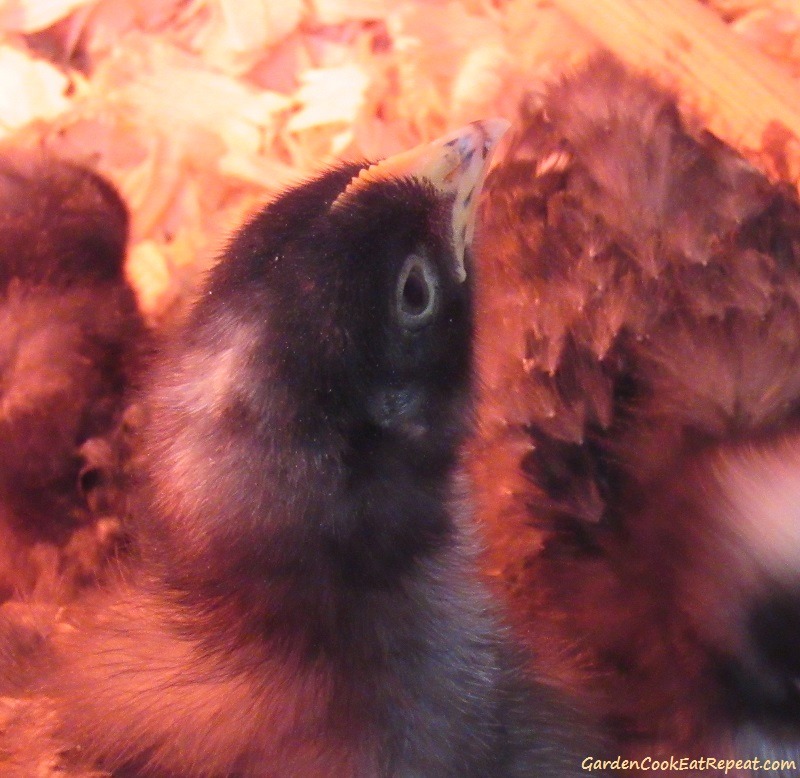 How easy it is to fall in love with these creatures! At the same time, they are not “pets” in the sense that a cat or a dog would be. And still, I do feel fiercely protective of them already. 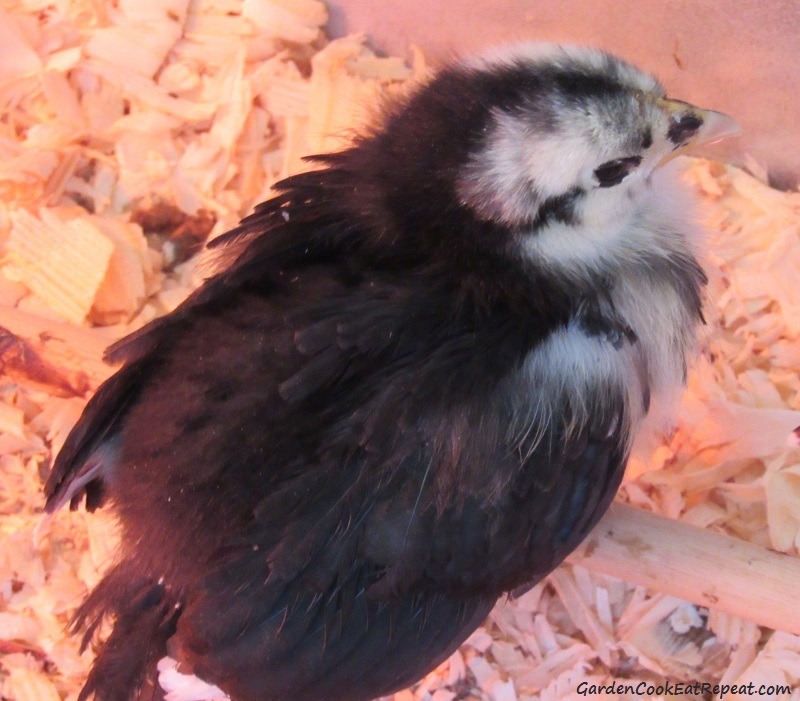 Penelope on the Roost 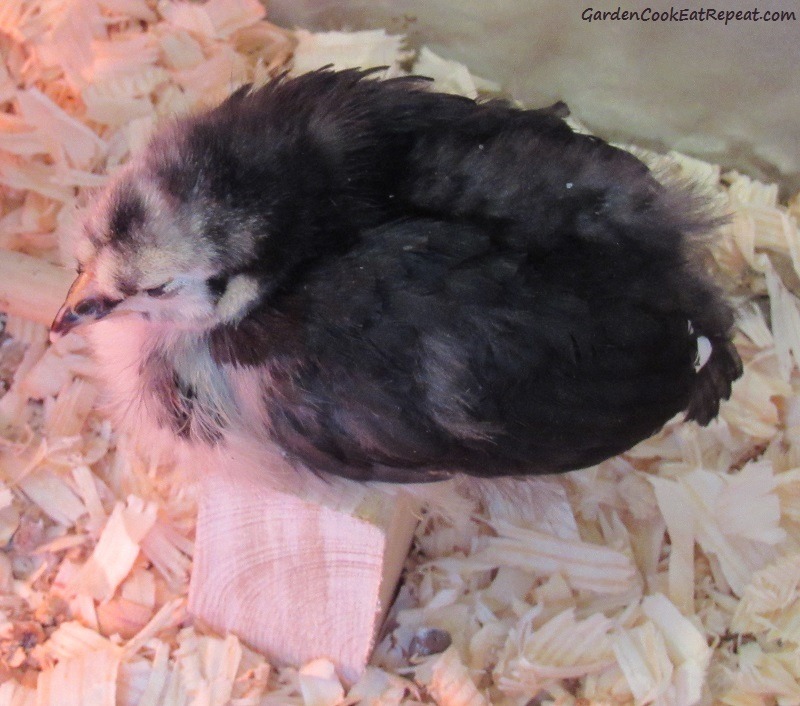 Our girls (laying breeds) are for eggs. I am not interested in doing meat birds. It is hard to imagine in a few short weeks they will be living outside in their own (fortified) coop and run. I probably won’t get much sleep that first weekend they are in their new digs. 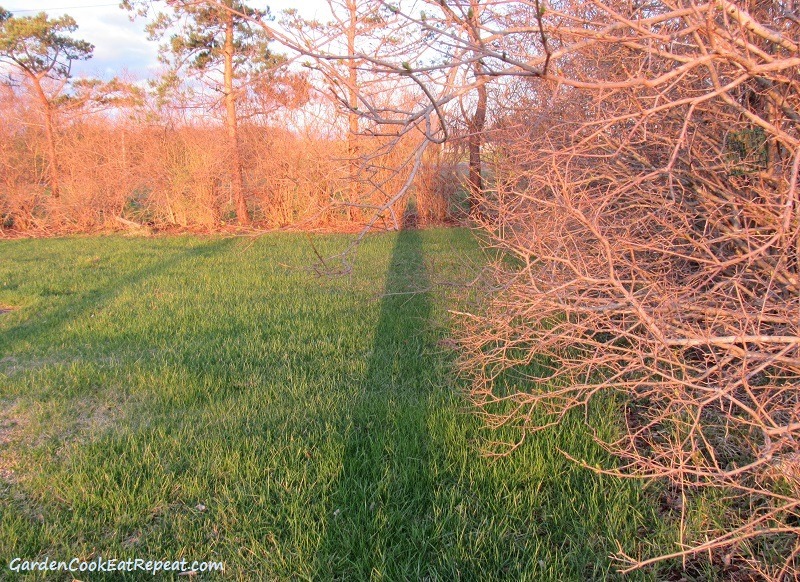 We’ve always known where the coop would go. 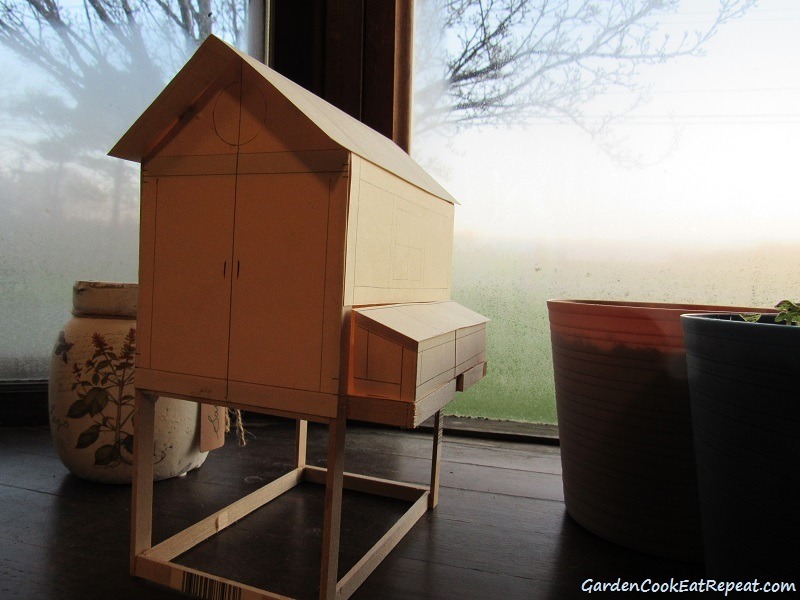 Mr. Gordon’s model of what the coop could look like.

Supplies for the coop arrived and are stacked in the garage. Weather permitting, building starts in two days…

We wanted and brought home chickens because this is part of understanding (again) where our food comes from – we eat a lot of eggs – and also becoming more self-sufficient. It’s about caring for the animals that provide food for us. At mid-life, this is our first foray into raising animals as a food resource. For many of YOU, you’ve already been there, done that. It might still be exciting, it might be routine. I suppose for us it will just become one of life’s routines at some point.

But I still hope to remain excited. 🙂

Chickens, or no chickens? Past, present, or future?

(Photos on this page taken with my Canon PowerShot SX530 HS Camera.)