Tracy’s Intro: We are taking 6 gallon bags of last year’s tomatoes (we froze them whole) and are making a bit of pasta sauce. Actually, Mr. Gordon is making the sauce… I’m hanging out enjoying the kitchen scents of sauteing garlic, shallots, and peppers. As mentioned in my last blog post, a lady where Mr. Gordon works gave him a chinois cone, pestle, and stand. Here is how it went!

It seems that even if someone doesn’t garden themselves, many people love to ask questions about our garden. Small talk at work ends up being a conversation about how big the garden is, what Tracy and I grow, how we put food up, etc.

I told one co-worker that I had six gallons of frozen whole tomatoes. She looked sort of quizzically at me, so I explained that I just ran out of time last season to can or sauce them and decided I would freeze them whole and take advantage of them when I had a little more time.

She told me that she had this device that would be great for me if I wanted to sauce those tomatoes. She explained that you clamp it to the counter and it has this handle… you put the tomatoes in a hopper and the pulp comes out, but the skin and seeds get separated out, too. “I’ll bring it in tomorrow for you,” she said. “It’s probably fifty years old, at least.”

As she described it, I thought she was talking about a Squeezo. I’ve coveted one for some time now, and was getting a little excited about the possibility of getting one for free. I didn’t want to appear greedy so I just said thanks. It sounded a little too good to be true.

I told Tracy about it that night, explaining that it could be a Squeezo or some totally useless kitchen gadget from days gone by.

Turns out it was neither.

Doreen presented me with the device the next morning while I grabbed a cup of coffee, saying “If it doesn’t work, I don’t want it back!” 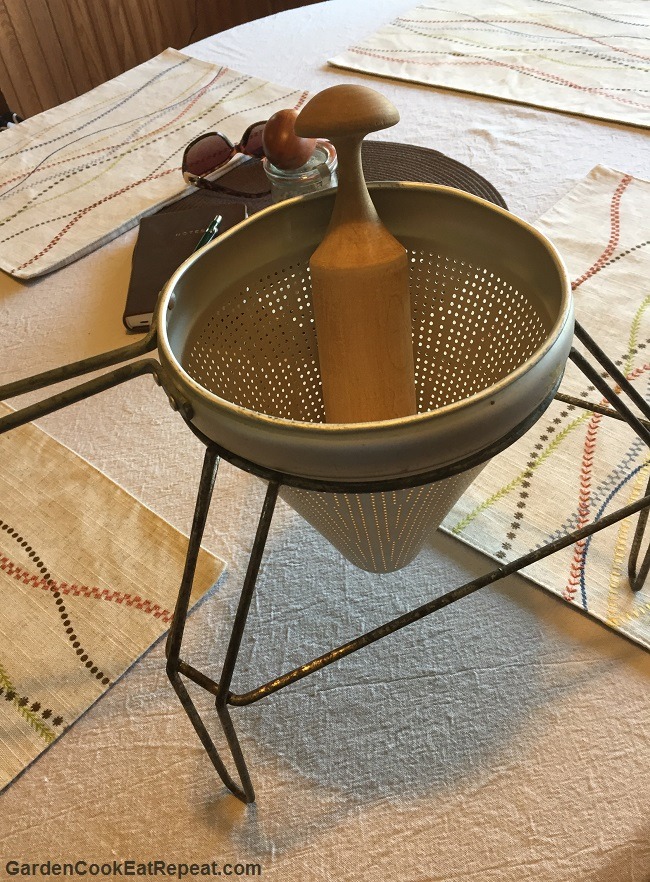 I pretty much knew it wasn’t gonna be a Squeezo. But I had never seen one of these things before. It seemed obvious how it worked. Put the stand around a bowl, put your material in the cone, and rotate the pestle to squeeze out the pulp.

I did a little internet research to see if there was any info out there on the thing. Of course, there was. It’s called a Chinois (Sheen-wah) Cone, apparently because the French decided it looked like a Chinese hat.

I’m an optimist, so I set up a reminder to take the tomatoes out of the freezer Friday so I could experiment with the device Saturday. My highest hope was that we’d get a few quarts of sauce.

An aside, when I decided to freeze the tomatoes last year, I searched on the best way to do that. Here’s what I learned:

Back to our experiment: Friday morning, Tracy put the bags of tomatoes on the counter to thaw in sauce pots. 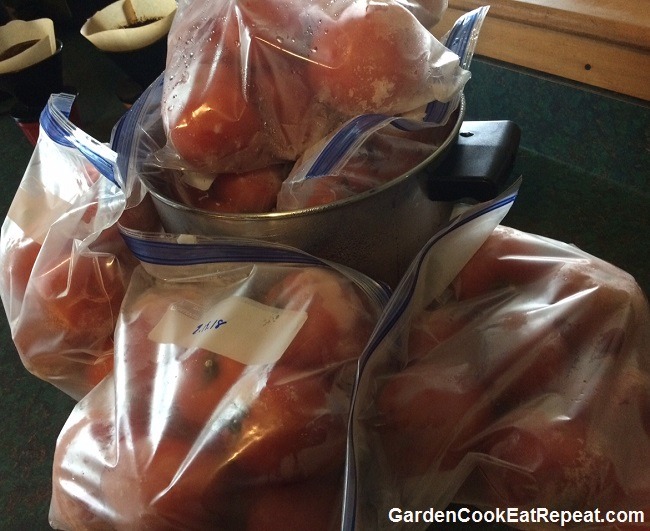 Saturday came, and it was time to give it a go. I had orders from the boss (Tracy’s note: HAHAHA!) to sterilize the thing, and so I did just that by water bathing it for 10 minutes at boiling and also thoroughly washing the pestle.

With that done it was time to start saucing. 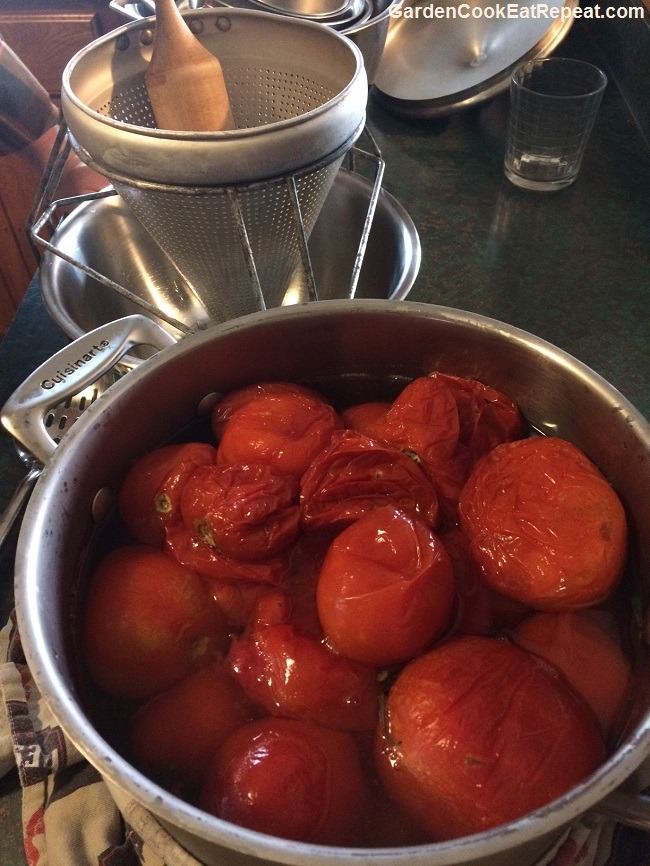 It was a little awkward at first, and as I persisted I realized I was putting too many tomatoes in at a time. Eventually I found my rhythm and Tracy and I had those six gallons reduced to sauce in no time. Some of the tomatoes had stems still on; I didn’t bother taking them off. It didn’t seem to hinder the process at all.

I sauteed some onion, garlic, and peppers and added them to the sauce. Onto the stove top to reduce, and after seasoning with Italian herbs, salt and pepper, we took the 6 quarts of sauce and reduced to about 4 for the final product. 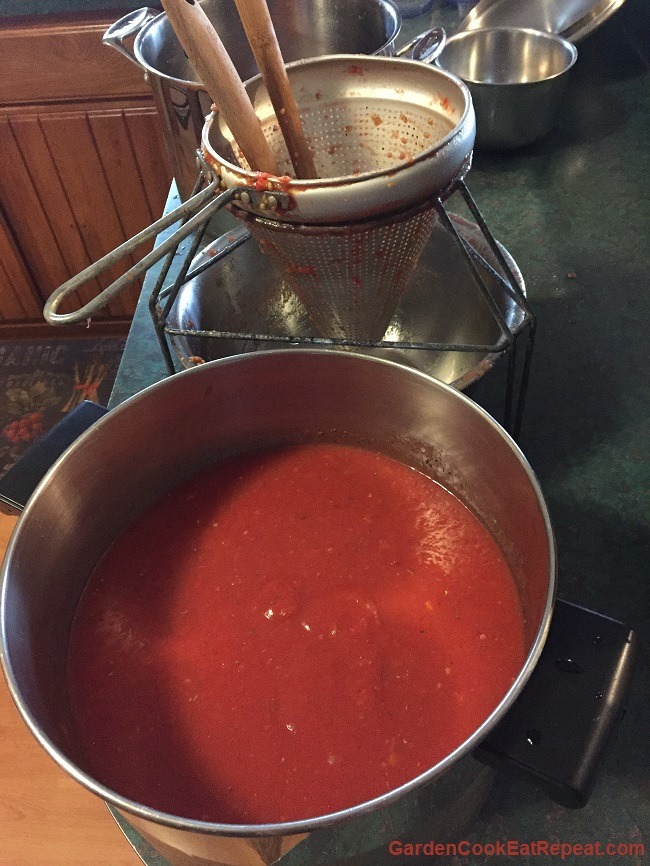 Now, I still think I want a Squeezo, but I have to say, I was impressed with how this device worked. Way better than I expected.

The thawed tomatoes were very watery and soft, and went through the holes of the cone quite easily. After every 6-8 tomatoes were sent through the sieve, I cleaned the skins and seeds off the pestle, making sure none were stuck to the bottom. When we were done pulping we put all skins, seeds, and stems into the composter.

This fall I plan to take the advice of the bloggers I read while researching; they roast about 40 pounds of tomatoes in 10 pound batches. They add garlic, herbs, sometimes carrots, and other veggies to the roasting pan. After 2 hours, they pulp everything from the roasting pan in the Chinois Cone.

If those batches turn out to be as easy as this batch was to make, I might just decide I don’t really need a Squeezo. Best of all, the original experiment showed that it is perfectly fine to freeze tomatoes whole if you plan to use them for sauce. When I decided to freeze last year, I thought the best outcome would be usable sauce, and worst would be mushy tomatoes that would be good for nothing expect going into the compost pile.

But, we got the best outcome.

We’d love to hear your stories, too. Tell us about them!

Blogging about home(steading). Big plans for our two acres and growing gardens in the Finger Lakes.