Once in awhile I browse Pinterest for recipes. (Follow us here!) I’ve found some tasty dishes. This is one of them from Closet Cooking: Chicken, Mushroom, and Wild Rice Soup.

I have declared this the Season of Soup! And the kitchen magic continues. I’ve been wanting to make this soup recipe for a few weeks now, and yesterday we picked up some wild rice blend, brown button mushrooms – perfectly acceptable for this soup – and cream at the grocery store so I could cook up some delicious soup for dinner.

Once again, the recipe is listed at Closet Cooking, so grab the full recipe there.

Let me share some of the steps I took when making this recipe and the changes I made. One of the reasons I include these is to show you that there is often little changes that can be made when following a soup recipe. Sometimes, you just do it your way using what you have or what you are willing to buy.

The recipe suggested a variety of mushrooms – which I am sure would be very good. However, for this first pot, I went with the humble yet wonderful brown, button mushroom (cremini mushrooms). Here is a pound sliced and washed – note, washed right before using and patted dry. 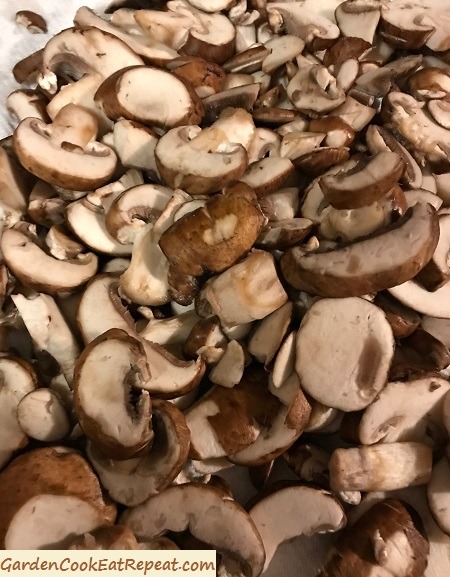 While the recipe calls for sauteing the mushrooms in 2 tablespoons of butter and some onion, I decided to saute them in the pot without the onions. They did release a lot of “juice” which I left in the pot. They also smelled divine!

After sauteing, I spooned them out and set to the side. 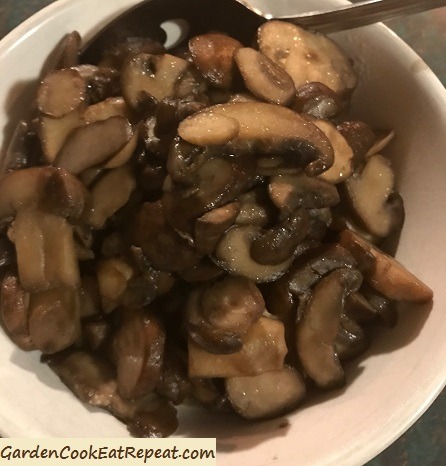 Have you heard that to cut down on “onion tears” you can burn a candle by your cutting board to help combat the sulfur an onion naturally gives off? (Mr. Gordon also reminds me to use a sharp knife, which also helps.)

But when an onion is particularly… Sulfur-etic… 😉 I burn a candle. A white one. 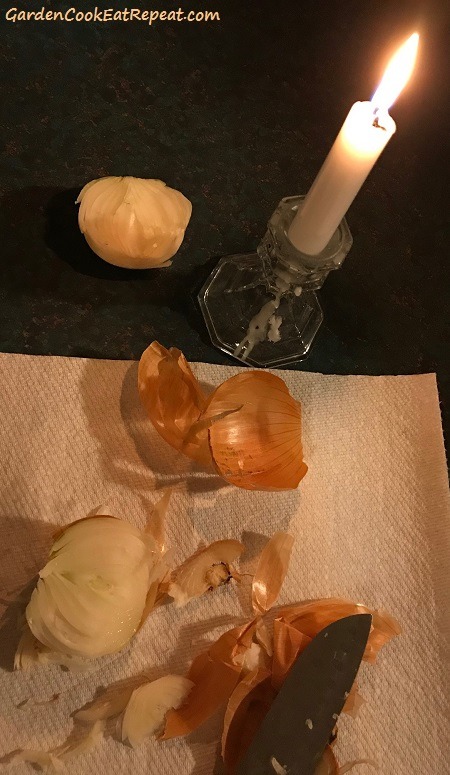 After those mushrooms were removed, more butter went into the pot followed by the onion with 2 fresh organic carrots and 2 cups of celery we grew last summer in the garden. (I froze the celery into 2-cup bags, unblanched. Came out fine.)

The recipe called for 2 stalks of celery, so I used more than called for, but the soup still came out just fine… considering that our home-grown celery is pretty potent! 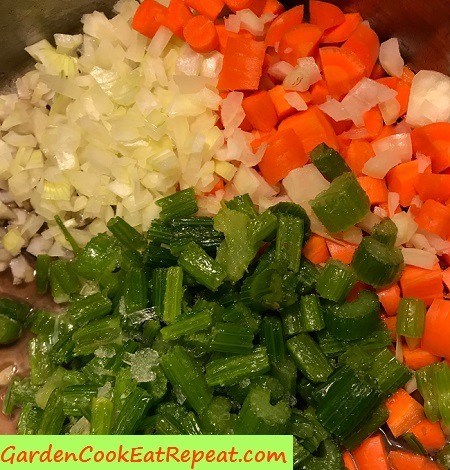 We primarily buy either a whole organic chicken for roasting, or packs of organic, boneless, skinless chicken thighs. (Although sometimes we DO buy the thighs with bone in and skin on.)

So many people eschew the chicken thigh. Why? It is full of such good flavor and it’s perfect for soup!

The recipe called for 1 and 1/2 cups chicken.

I baked up about 1 and 1/4th pounds of chicken at 350 degrees Fahrenheit for about 50 minutes, seasoned with a bit of fresh ground pepper and sea salt (little bit of olive oil went into the pan). I tend to add a bit more meat than some recipes call for. 🙂 After baking, I diced it up. 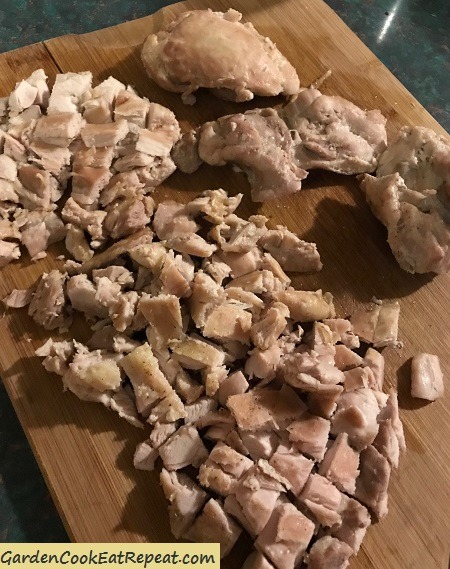 Wild rice can be expensive. The recipe called for a cup of “wild rice blend,” so we bought the organic wild rice from the bulk section at the grocery store. Just a bit over a cup cost just over $2.00. 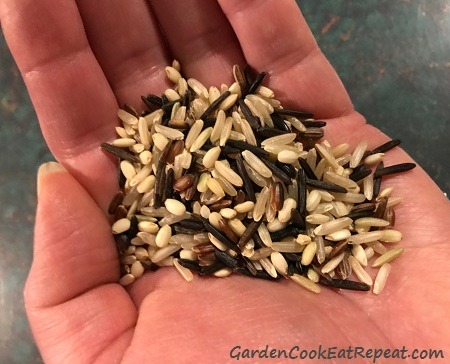 So now back into the pot: mushrooms, carrots, onions, celery, garlic, fresh Thyme from my windowsill pot, chicken, and wild rice. 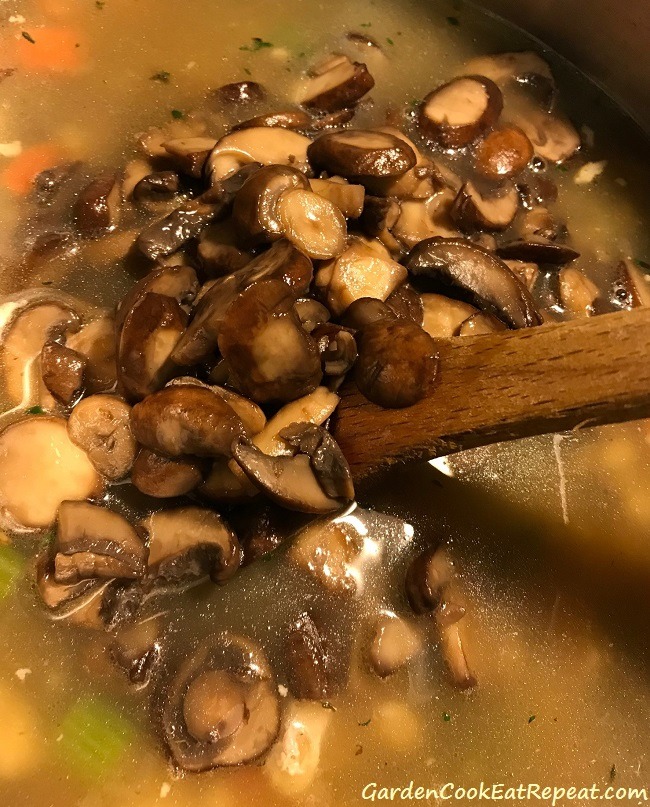 The recipe also called for 6 cups of chicken broth.

I used to stress if I didn’t have my own chicken stock when making a recipe. While I prefer to have my own on hand, I got over myself. If I don’t have chicken broth / stock in my freezer, I will buy some low-salt cans from Wegmans. I used 3 cans in the soup – close enough to 6 cups. 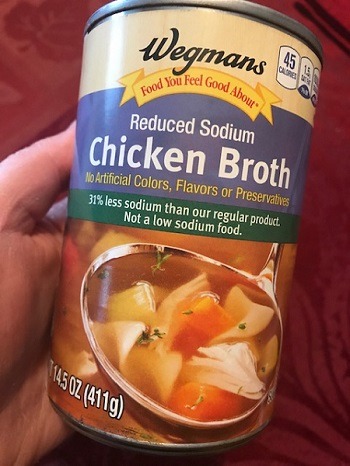 We love to snack on Maille Cornichons. This past summer for a hot minute we talked about picking some cucumbers when they were really, REALLY tiny to maybe make some of our own, but in truth, you just can’t beat Maille for their cornichons – or Dijon mustard. (Every now and then I go on a buying frenzy and stock up on Maille Dijon mustard. It’s a compulsion.) 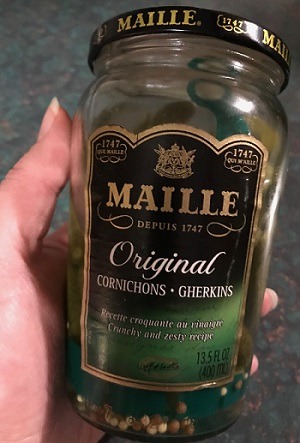 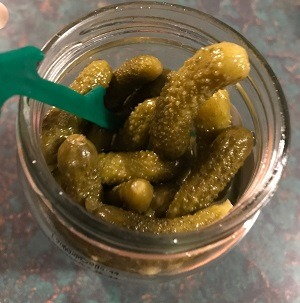 Back to the Soup!

The recipe finishes out with calling for a cup of Parmesan – here’s a shot of the freshly and finely grated cheese below. 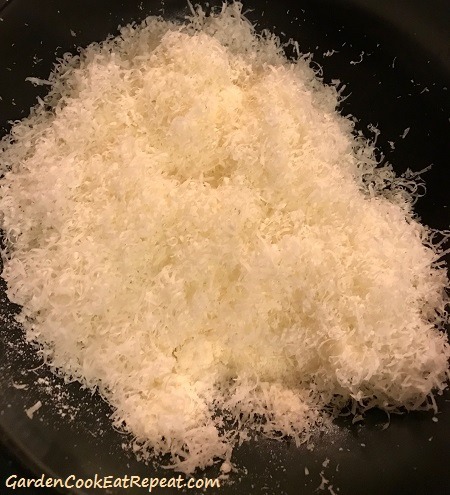 And the recipe suggests milk or cream. Oh, no contest: a cup of cream!

Add salt and pepper to taste. Go easy on the seasoning. You can add more at the table if you need to. You probably won’t. 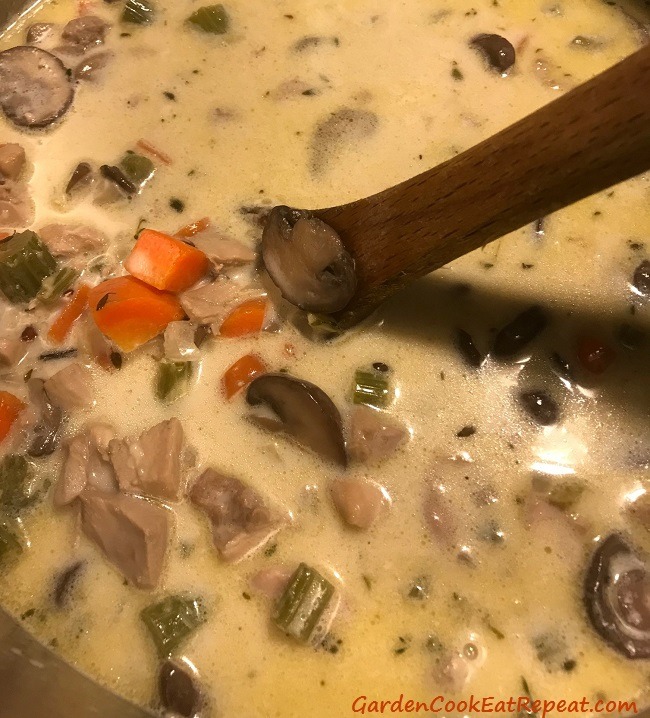 This soup was delicious! What a rich and decadent meal. Surprisingly we didn’t have any homemade bread, but we did have a few slices of Italian bread with sesame seeds left, so there was a bit of dipping while the soup cooled enough to eat. 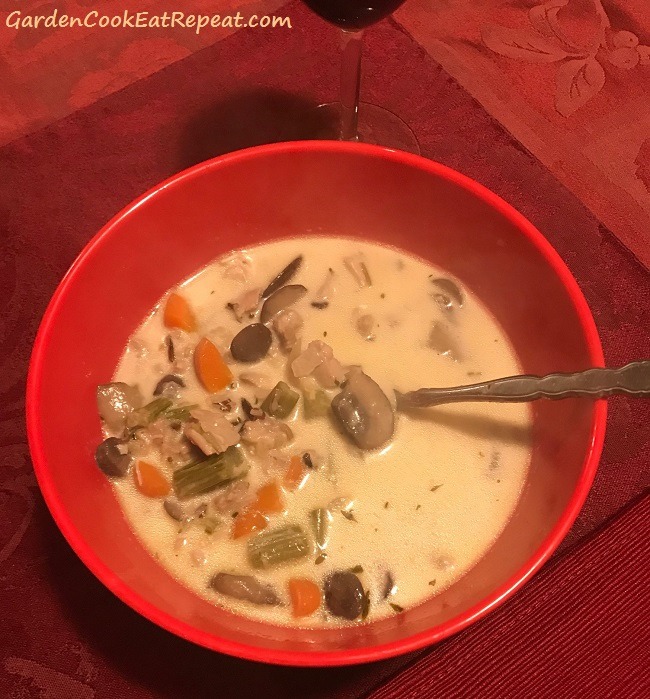 The soup lured Mr. Gordon into seconds – something he doesn’t often indulge in. It was truly a lovely meal on a cold fall night.

Give It a Try!

Let us know if you make this recipe from Closet Cooking – and what you think! Share your cooking thoughts in a comment below!